A Thesis Defense by Hannah Bruzzio 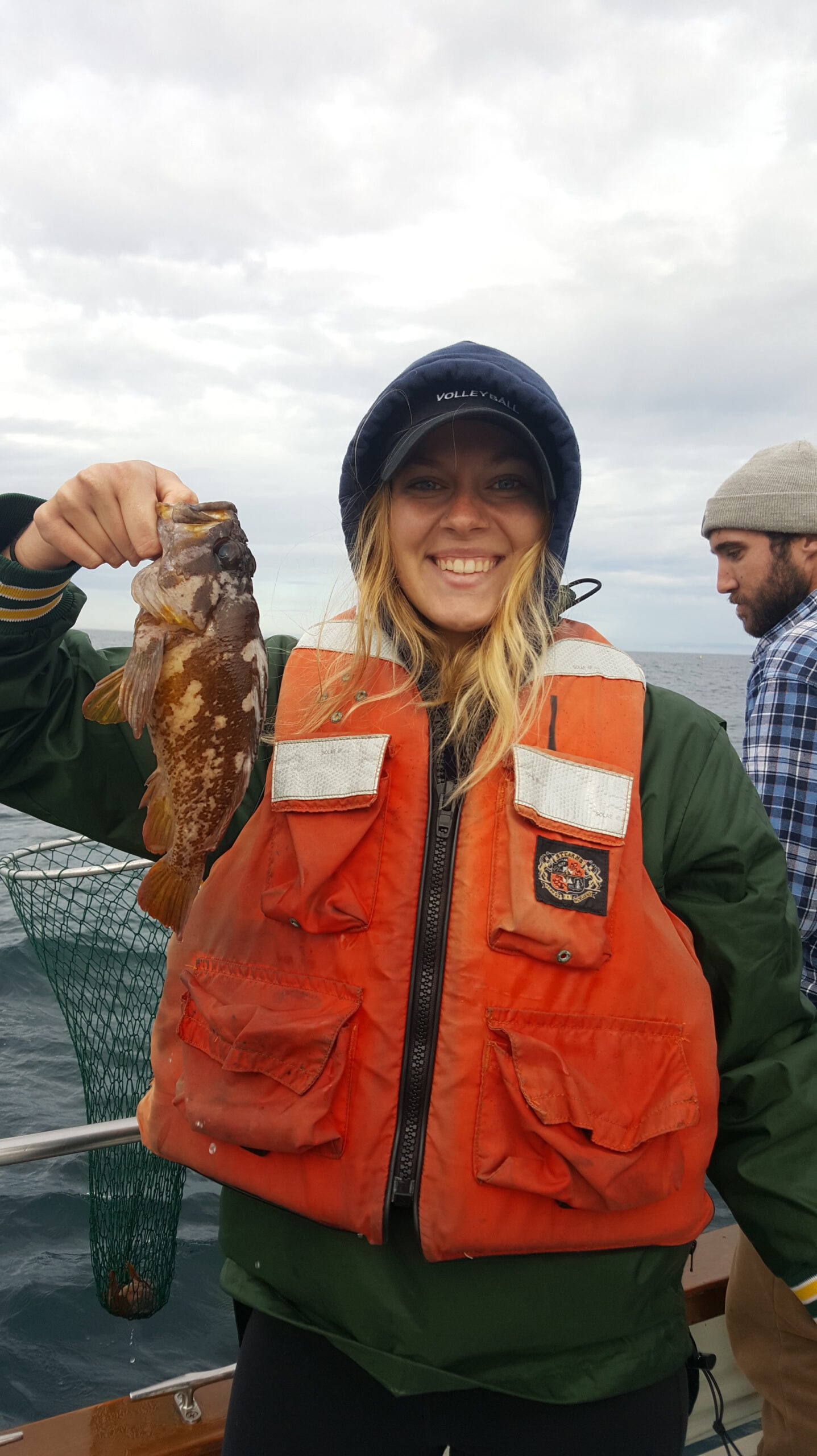 Hannah Bruzzio is a graduate student in the Ichthyology Lab at Moss Landing Marine Labs. In the spring of 2018, she got her BS from the College of William & Mary in Williamsburg, VA. While there she completed her honor’s thesis researching particle interactions with the gill arch/gill raker morphology of the American shad to investigate the fluid dynamics of filter-feeding fish. She joined MLML in the fall of 2018.
For her master’s thesis, Hannah looked at how the environmental stressors of ocean acidification and hypoxia affects the hormonal stress response of juvenile blue rockfish. In addition to her research, Hannah worked as the MLML Environmental, Health and Safety assistant under Jocelyn Douglas. She also designed the open house t-shirts for 2019, 2020 and 2022. She also volunteered at the Monterey Bay Aquarium where she worked with the jellyfish and schooling fish husbandry staff. In April of 2022, Hannah returned to the east coast to accept a job at the Institute of Marine and Environmental Technology (IMET) as the Senior Biological Technician for their Aquaculture Research Center (ARC) in Baltimore, MD. There she maintains populations of Atlantic salmon, Tilapia, Rainbow trout, Nurse Shark, Blue gill, Hybrid striped bass, Blue crab, White-leg shrimp and Zebrafish for use in a wide range of RAS-aquaculture based research projects. 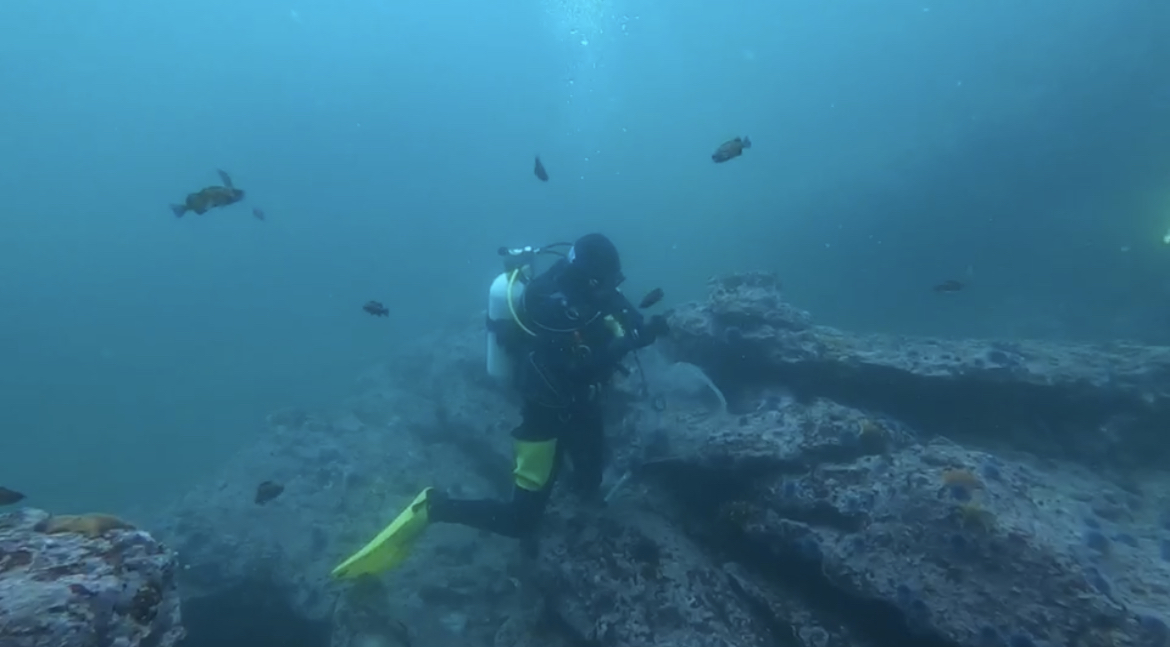 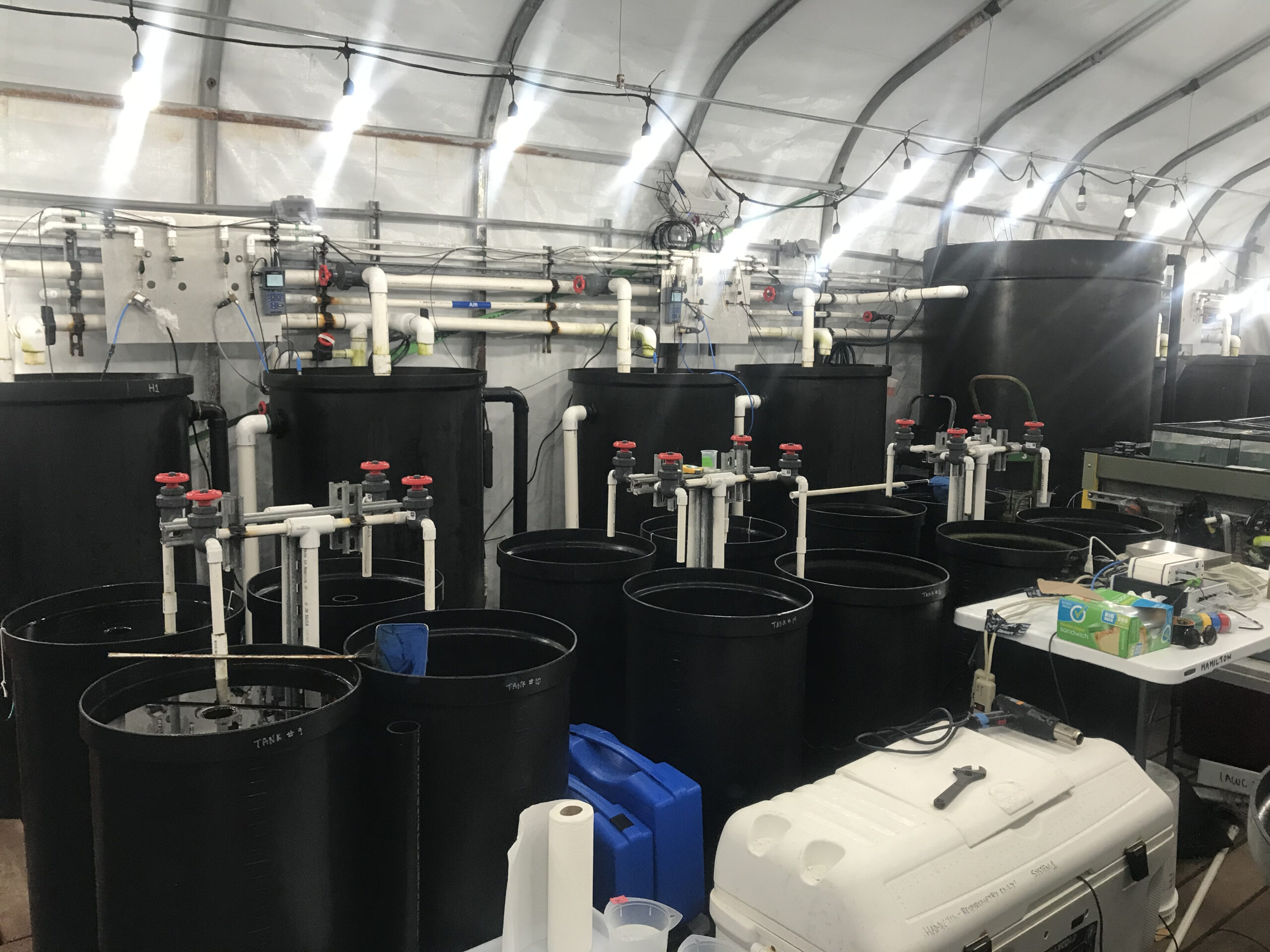 Global climate change is causing increasing ocean acidification (OA) and deoxygenation (hypoxia) of coastal oceans. Along the coast of California, where upwelling is a dominant seasonal physical process, these environmental stressors often co-occur and are intensified in nearshore ecosystems. For juvenile nearshore fishes, who spend a crucial developmental life stage in coastal kelp forests during the upwelling season, these stressors are experienced concurrently and may have large implications for fitness. Environmental stress can set off an endocrine response, which impacts physiology, energy allocation, growth, and behavior. To test the effects of climate change on juvenile blue rockfish, I measured the endocrine response to single and combined stressors of OA and hypoxia after one week of exposure. Assays of cortisol and IGF-1 hormone responses, served as proxies for stress and growth, respectively. Full organismal effects of environmental stressors were evaluated using a scototaxis (i.e., light/dark anxiety) behavior test, and measures of physiological changes in maximum metabolic rate (MMR) and body condition (i.e., Fulton’s K condition index). I found that peak (~1 hour) cortisol levels were highest in the single stressor low pH (7.3 pH), followed by the combined stressor (7.3 pH and 2.0 mg/L O2) and then the single stressor hypoxic treatment (2.0 mg/l O2). This high peak cortisol associated with low pH may indicate the role of cortisol in acid-base regulation. Only the low DO (dissolved oxygen) group did not exhibit a recovery of cortisol levels by the end of one week. There was no observable difference in IGF-1 in juvenile blue rockfish after a week of exposure to any of the pH or DO stressors. When cortisol levels were high, the same fish had low levels of IGF-1, and when cortisol levels were lower, the same fish had highly variable levels of IGF-1. At one-week of exposure, cortisol exhibited a positive relationship with MMR, such that higher stress levels were associated with greater oxygen consumption by the fish. MMR values themselves were highest in the low DO fish, which subsequently also had slightly higher cortisol levels at one-week. Juvenile blue rockfish were largely robust to any behavioral changes associated with stress across treatments. Hypoxic treatment fish had significantly lower body condition than fish from treatments with ambient DO levels after one week. Overall, the results indicated that pH levels influenced hormonal stress physiology, while DO levels contributed to observed differences in metabolism, body condition, and behavioral anxiety in juvenile blue rockfish. I was unable to tease apart and classify whether OA and hypoxia work in an additive, antagonistic, or synergistic way. Continued research should include more experimental stressor treatment levels of varying intensity of both individual and combined treatments as well as upwelling/relaxation fluctuating treatment levels. Elucidating the effects of climate change on fish endocrine response and physiology is important for fish population management and can help inform stock assessment models of blue rockfish in a rapidly changing ocean.