Moss Landing Marine Laboratories (MLML) administers a Master of Science degree in marine science, which is supported and administered by SJSU. The academic program is available to all students in the seven CSU consortium campuses, and is dedicated to excellence in both education and research. An outfitted marine operations department, active research diving program, and state of the art equipment and instrumentation allow for cutting edge research in a wide variety of disciplines including: marine ecology; the biology of marine plants, invertebrates, fishes, turtles, birds and mammals; oceanography and marine geology; chemistry and biogeochemistry. MLML's program is internationally-known for its hands-on, field-oriented approach that places our students, faculty, researchers and staff at the frontiers of marine science, where discoveries are being made worldwide. 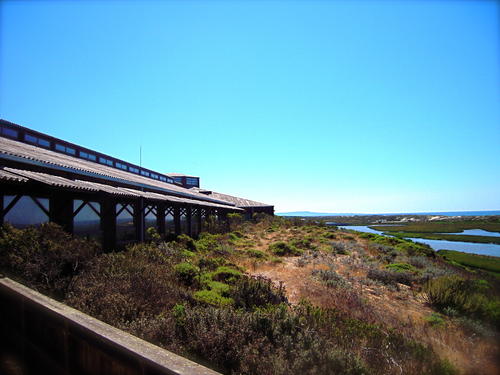 MLML is situated in an excellent location for the study of the marine world. The Monterey Submarine Canyon, the largest such feature on the west coast of North America, begins within a few hundred meters of the Moss Landing harbor and the MLML research fleet. To the east of MLML is the Elkhorn Slough, the largest tract of tidal salt marsh in California outside of San Francisco Bay, and an important site for shorebirds, sea otters, and fishes. To the north and south are sand dunes, sandy beaches, and extensive kelp forest habitats along the rocky shoreline. Some of the most productive kelp forests and intertidal areas can be found in this region. MLML also is located between two large upwelling centers, which provide nutrients that not only stimulate an incredible amount of productivity but also provide a wealth of opportunities to study coastal oceanic processes.

MLML prepares students for careers in science, education and outreach, conversation, policy, and management, as well as the pursuit of doctoral degrees related to the marine sciences. More than 640 students have earned their M.S. degrees from MLML.

One quarter of our last 238 graduates have gone on to PhD programs, and nine have earned other additional degrees (e.g. DVM, JD, MBA).

One-eighth are employed at Universities, including eleven who hold academic positions.

1a. Demonstrate an understanding of fundamental concepts in a particular category of oceanography and marine science.
1b. Be able to synthesize and integrate across all of these fields, yet achieve a depth of understanding in the student’s individual specialty or field of study.

2. Demonstrate the ability to critically analyze scientific research, whether the student’s own research, or that performed by others.

3. Pose relevant scientific hypotheses or questions that may then serve to guide thesis research.

4. Demonstrate proficiency in the design and implementation of experiments or data collection methodologies to address specific hypotheses/questions..

5. Master the skills and tools of data collection and analysis (including analytical and statistical techniques as appropriate) specific to the student’s scientific field of study.

6. Demonstrate the ability to place one's own research within the larger context of relevant field of scientific study and to clearly identify the implications of this research for that field.

7. Demonstrate proficiency in oral and written communication by being able to present research clearly and concisely. This includes thoughtful and thorough oral and written presentation of their thesis and their responses to questions.

• Completion of 30 units of coursework with a grade of 'B' or better, including:

• Submission of a committee-approved thesis.

• An oral thesis defense in the form of a seminar open to the general public.