Hosted by The Geological Oceanography Lab 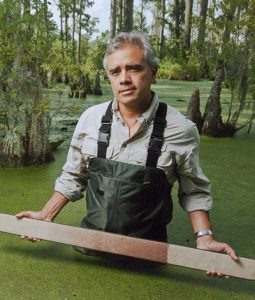 Jim Zachos's research interests encompass a wide variety of problems related to the biological, chemical, and climatic evolution of late Cretaceous and Cenozoic oceans. He measures the chemical composition of shells from marine sediments to reconstruct past changes in ocean temperature & circulation, continental ice-volume, productivity, and carbon cycling. His research is oriented toward identifying the mechanisms responsible for driving long and short-term changes in global climate.

Zachos, his students, and colleagues are currently participating in several projects oriented toward understanding the nature of rapid and extreme climate transitions in earth's past. These projects involve the application of stable isotope and trace metal ratios to reconstruct the ocean temperature and chemistry for several episodes of extreme climates including the Paleocene-Eocene Thermal Maximum (~56 mya), the middle- and early Eocene Climatic Optimums, as well as subsequent long-term cooling trends. This also includes work to quantify rare episodes of ocean acidification (acid oceans) that accompanied several of the transient warmings. He is also utilizing sediment archives to establish the approximate timing and extent of continental glaciations during the Oligocene and Miocene epochs (between 15 to 35 million years ago).