A Thesis Defense by Matthew Jew

During his time in graduate school, he shared his passions for marine research and quantitative analysis by teaching in the Marine Science and Mathematics departments at CSU Monterey Bay.  His research at MLML was very diverse, he has kept busy working on numerous projects with a variety of researchers.  He published a paper with Dr. Dave Ebert that redefined the taxonomic description of Hydrolagus macrophthalmus.  He was a California Sea Grant trainee working with Dr. Iliana Ruiz-Cooley learning to trace Domoic Acid through the food web.  And finally, he was advised on his thesis by Dr. Scott Hamilton, Dr. Gitte McDonald, and Keith Bosley evaluating the trophic habits of two deep-sea catsharks.
Now that his time at MLML is nearing it's end, look for him underwater in the spectacular kelp forests for Monterey Bay! 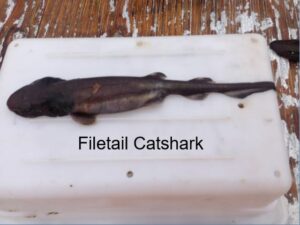 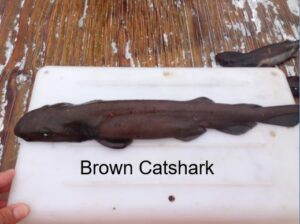 In marine communities, there are often multiple species that occupy the same or similar niches. When resources are in short supply, competitive interactions can negatively affect the survival of one or both of the species involved. Understanding the trophic habits and interactions of species helps explain their role in a given ecosystem. Additionally, knowing the trophic habits of targeted or bycaught species captured in fisheries can help to influence management decisions on an ecosystem level. Apristurus brunneus and Parmaturus xaniurus (Family: Scyliorhinidae) are abundant deep-sea predators native to the Northeastern Pacific Ocean. Central California offers a unique opportunity to study these sympatric species in a location where they have large populations and the potential to compete for dietary resources. This study identifies: (1) the dietary composition each predator; (2) what biological and environmental factors are associated with variation in their trophic habits; (3) the trophic level of each species; and (4) the level of trophic overlap and potential for interspecific competition between the two species. To investigate the trophic habits of these two predators, this study used two complimentary techniques: stomach content analysis (SCA) and stable isotope analysis (SIA). Specimen from both species were collected during fishery-independent trawl surveys along the central California coast. Stomachs (for SCA) and dorsal white muscle tissue (for SIA) were removed from sharks after biological and catch data were recorded for each individual, including potential explanatory variables (e.g., depth, latitude, longitude, maturity, season, sex, trawl composition, and total length). Trophic habits and trophic position were calculated for each species independently and the level of trophic overlap between each species were calculated for SCA and SIA. Both shark species consumed the same three major prey groups (shrimp, squid, and fishes), however A. brunneus exhibited a similar preference for all three prey categories, while P. xaniurus placed a disproportional preference for shrimp. Apristurus brunneus diet composition varied with sampling season, latitude, sex, and total length. In contrast, the diet of P. xaniurus only varied with sampling season and total length. The results of the SIA indicated similar results. In A. brunneus, δ 15 N varied with latitude, sex, and total length while δ 13 C varied with latitude and total length. Parmaturus xaniurus’ SIA variation was as a function of total length, latitude, and season for δ 15 N and δ 13 C varied with latitude and season. SCA and SIA metrics indicated that the size of dietary niche was consistently smaller for P. xaniurus. Species with a smaller niche size are considered to implement specialist feeding strategy, whereas a much larger niche (like A. brunneus) would indicate generalist diet. Despite the differences in the size of the dietary niche, both SCA and SIA found significant trophic overlap between the two species, such that P. xaniurus samples are nearly completely contained within the isotopic space of A. brunneus. While there is significant dietary overlap, in order for there to be competition between species resources must be limiting. In central California, resources are likely not limiting and these two species have implemented feeding strategies that maximize their net energy gain even when a strong co-competitor is present. Ultimately, the knowledge gained on the dietary and competitive habits of these two species improves our understanding of their role in the deep-sea ecosystem of central California and this new knowledge will aid managers in the implementation of ecosystem-based fisheries management. 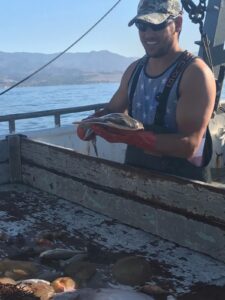