(or Watch it Live here!) 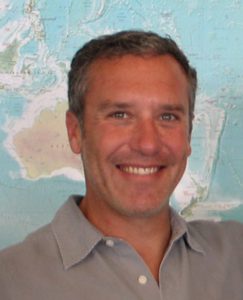 Curt’s research focuses on the quantitative study of hydrodynamics, sediment transport, and geomorphology in coastal and marine environments across the Pacific, Atlantic, Arctic, and Indian Oceans.

Currently, Curt is the Chief Scientist of the USGS Coral Reef Project and leads a research team of 13 PhD- and MSc-level scientists that examines the geologic and oceanographic processes that affect the sustainability of US coral reefs and reef-lined coasts, authoring more than 130 scientific papers, reports, and book chapters on these topics.

How long will atolls be able to sustain human habitation?

Although absolute rates of sea-level rise (SLR) and projected 2100 global sea levels are still under deliberation, the models consistently suggest that eustatic sea level will be considerably higher by the end of the century and rates of SLR will far outstrip vertical coral-reef accretion rates, which will have a profound impact on coral reef-lined islands. Atoll islands are low-lying carbonate Holocene features, many of which have maximum elevations of less than 4 m, that support 1000 year-old cultures, yet the amount of land and water available for human habitation, water and food sources, and ecosystems is limited and extremely vulnerable to wave-driven flooding and inundation from SLR. The USGS is leading a multi-agency, multidisciplinary effort to understand how SLR and climate change may impact low-lying atoll islands in Micronesia using field observations and global climate model outputs to drive coupled hydrodynamic and hydrogeologic models for a number of SLR and climate change scenarios. Rising sea levels and climate change will reduce the ability of coral reefs to mitigate wave-driven flooding in the future, leading to more frequent, persistent, and extreme marine flooding and overwash on atoll islands, damaging infrastructure, habitats, and agriculture. More importantly, the increased marine flooding, along with decreased precipitation, will result in salinization the islands’ limited freshwater drinking supplies with such frequency that the freshwater resources will not be able to recover. Our findings suggest that such “tipping points” – when the islands can no longer sustain a freshwater lens and thus human habitation – will likely occur in decades, not centuries as previously thought, which will result in significant geopolitical issues when it becomes necessary to abandon and relocate island-states.