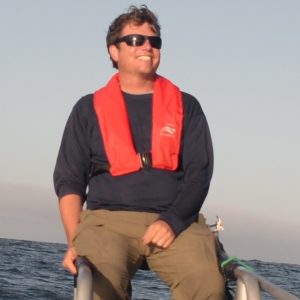 David Cade was an educator (6 years in the outdoors and 6 years in a math classroom) before returning to science to pursue his passions. After earning a master’s degree in education at Stanford University in 2005 and a master’s in oceanography at Oregon State University in 2014, Cade is now in the midst of his Ph.D. work in Jeremy Goldbogen’s lab at Stanford University’s Hopkins Marine Station where he studies the foraging ecology of baleen whales.

For nearly all of human existence on the sea, our understanding of whales has been limited to what we can observe at the surface. For fully aquatic animals such as these, however, time spent on the surface is really a tiny fraction of the life cycle of these largest predators on the planet. Basic questions about feeding behavior and ecology have only begun to be answered in the last fifteen years with the advent of animal-borne sensors capable of logging cetacean behavior underwater. Only in the last three years have sensors that measure orientation and motion been combined with high-quality video cameras to provide us with a whale's eye view of the feeding events that are so critical to overall population recovery from 20th century lows. These devices have allowed old hypotheses to be tested, and new questions and insights have been generated with every new deployment.