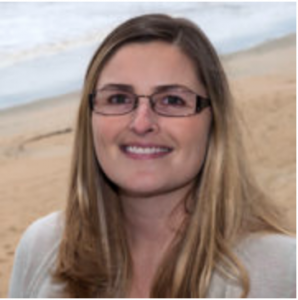 Andrea Fassbender received her undergraduate degree in chemistry at the University of British Columbia (2007) then completed a Graduate Certificate in Climate Science (2009) and earned both her Master’s Degree (2010) and Ph.D. (2014) in Oceanography at the University of Washington. For her postdoc, she collaborated with NOAA’s Pacific Marine Environmental Laboratory, the Washington State Department of Ecology, and the Washington Ocean Acidification Center to characterize carbonate chemistry throughout Washington’s marine surface waters as a UCAR PACE Postdoctoral Fellow. In 2017, she joined MBARI to lead a group studying marine biogeochemical cycling and the ocean’s role in global climate through the carbon cycle.

Abstract: On thousand-year timescales, the vast majority of anthropogenic carbon will be distributed and stored within the ocean; however, humans are modifying the carbon cycle much more rapidly than the ocean circulates. As a result, large changes in the carbon dioxide (CO2) content of the atmosphere and upper ocean are occurring, as is the amount of carbon stored within land plants. The ocean has absorbed an estimated 30% of the anthropogenic carbon released to the atmosphere since industrialization, and it has long been recognized that the efficiency of ocean CO2 uptake will decline over time due to anticipated, long-term changes in ocean chemistry. What remains less clear is how anthropogenic carbon interacts with natural carbon in the ocean to influence carbon cycle processes occurring on shorter timescales, such as seasons. Thus, a lingering question is: will the modern pattern of ocean CO2 uptake persist? In this talk, I will discuss ways in which natural and anthropogenic carbon interact to modify the fingerprint of marine carbon cycle processes, how this many influence air-sea CO2 exchange, and why this provides further incentive to characterize the biological pump for the sake of global climate projections.