Hosted by the Fisheries and Conservation Biology Lab 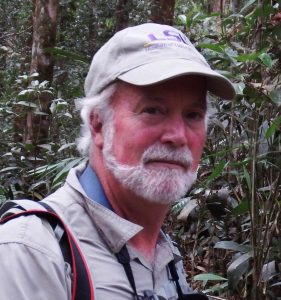 Scott is a native to the California Bay Area.  He received his B.S. and M.S. in Zoology from Arizona State University and received his Ph.D. from the State University of New York.  His research focused on avian migration and he is a Von Humboldt Fellow of the Max Planck Institute for Behavioral Physiology.  He has observed birds in the California current on hundreds of occasions for over 50 years.  He was the Regional Editor for seabird section for the journal North American Birds for 10 years and coauthored the seabirds section of the Monterey Bay National Marine Sanctuary Site Characterization.  Currently, he is coauthoring a major study on the near California endemic seabird the Ashy Storm-Petrel.

Scott is Senior Ornithologist and Vice President at H. T. Harvey and Associates, an ecological consulting company started by Tom Harvey, Jim Harvey’s father, nearly 50 years ago.  This consulting group is relatively unique in that, in addition to applied ecology consulting services, it conducts basic research on marine systems funded by NSF, NOAA and others, and the group has contributed over 500 referred scientific publications.

A number of offshore wind projects exist in Europe and there is one project off the east coast of North America.  These projects are all nearshore projects in shallow water.  The potential for projects off California in deep water over the Outer Continental Shelf (OCS) is being considered by the Bureau of Ocean Energy Management and the California Energy Commission. Such projects would use turbines on floating platforms rather than turbines anchored to the ocean bottom.  Whereas some of the information on avian response to nearshore turbines in Europe can be used to inform risk assessments off California, especially nearshore wind projects if proposed, they would have very limited application to turbines off the OCS. The nutrient rich California current is used by large numbers of offshore pelagic birds, many of which disperse long distances to reach it.  Most of these species are quite different from those in nearshore Europe, and in many cases far offshore of Europe as well. I will also discuss the differences between the offshore wind projects in Europe and any proposed off California with respect to landbird migrants over the ocean. Although my specialty is birds, I will touch on potential concerns for some other offshore taxa as well.

I will be discussing some of the fundamental differences in the ocean avian communities in the Atlantic and the Pacific, and how those differences need to be taken into account when approaching risk assessments in the California Current.  Additionally, I will be discussing existing data that can be used to inform risk assessments, remaining data gaps, and possible next steps.