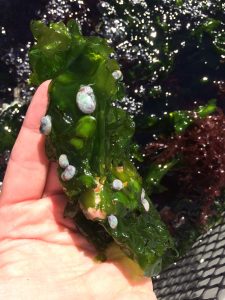 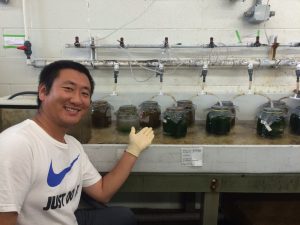 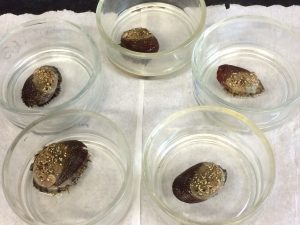 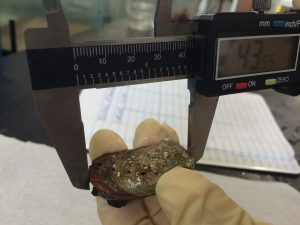 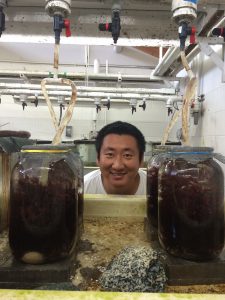 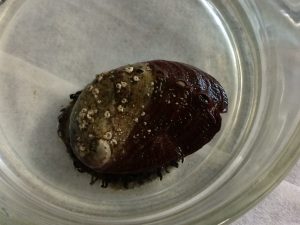 A Thesis Defense by Stephan A. Bitterwolf 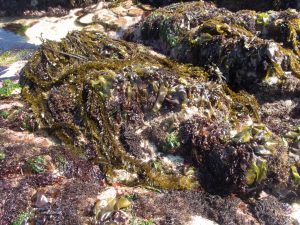 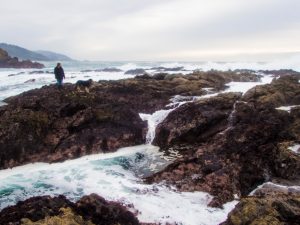 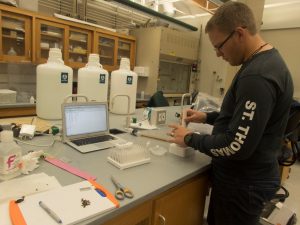 California’s intertidal seaweeds Mazzaella flaccida and Mazzaella splendens reside in different intertidal zones. The yellow-green M. flaccida is found in the high- and mid-intertidal, while the brown-purple M. splendens is found in the mid- and low-intertidal. These differences in intertidal position and blade color, in addition to minute differences in morphology, are typically used to differentiate these species in the field. However, a reciprocal transplant study by Foster (1982) found that, not only can M. flaccida and M. splendens reside in each other’s zone, but the color of M. splendens can change to the yellow-green of M. flaccida. Thus, Foster (1982) suggested that these two species may be conspecifics. Presently, genetic evidence supports the separation of both species, however, little progress has been made towards determining the cause, mechanism, and impact of this chromatic plasticity on thallus physiology. The present study serves to further our understanding of this chromatic plasticity in Mazzaella through a series of field and laboratory experiments. In the field experiment, 360 individuals (180 of each species, 90 controls and 90 experimental) were reciprocally transplanted within the intertidal zones of 3 central California sites. Thereafter, transplants were monitored monthly from June – October for blade size and presence. In October, all transplants were removed for pigment analysis. In the laboratory experiments pigment concentrations of both species were quantified from seaweeds cultured in reduced or replete irradiances and nitrate concentrations. Differences in blade size, pigment composition, and survival between site, intertidal zone, species, and culture treatment were investigated with 2-way ANOVAs and non-parametric tests. In these experiments: (1) greening was documented only for seaweeds in the culture experiments, (2) survival was greatest in the low intertidal zone, (3) high intertidal seaweeds contained greater photoprotective pigment content, (4) M. flaccida exhibited increased capacity to regulate photoprotective pigments, and 5) M. splendens exhibited increased capacity of phycobilin pigments. The results of this study illustrate how these intertidal seaweeds can survive adverse conditions such as nutrient limitation or increased light stress/desiccation by cannibalizing phycobiliproteins and increasing photoprotective pigments. The differing extent of each species to regulate photoprotective and phycobilin pigments supports their current classification as separate species.

Acknowledgements from Stephan: This work would not have been possible without the support I received from mentors, labmates, students, family, and friends. Thanks all :D!

Dr. Nyssa Silbiger is currently an Assistant Professor in the Department of Biology at CSUN.  She did her postdoc at UC Irvine, PhD at the University of Hawaii at Manoa, Masters at UNC Chapel Hill, and Bachelors at Florida State University.  During her PhD, she was a NOAA Dr. Nancy Foster Scholar.  Her research broadly focuses on understanding interactions between anthropogenic stressors and natural variability on ecosystem processes. 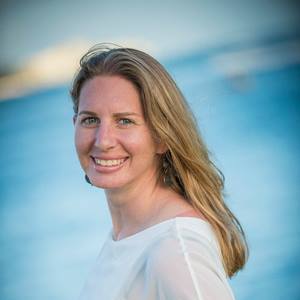 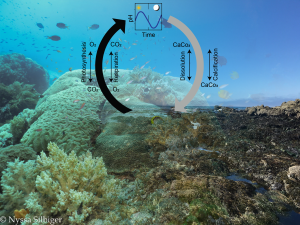 A Thesis Defense by Jen Keliher 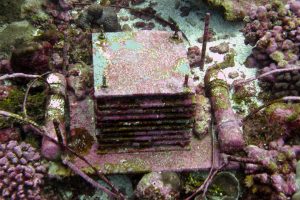 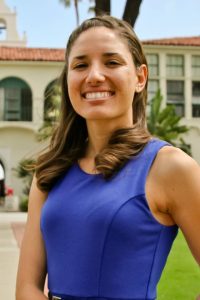 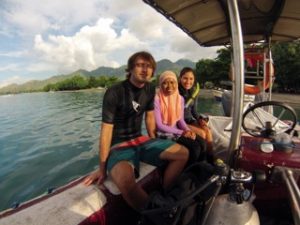 Jen’s thesis is investigating microbial metagenomes from cryptofaunal sponges and ascidians from Moorea, French Polynesia. She is interested in the role of microbes in affecting the health of coral reef invertebrates and how host-associations change in response to human-induced stressors. What excites her most about this research is broadening our understanding of how microbes are integrated in the larger reef system.
Jen is also interested in educational outreach and capacity-building in youth. She currently a Bilingual Education Specialist at the Monterey Bay Aquarium teaching preK-12 school programs and co-leading two middle school programs: Young Women in Science and the Student Oceanography Club. As part of Dr. Geller’s NSF Partnerships for International Research and Education (PIRE) project, Jen is helping build capacity in students involved in the US-Indonesian partnership by having helped with the 2013 Diversity Project class in Bali and by working with Indonesian students.
Jen received her B.S. in Marine Biology with a minor in Interdisciplinary studies from San Diego State University. As an undergraduate Jen worked on a diversity of projects including an endocrine study on Arctic bowhead whales, a genetic study on Mako and Thresher sharks, a behavioral ecology study on resident and transient killer whales, and other ecology projects in the wetland habitats of Baton Rouge, Louisiana and San Diego, California. She is an active member of MLML’s AAUS scientific dive program, volunteers much of her time in her faith community, and is a mentor for undergraduate students in the Enlace Program at Evergreen College in San Jose.

A Thesis Defense by Paul Clerkin 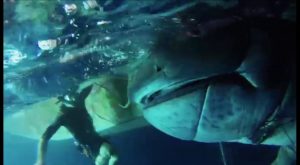 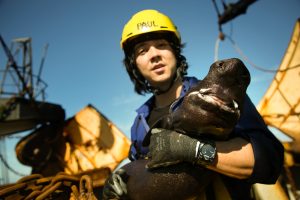 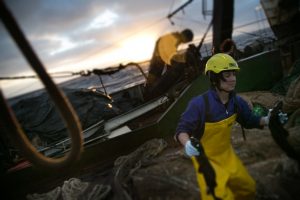 After completing his undergraduate degree, he served several deployments as a shipboard Certified Fisheries Observer with the National Marine Fisheries Service in the Bering Sea out of Dutch Harbor, Alaska.  In 2011, he began his studies at MLML’s Pacific Shark Research Center under his adviser, Dr. David Ebert.  He has worked with Dr. Ebert to instruct chondrichthyans workshops on the island nations of Mauritius and the Seychelles for the Food and Agriculture Organization of the United Nations.  He also participated in a cruise in the Southern East Atlantic as a shark expert for FAO/UN.

During the last quarter of a century, the conservation and management of chondrichthyans (collectively, sharks, rays, and chimaeras) has received considerable focus. This is especially true for deep-sea chondrichthyans. As technologically advanced fisheries expand into deeper waters of the high seas, new chondrichthyan species are being discovered and described at an increasing rate. The objectives of this study were to investigate the deep-sea chondricthyan fauna in a remote region of the Southwestern Indian Ocean Offshore and provide descriptions of three species of Chimaeridae previously unknown to science, and collect and analyze biological parameters relating to the life histories of all shark species encountered. Specimens were collected as bycatch in deep-sea fisheries from 46 sites along deepwater seamounts of the Southwest Indian Ocean Ridge and the Madagascar Ridge. Among the species encountered were three relatively large chimaeroids, which upon closer examination, were determined to be distinct from all other known members of the family. A description these three new species is presented. A total of 4009 specimens were examined and sex ratios, size range, smallest mature, largest immature, and length at 50% maturity (LT50) calculated. Detailed information is presented on the reproductive biology, life history, and distribution of 31 species representing 14 genera. 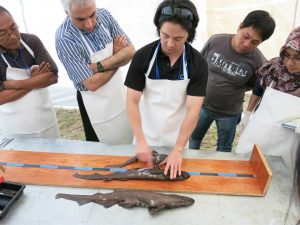 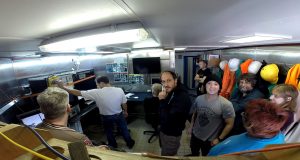 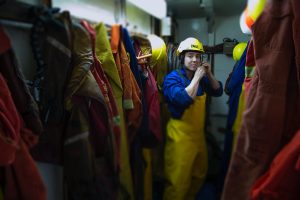 A new study is out with MLML's Research Faculty member, Dr. Iliana Ruiz-Cooley, as first author and includes co-authors from Scripps Institution of Oceanography and NOAA Fisheries West Coast. Their research challenges previous notions suggesting the pelagic food chain of the California Current was stable and therefore not easily affected by environmental disturbances. 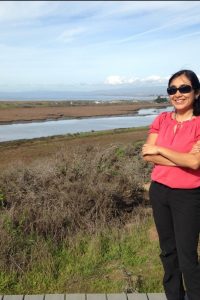 Moss Landing Marine Laboratories has a rich history of providing training and resources for research diving.  John Heine graduated in 1982 with a M.S. from MLML, while working with Dr. Mike Foster, and later became the Diving Safety Officer (DSO) for MLML from 1985 – 2002.  John has extensive experience diving from the Arctic to the Antarctic.  John has authored a number of books on research diving and he recently was the author and technical editor for the new 800-page NOAA Diving Manual.  You can read more about Diving at MLML during John’s time as DSO in the blog he wrote last year. 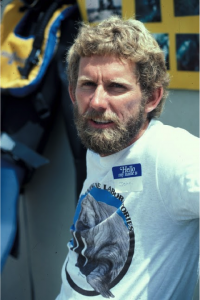 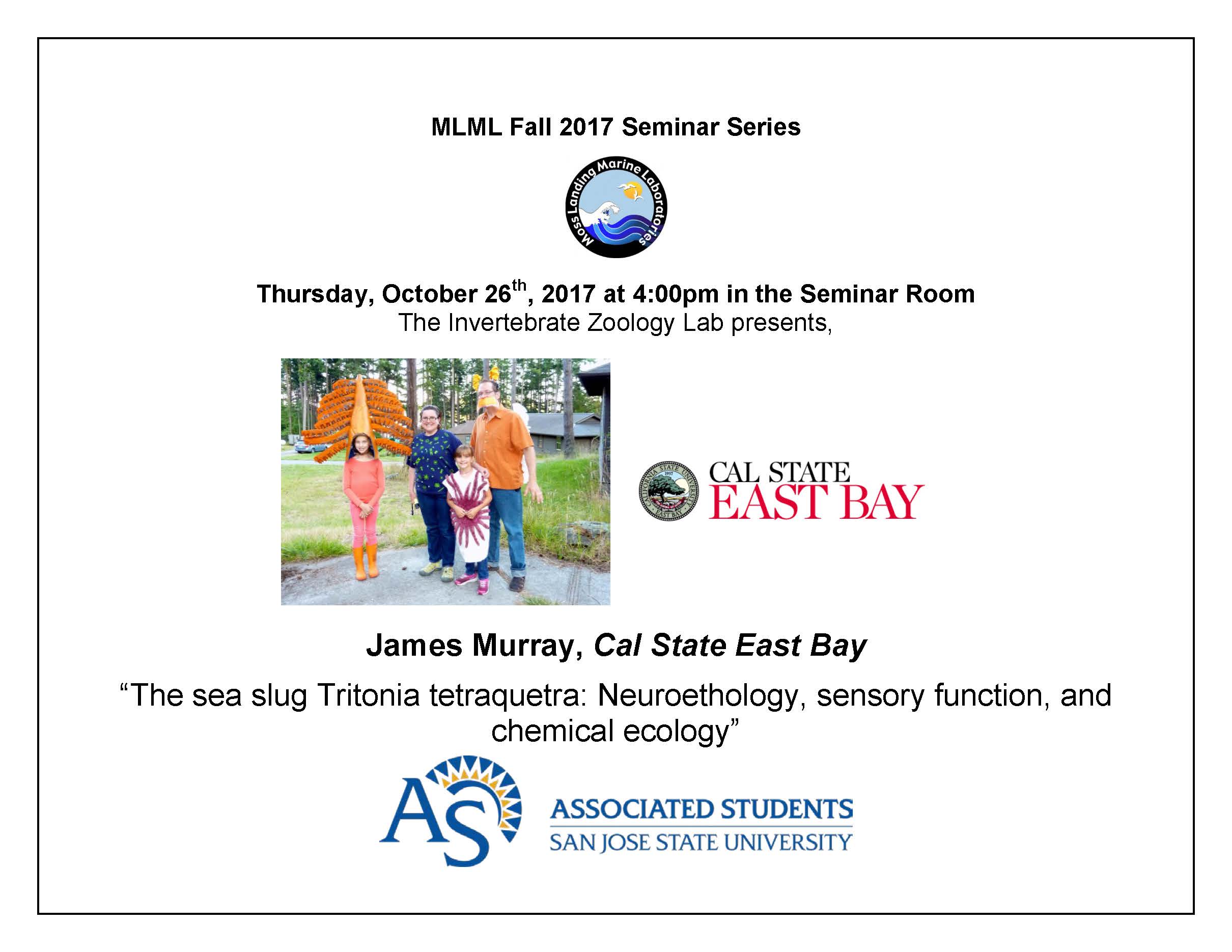 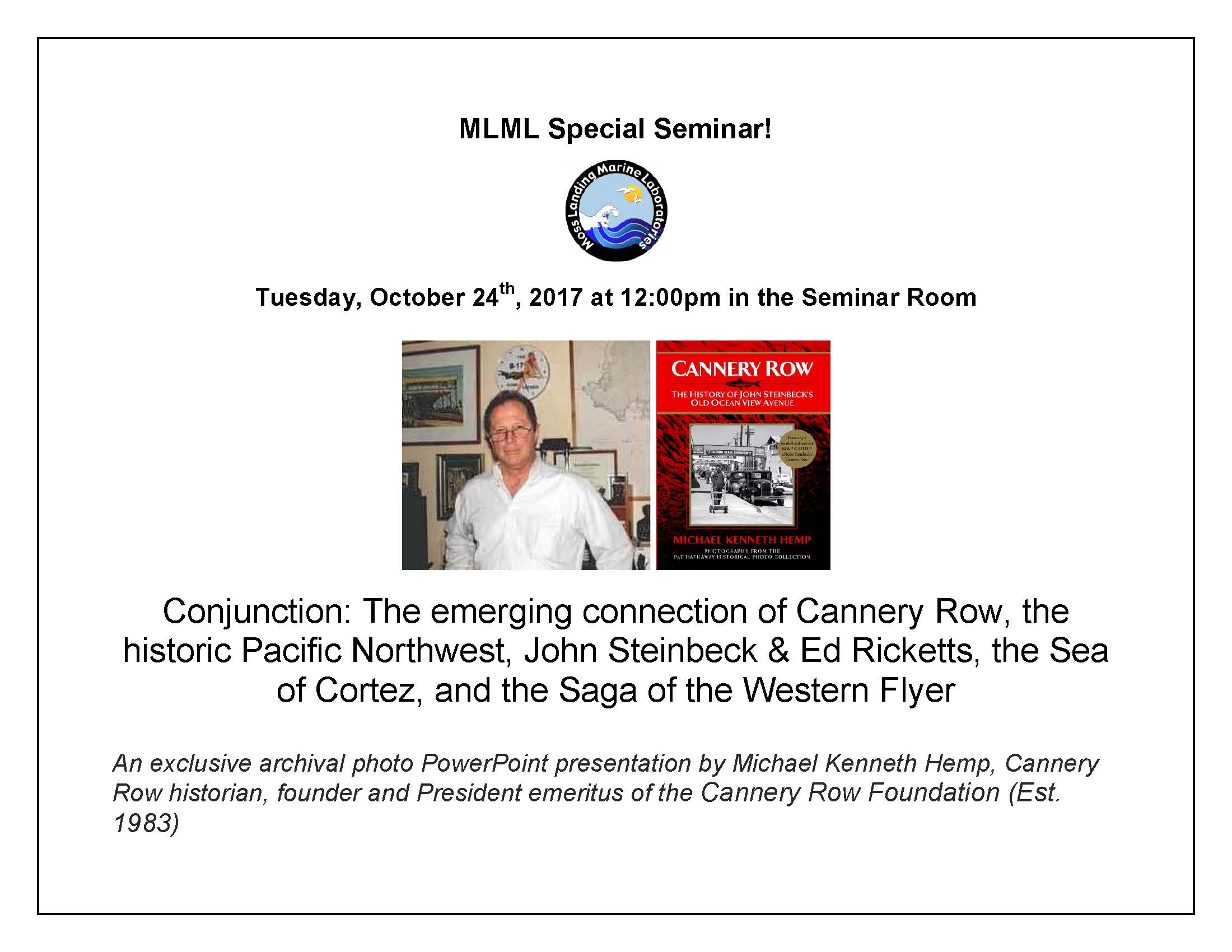 A Thesis Defense by Dorota Szuta 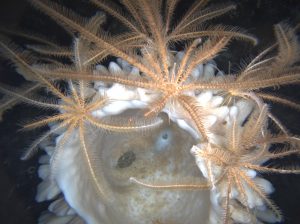 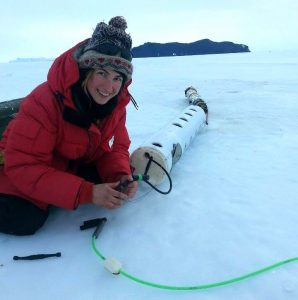 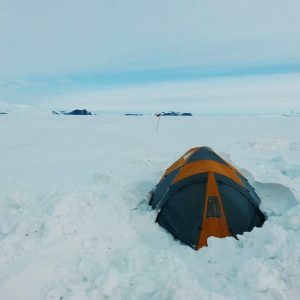 Dorota Szuta is a Master’s student under the guidance of Dr. Stacy Kim of the Benthic Ecology lab and Dr. Ivano Aiello of the Geological Oceanography lab. She earned her BS degree in Marine Biology at UC Santa Cruz in 2009. After her undergraduate work, she worked in the Benthic Ecology lab as a field diver and lab tech for two years. In her free time, she likes to play music, make art, and pet dogs. Her Master's thesis focuses on communities of benthic invertebrates under ice in Antarctica.

The Ross Sea, Antarctica is a deep bay of the Southern Ocean that exhibits seasonal sea ice and is adjacent to a permanent ice shelf overlying seawater. Though the shallow-water seafloor communities in the Ross Sea are known to be high in species richness and abundance, the deeper sublittoral zone (approximately 25 m – 200 m) has been generally understudied and, especially under the Ross Ice Shelf, the benthic community composition is largely unknown. In 2008 and 2009, imagery of the seafloor at two sites under the permanent Ross Ice Shelf and two sites under the seasonal ice in the Ross Sea was collected via remotely operated vehicle (ROV) at depths to 300 m. Several patterns in Antarctic benthic communities were seen over multiple environmental gradients. Species abundance typically exhibited a unimodal distribution with depth, reflecting a food limitation at the deep end and potentially ice disturbance on the shallow end. Diversity and depth had quadratic relationship at two of three sites encompassing a depth gradient. In terms of functional groups, the proportion of suspension feeders decreased with depth at one site, and no pattern was found at other sites. The group sessile predators, comprised of several species of anemones, increased with depth proportionally, suggesting that they use a range of feeding strategies to adapt to life at depth. Benthic communities under seasonal ice were different than those under permanent ice shelves, with higher overall species diversity, a greater proportion of suspension feeders, and a degree of magnitude higher abundance. 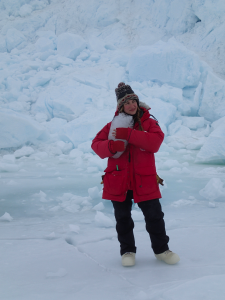 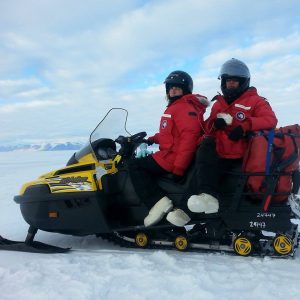