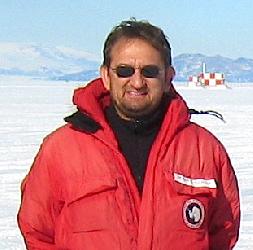 Slawek Tulaczyk focuses his research on ice sheets and glaciers as dynamic features interacting with geologic, hydrologic, and climatic processes on different timescales. Much of his glaciological work is based on data constraining the recent behavior of the West Antarctic ice sheet.

One of the most important current goals of Tulaczyk's research is to test the idea that this marine ice sheet may collapse and contribute significantly to the ongoing global sea level rise. To do that, he investigates the physical controls on ice flow velocity and constructs quantitative models of ice flow dynamics. In addition to elucidating the possible fate of the West Antarctic ice sheet, this work enhances our general understanding of the feedbacks between ice-sheet behavior and climate changes. Large ice sheets respond to climate but they may play the role of pacemakers of climate fluctuations as well. It appears that behavior of ice sheets is modulated to a significant extent by the underlying geology.

Tulaczyk is exploring these geologic controls through sedimentological and geochemical analysis of subglacial sediment samples from West Antarctica. This line of research leads to the general questions regarding the mechanisms of glacial erosion, sediment transport, and deposition. Tulaczyk has used a variety of data sources (remote sensing, borehole experiments, subglacial sediment samples) to constrain the physics of the subglacial environment and its role in controlling ice flow velocities. His interest in deformation of ice and sediments leads to involvement in research related to such practical problems like landsliding and its triggering by climatically extreme conditions.

Liquid water is scant in cold polar regions but it plays a key role in biological, geochemical, and glaciologic processes in these areas that are sensitive to climate changes and serve as potential terrestrial analogs of extraterrestrial life habitats on cold planetary bodies. Here we report the results of a regional AEM (Airborne Electro Magnetic) survey which collected nearly 3000 km of subsurface electrical resistivity profiles down to depths of up to ca. 600m sampling ca. 20,000 square kilometers in the McMurdo Dry Valleys (MDV). Electrical resistivity provides a good indicator of subsurface liquid water because frozen geologic materials, as well as ice, have very high electrical resistivity (typically >>1000 ohm-m) while water-bearing geologic units can have orders of magnitude lower resistivity (10-1000 ohm-m). The AEM survey reveals widespread, but not omnipresent, subsurface brine systems in the study region. They occur near the coast and beneath the floors of major valleys connected to the East Antarctic Ice Sheet (e.g., Ferrar, Taylor, McKay) but are not present in similarly large valleys that lack a modern connection to the interior of the East Antarctic Ice Sheet (e.g., Wright and Victoria). This spatial relationship suggests that brines detected by our survey may be transported into the MDVs by subsurface flow from beneath the ice sheet. Our investigations reveal a hydrogeologic system that is quite different than groundwater systems typical of coastal zones of other continents. However, this briny system may be representative of much of the ca. 24,000 km of Antarctic coastline and may deliver nutrients to the coastal ocean through submarine groundwater discharge.