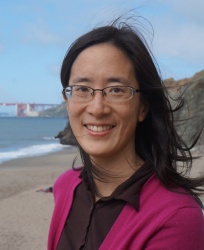 Dr. Lam is a “marine particle geochemist” interested in the role that marine particles play in the biogeochemical cycling of major and minor elements in the ocean such as carbon, iron, and other trace elements. This includes the factors affecting the efficiency of the biological carbon pump; the past and current role of iron in stimulating primary production; the chemical speciation and bioavailability of marine particulate iron; the role of major particle composition on particle export (the ballast hypothesis) and on trace metal scavenging; and much more! She is actively involved in the International GEOTRACES program, which is greatly expanding our understanding of the cycling of trace elements in the ocean, and revealing new questions about the role of particles every day.

The GP16 Eastern Pacific Zonal Transect cruise from Peru to Tahiti in 2013 along 12-15°S crossed the large eastern tropical South Pacific oxygen deficient zone (ODZ) in the eastern half of the transect, which was expected to be an important source of dissolved iron into the ocean interior.  Contrary to expectations, there was no significant iron plume in the heart of the ODZ around 250 m that extended beyond the coastal margin, despite the ODZ penetrating several thousand of kilometers into the interior.  Surprisingly, a deep coastal iron plume in oxygenated waters centered around 2000 m was observed to penetrate >1000 km into the interior. In this talk, I examine the possible reasons behind the unexpected high Fe from the oxygenated deep slope relative to the more reducing ODZ above.