Hosted by the Vertebrate Ecology Lab

(or Watch it Live here!) 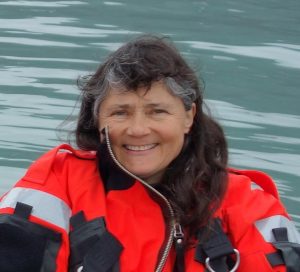 Dr. Blackwell has been working with large marine vertebrates for nearly 30 years - northern and southern elephant seals, Baltic grey seals, albacore tuna, Atlantic and Pacific bluefin tuna, bowhead whales, and narwhals, to name a few.  In the early stages of her career she was involved in the design and manufacture of several types of seal data loggers, recording parameters such as depth, temperature, heart rate, swim speed, activity levels, and bioluminescence.  She joined Greeneridge in May 2000 and has since collected and analyzed acoustic data on man-made sounds, such as those produced by impact and vibratory pile-driving, airgun pulses, and numerous construction activities, to assess their range and impact on marine vertebrates, mostly marine mammals.  More recently she has combined these two interests—in collecting data using tags and in assessing the effects of man-made sounds on marine animals—to examine how East Greenland narwhals react to sounds from airgun pulses, which are used the world over in seismic exploration for oil and gas.  She is the lead author of 12 refereed journal articles and a co-author in 31 others.  She is a member of the Acoustical Society of America (and a Fellow since 2008), the Society for Marine Mammalogy, and Sigma Xi (National Society for Scientific Research).