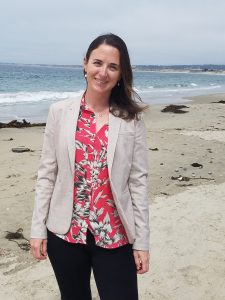 Dr. Mara M. Orescanin has been an Assistant Professor in the Department of Oceanography at the Naval Postgraduate School (NPS) since 2016.  Here, her research focuses on coastal physical oceanography relating to exchange between land and sea through rivers, inlets, marshes, and estuaries. She is currently supervising four Master’s students whose projects span ephemeral rivers using novel UAV imaging techniques, plume/wave hydrodynamics, as well as numerically modeling storm surge in small tidal inlet systems.  She believes in an hands-on approach to teaching and mentoring geared at stimulating active learning and has mentored students at all levels from middle school through graduate school.  Prof. Orescanin also teaches several classes to active duty naval METOC (meteorology and oceanography) officers at NPS including Nearshore Processes, Ocean Dynamics II: Waves and Instabilities, and Littoral Field Methods.

Dr. Orescanin received her B.A. with distinction in physics from Carleton College, Northfield, MN, where she discovered her passion for teaching as well as engaging in research outdoors.  After her undergraduate degree, Dr. Orescanin received two M.Sc. degrees in 2009 from the University of Illinois, Urbana, IL, in geology and in theoretical and applied mechanics, where she studied both explosive multiphase flows from volcanoes and the flow of blood cells through small capillaries.  Here, she realized her passion for the beach, and completed her Ph. D. in 2015 through the Massachusetts Institute of Technology/Woods Hole Oceanographic Institution’s Joint Program in Oceanography, in the Department of Applied Ocean Sciences and Engineering.  She also has worked as a coastal engineer/consultant at the Woods Hole Group from 2014-2017 focusing on observations and numerical modeling of tidal marsh restoration projects.

Observations of Intermittent Breaching at the Carmel River, CA

Ephemeral rivers provide unpredictable transport from back lagoons to the coastal ocean critical to biological processes such as larval transport, and understanding the relative role of discharge, tides, and waves is critical to understanding the expected area of influence.  The Carmel River, in Carmel, CA, is well-known to seasonally breach, though the duration and timing of each breach is difficult to predict.  Observations of seven distinct breaches from December 2016 through January 2017 indicate that while river discharge is low, the combined effect of waves and tides is sufficient to reduce flow through the breach, allowing sediment to accumulate at the mouth and close off the river.