Dr. James Nybakken was born in Minnesota, received his Ph.D. from the University of Wisconsin at Madison, and was hired by California State College at Hayward (now California State University East Bay) in 1965. In 1966, with the formation of the MLML consortium, Jim Nybakken became the first faculty member at MLML. Jim taught at MLML for 32 years, and was Interim Director twice before retiring in 1998.

Gary McDonald: I was (and still am) fascinated by nudibranchs and wanted to do some kind of research on nudibranchs, and Dr. Nybakken was one of the few professors on the west coast who was interested in nudibranchs. In 1970, at the urging of my undergraduate invert zoology instructor (Dave Montgomery) at Cal Poly, I drove up to MLML to meet Dr. Nybakken to discuss the possibility of him being my major professor if I came to MLML as a grad student. I was delighted when he agreed, he even offered me financial support in the form of a position with the first Sea Grant which MLML had just received. One of Dr. Nybakken's projects was studying the nudibranch population in the intertidal at Asilomar State Beach, and once a month, rain or shine, during a minus tide he and a few of his students would go out to count the number of nudibranchs within a prescribed area. At the beginning of the study Rich Ajeska, Genny Anderson, Shane Anderson, & I each had a specific area to survey; after Rich, Shane & Genny graduated, Dave Shonman joined the nudibranch counters. During the early 1970s Dr. Nybakken supervised a number of students interested in nudibranchs and who completed masters theses:

Rich Ajeska, 1971, "Contributions to the biology of Melibe leonina (Gould)"

Gary McDonald, 1977, "A review of the nudibranchs of the California"

Teresa Turner, 1978, "Adaptive significance of foot forms and types of locomotion in opisthobranchs"

Part of the Sea Grant which MLML obtained in 1970 involved surveying the benthic inverts in northern Monterey Bay. We made sampling cruises on the R/V Amigo & R/V Falcon, both vessels owned by Frank Monich. At this time MLML did not have its own large research vessel, only the "barely seaworthy" R/V Orca, which was far too small for the benthic sampling required for the Sea Grant project. We used a Smith-McIntyre bottom grab to collect the benthic samples.

Among the species found were several specimens of a small aeolid nudibranch which had not been described, so Dr. Nybakken & I named it in honor of MLML (Cerberilla mosslandica).

One of the courses Dr. Nybakken taught was Marine Invertebrates. I was fortunate to be the teaching assistant for 2 or 3 of his invert classes. At least one class field trip each year was a dredging/trawling trip in Monterey Bay to find deeper water inverts. Dr. Nybakken also made many other dredging trips in Monterey Bay to collect benthic inverts.

Each year, at the end of the class, Dr. Nybakken invited the students from the invert class to an invert dinner at his home in Carmel Valley, where students celebrated finishing the class by eating clam chowder, mussels, crabs and other kinds of inverts they had studied during the semester.

In June 1975, Dave Lewis was living at La Selva State Beach. One morning he saw several people down on the beach below his house. They were collecting Pismo Clams, lots of Pismo Clams of all sizes. Dave called California Fish & Game. When DF&G arrived the people were cited and the clams were brought to MLML where Dr. Nybakken organized several students so that all of the clams could be measured, all 2,856 of them.

In January, 1975, Jim Lance of Scripps Institution of Oceanography invited Dr. Nybakken & me to accompany him on his annual trip to Nayarit, Mexico, to look for nudibranchs. We stayed in a small private home in Rincón de Guayabitos, and collected in a number of areas between Matanchén & La Cruz de Huanacaxtle. Not only did we find many species of nudibranchs we had not seen before, but many other inverts as well. This trip also allowed Dr. Nybakken, an active orchid grower, to collect a few orchids to add to his orchid collection.

In 2007, John Pearse (UCSC), Jeff Goddard (UCSB), & Terry Gosliner (Cal. Acad. Science) received a Sea Grant to replicate the nudibranch counts which Dr. Nybakken had done at Asilomar in the 1970s, as well as surveys done previously by others at Scott Creek & at Pillar Point. We met with Dr. Nybakken at Asilomar so that he could show us exactly where his counts had been done.

Mark Silberstein: Dr. Jim Nybakken was a fairly new professor when I met him at MLML in the late 1960s, but he had the presence of an old style academic. All of the professors were referred to as ‘Doctor’ then. (Not until the arrival of Greg Cailliet and Mike Foster, the Santa Barbarans, were students and professors on a first name basis). As an enthusiastic student of invertebrate zoology, Nybakken was the fellow I wanted to learn from. He tended to be a bit formal, and a little intimidating to me, but when a student brought in an unusual specimen from the field, his enthusiasm would bubble out. His deep interest in molluscs was infectious, and Gary McDonald’s account of their joint studies on opisthobranchs captures a great era in ML history. Nybakken organized deep dredging cruises in the bay and on one of the trips, on the Navy research ship DeSteiger, we dredged up some aplacophorans – an odd class of molluscs that are rarely found in shallow water. I remember his excitement, marveling at these strange worm-like creatures and puzzling over their morphology and habits and we shared a laugh at their strangeness.

When I spoke to students from other institutions and schools, Nybakken was well known, because the textbooks he wrote were widely used in introductory marine science classes.

Jim pioneered the quantitative study of the invertebrates of Elkhorn Slough in the early 1970s and along with Greg Cailliet and Bill Broenkow and their students, published the benchmark work on slough biota and hydrology. Nybakken was involved with The Nature Conservancy in their early work in the slough that led to the first conservation transactions and land protection there.

One of the enduring images is a photo of Jim, as a student, on the legendary ship Te Vega – Hopkins Marine Station’s research vessel in the 1960’s. He is on deck in the tropical sun, beaming up at the camera. The Te Vega made 19 cruises to tropical seas from 1963 – 1968 and many of our venerated elder statesmen, and legends of Marine Biology, participated: Jim Nybakken, John Pearse, Vicki Pearse, Michael Ghieslen, Richard Mariscal, Margaret Bradbury, Richard Barber, Don Abbot, Rolf Bolin, Mary Silver, Vida Kenk, Gene Haderlie, Bob Lea, Richard Parrish, Jim Childress, Bruce Robison, Alan Baldridge, Joel Hedgpeth and a host of other luminaries. Nybakken returned as the Chief Scientist on Te Vega’s cruise to the Sea of Cortez and the mainland of Mexico in 1967.

Reading through his notes give a sense of his enthusiasm and excitement and his bent toward natural history as he explored what must surely have been a tremendously exotic environment for a farm boy from Minnesota. He made many scientific collections during these cruises and brought back valuable specimens. 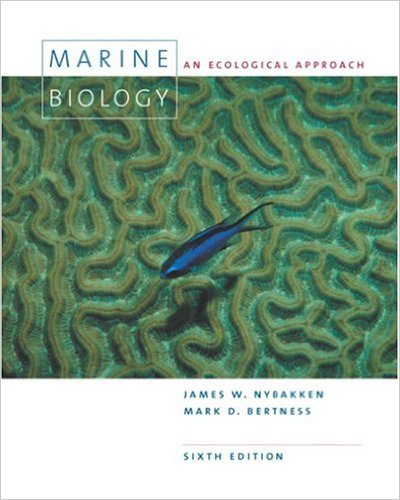 The MLML museum collection was a deep interest and a tribute to the breadth of his zoological interests. This remains an extraordinary and valuable research asset. Jim’s legacy lives on in the students he mentored at Moss Landing and in the uncountable numbers of students inspired by his books. His is an indelible part of MLML history.

Jim's ashes were scattered at sea from the research vessel John Martin over Jim's favorite sampling site:  "the 60 meter station".  A bottle of Chardonnay was opened and poured over the side to christen the spot, and a Norwegian flag flew from the ship's mast.

Dr. Nybakken served as the thesis advisor for 61 MLML students, his first student to graduate was Marilyn Vassallo in 1968 (CSUH) and his last student graduated in 2000, Kristen Kaplan (CSUMB).

Bette Nybakken has set up a Nybakken student scholarship, so we encourage you to help support future students by contributing to this scholarship fund.