During the Austral Summer of 2013, the R/V Point Sur sailed to Antarctica and spent two months supporting operations while based at Palmer Research Station. Participating in this historic voyage was a privilege and I feel I can speak for the entire crew in expressing the pride of getting to see her, the Sur, in one of the most majestic places on earth.

Now you have to cross the infamous Drake Passage, considered one of the most dangerous patches of water in the world to get to Palmer Station, Antarctica.

Here are some Antarctica flashbacks from a cook’s perspective:

Though I cannot explain much about the krill density study that was conducted on the vessel, I can say that the soon-to-be-famous Creole krill cake was mighty tasty!

We throw the term ice water around so easily on land. When you spend day after day looking at ice and water combined with ever-changing light, the sheer beauty of it all eludes the camera.

Taking a break in the middle of your work day to hang out near a penguin colony is so much fun it makes it easy to tolerate the smell.

I will probably always say that a minke whale is the most gorgeous and graceful creature I have ever witnessed in motion.

I will never forget what a whale’s breathe smells like. Thank you to Ari Friedlaender and the whole team for my boat ride and a whale-watching trip like no other! It was my first, and hopefully not my last, Cetacean Vacation!

The crew of the Point Sur made sure to leave a mark and a bit of Moss Landing at Palmer Station.

There are so many people who were involved with the planning, preparation and execution of this journey. The support of the MLML community was felt and appreciated by the whole crew and never let it be said that MLML does not throw a great welcome home party!

The logistics were daunting at times. Those of you who know Stewart Lamerdin know that he really needed this Chilean beer as he prepared to send the Sur to cross the Drake. Thank you, Stewart, for your tireless effort which made this whole journey a reality.

Thank you to Moss Landing Marine Laboratories for giving me the opportunity to play in your world. I was able to pursue my own passion and learn so much from the people around me, each and every day. This made my almost six years with you a truly rewarding and rich experience. Happy Anniversary.

Thank you to the crew (and relief crew!) I was privileged to sail with and for our safe return.

Closing with one more picture and the names that belong to those beaming faces.

Crew of the R/V Point Sur at Palmer Station: 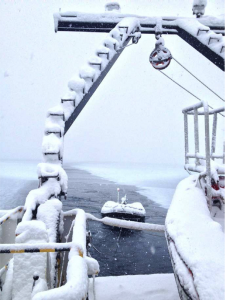 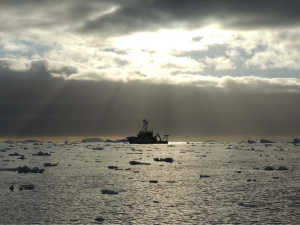