Aaron King is a 1989 Ichthyology lab graduate of MLML, and is currently a retired Fed living in the Oakland Hills.  Aaron was one of the original employees of the Monterey Bay National Marine Sanctuary, where he worked on resource management, research, and Sanctuary outreach back in the early days of the internet.

One of the great MLML traditions is the way housing can turn over from one student to the next until no one can remember who first rented it.  Such housing is spread throughout the Moss Landing / Castroville / Prunedale area.  One house, that is both prominent in the Moss Landing community, and iconic in its reflection of this tradition, is the Big Blue House.

Everyone now knows the Big Blue House as the "Captain's Inn," a beautifully refurbished Bed-and-Breakfast created by Melanie Mayer and Yohn Gideon.  However, when I first saw it for rent in the Fall of 1985, it was just a semi-dilapidated house -- BUT, it was within walking distance to the Labs.  I had already spent one semester at MLML, and was returning from a summer in the Aleutian Islands working with Korean and American fishermen as a business liaison officer.  The nice thing about such work is that it left me with a cool $7,000 in my bank account to begin the new school year.

Just before the start of the Fall 1985 semester, I hooked up with two other MLML'ers (Bill Hayden and Tom Lambert) who were also looking for housing.  We called the phone number on the "For Rent" sign and talked with the new owner of the Blue House, a Naval Officer stationed at the Naval Postgraduate School.  After some back-and-forth, he finally rented it to me (because of my big bank account) for a year's lease at $1200 per month.  I remember I had to agree to a VERY LONG and COMPLICATED contract.  The Naval Officer was being transferred to Hawaii, and said he did not want to be concerned with the house for at least a year.  So, he said we should just deal with any maintenance issues, and subtract the cost from the rent.

Bill, Tom, and I turned it into a five bedroom + 1.25 bath dormitory by transforming the dining room and a large closet into bedrooms.  The garage (which Yohn and Melanie made into a 2-story house) was used as a gym ("Jim's Gym" - after Jim Brennan, who set it up with a mixture of assorted workout equipment donated from other MLML'ers).  The building in the back, that is now B-n-B housing, was a much smaller structure, and had a young couple living in it.  When we asked the Post-Mistress what our address was, she told us, "Big Blue House, Moss Landing, CA   95039."

Over the course of many years, a number of students came and went, and the Big Blue House became the closest thing to a "Frat House" that MLML has ever seen.  It wasn't uncommon to wake up in the morning with an empty keg in the middle of the living room, and several students crashed out on the couches and floor around it (or elsewhere!).  Since we had to walk past the post office on our way to the labs, we had our utilities paid by a small stipend we received from MLML for delivering the mail.  And, speaking of utilities, I don't think the pilot light for gas heat was ever turned on there.  Why?  Because we didn't want to pay for the gas!  Instead, we heated the house in the winter by using the three built-in fireplaces.  For firewood, we would collect old wooden pallets from the fish houses on the island, and break them up in the driveway (it's amazing the place never burnt down).  For several years, we had an old Greggor skiff pulled up into the pickleweed in the back.  It had a small electric outboard on it, and for fun, we would sometimes motor over to the labs for class.  I don't think the boat was ever registered.

Immediately after the 1989 Loma Prieta Earthquake, the house was turned into a temporary base of operations for MLML.  To this day, I can still see Dr. John Martin and several other faculty members gathered around a folding table in the middle of the living room, while Sandy Yarbrough and Gail Johnston sat talking on the phone, working at temporary desks at the far end of the room.

There are a number of stories I could tell you about the Big Blue House.  Most of them, however, involve folks who are still alive and in positions of respect, so I think it best to keep those stories verbal (for example, you should ask me to tell you the story entitled:  "Me, Andrew DeVogelaere, the Sheriffs' deputies, the Big Blue House, and the Naked Man!").

One of my favorite stories I CAN tell you is about when Bill Hayden woke up one morning to find a bulldozer in the back ploughing up the pickleweed.  He went up to the dozer operator and asked, "What the hell are you doing?"  And, if you knew Bill Hayden, "hell" was pretty strong language.  Turns out, the Harbor District had simply decided to enlarge their equipment storage facility, and was doing so by bulldozing, "that useless slough area back there."  No permits.  No public hearings.  Nothing!

One final story is one that Melanie Mayer told me.....  Around 2001, when Melanie and Yohn were buying the house, they were meeting with their lawyer who was going over some of the sale paperwork with them.  Their lawyer said there was a clause in the lease (remember that long complicated contract I mentioned earlier?) that made the contract non-ending unless one side or the other gave written notice.  It also said that the contract gave me (Aaron King) the option for an additional year once notice had been given.  So, the lawyer told Melanie and Yohn that there may be a problem if this "Aaron King person" wanted to exercise that option.  Melanie said she and Yohn burst out laughing, and Melanie told the lawyer to, "leave the dealing with Aaron King to me!"

If you want to read more about the history of the blue house in Moss Landing go to this link: http://www.captainsinn.com/about-us/our-historic-location.html 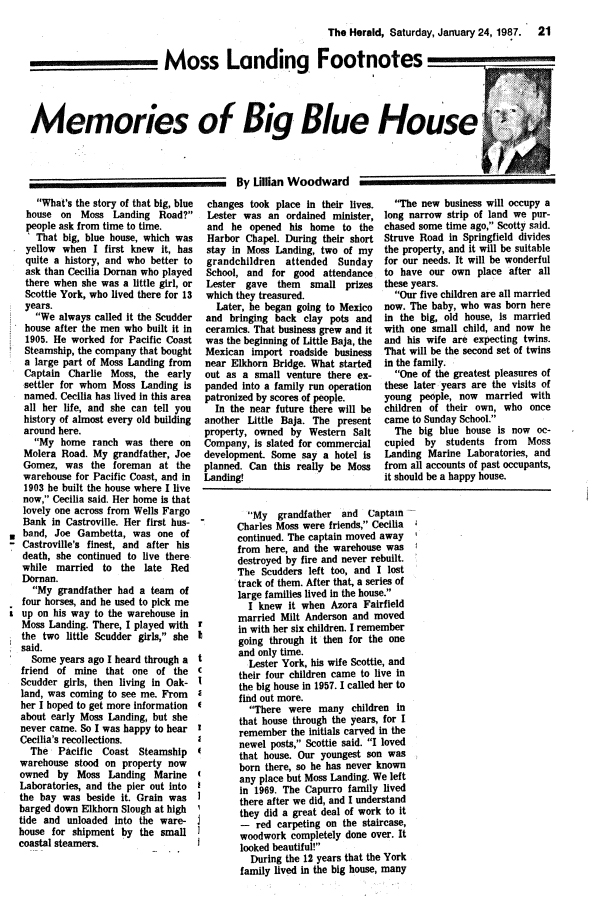