Angela Zepp, originally from the landlocked state of Missouri, developed her love for the ocean at a young age but rarely had the opportunity to visit. To pursue her dreams, she moved to California to attended Humboldt State University and developed a love for diving. Fast forward to 2017, where she is completing her Masters Degree at Moss Landing Marine Lab! 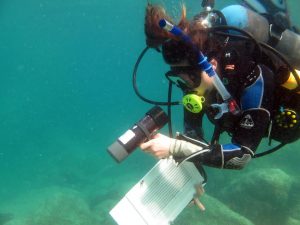 Tripping on Acid for 2 years: Factors driving demographic and temporal variability in pH of the acid weed, Desmarestia herbacea

Demographic studies allow for a better understanding of how populations change over time and establish a baseline to examine how biotic and abiotic factors influence populations.  The annual seaweed, Desmarestia herbacea, or the acid weed, accumulates sulfuric acid (H2SO4) within cell vacuoles, likely as a chemical defense mechanism. Whether pH varies ontogenetically is poorly understood. A D. herbacea population in the Stillwater Cove, central California kelp bed was assessed for two years to measure how internal pH varied relative to demographics, season, grazing pressure, and environmental variability. The timing of spring recruitment and fall senescence varied interannually. Sporophyte recruitment occurred during upwelling season in mid-March and thalli reached maximum length during the Oceanic season (July-October) then senesced during the Davidson Current season (November-February). Mean thallus length was inversely related to density with smaller plants present in 2015 when densities were higher.  In contrast in 2016, individuals were significantly larger and density was lower and the senescence period extended into January 2017. The ontogenetic shift in intracellular pH of D. herbacea was seasonal in both years and may be driven by ocean temperature. In 2016, the pH was highest during the recruitment period (1.38 ± 0.14), followed by a decline in pH during the growth period (0.60 ± 0.01), followed by an elevation during the senescence period (0.65 ± 0.02). Benthic invertebrate grazers had a strong, significant and negative effect on the early recruitment of D. herbacea both in permanent plots and an herbivore exclusion experiment. Plots with higher herbivore abundance had significantly lower recruitment. Higher densities of Desmarestia, and smaller plants in 2015 may have been correlated with higher temperatures in 2015 associated with El Niño.  These findings suggest that despite inter-annual variability in demographic patterns, strong, seasonal shifts in intracellular pH may reflect ontogenetic shifts in chemical defense to protect vulnerable growth phases of life history.