I was aboard from her first cruises out of Moss Landing in 1983, to her last cruises from MLML in 2014. Maybe that is why I was the scientist asked to speak at her farewell, and maybe this is also why I was so reluctant. She was in near perfect condition and not just from the looks of her. Recently rebuilt engines, engine controls, navigation, steering, electronics on the bridge, new crane on the bow, new trawl winch, paint on the decks, inside and out, new wastewater management system, air compressors, interior LED lighting, etc… There was little if anything that had not been recently refurbished. Stem to stern and keel to mast, she was fully equipped and had a full complement of tools in the main lab, electronics lab, boatswain locker and engine room and a full set of rigging gear for almost any over-the-side operation, safety gear, firefighting equipment, communications equipment and hundred of thousands of dollars worth of scientific equipment and instrumentation. 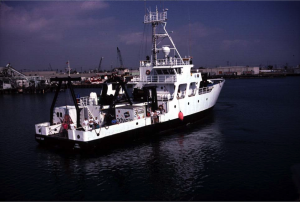 She had just completed two successful trips to the Arctic and one to the Antarctic and she was still among the most economical vessels to operate in the US fleet of research vessels for her size. Yet, MLML had received direction from the National Science Foundation to dispose of her.

I had served on the UNOLS Council (University NationalOceanographic Laboratory System is the non-governmental body that advises NSF regarding ship scheduling, fleet improvement and other matters related to the nation’s fleet of research vessels) for two terms representing an operating institution and was an active user of the MLML/NSF Research Vessel Point Sur. I had just completed two cruises on the study of methyl mercury in marine fog, and three cruises as part of an NSF sponsored Chief Scientist Training Program designed to encourage young investigators to use large marine facilities such as the R/V Point Sur. The UNOLS Council had recommended to NSF that she be retained. In spite of all of this, the NSF was experiencing heavy internal pressure, pressure from OMB, a loss of facility funding due to an over commitment to cabled observatories and needed to get inventory off of their books. MLML was about to loose her flagship due to politics and failures in leadership, both at the local and national level. I was selected to give an overview of the scientific achievements that the R/V Point Sur had supported, but my blood was boiling and my heart had sunk. Yet this was no attitude in which to say goodbye, but what could I say?

My class had rigged flags from the bow, over the top of the mast and to the stern A-frame. There was food and chairs, tables and drinks. Former crew, scientists and dignitaries had assembled. Camera crews from KSBW and KION. Faculty from MBARI, MLML, NPS took their place and I was beginning to sweat about what I would do.

We heard from several speakers including Jim Harvey, Mike Prince, Stewart Lamerdin, Chris Scholin, Steve Etchemendy and then it was my turn.

“Thank you Mike, Stewart, Chris and Steve for this window into the past and the roots that this vessel has grown. These flags represent the affiliation and the heritage of our students, staff, faculty and colleagues over the years, many of whom have sailed on Pt. Sur. Not all flags would fit, the little ship is just not long enough.

But she is a treasure.

Before I get started, or loose my grip, I wanted to thank Dolly Dieter, Linda Goad, Rose Dufour, Jim Holik, Bob Houtman, Tim Schnoor , Jon Alberts, Annette DeSilva, and many others at NSF, ONR and UNOLS for giving us such a ride, and trusting us with a public asset that has delivered such a huge public benefit. I think that, for this, we can all be grateful.

Eleanor Roosevelt said many wise things. One was one my wife repeats:  Do something that scares you every day. Well, I have never retired a ship, and this may be one of those days.

I have spent some time on the Sur.   Cumulatively, it has been years.

And, I gotta say that without a crew this ship is just a hulk of metal and paint.

With every crew the ship gets better

Just because you are losing your jobs and your workplace, this is no reason to be sullen.

We did not make all this grub and grog,

Nor dress this ship in fancy flare

To hark back and pine away

On those who sit to reminisce

Just suck it up and take a piss,

Then get back down to business

This here event will require

That you all rise up and inspire

Give your arses some respect

And abandon ties to the internet

Now stand up from your reclined poise

And be prepared to make a noise

For this is no time for wallerin

Now is the time that we be hollerin

For the rest of this incantation

The crowd rose, a bit perplexed, but all stood up

I then explained that we were going to sing a Shanty in a call-and-response format and I explained how the Shanty would work. I created cue-cards for their singing parts and had briefed my class ahead of time.

Response:    Though the seas are rising

I had positioned my student Alex, on the bridge and when the Shanty was over, Alex let off two short blasts on the ship’s horn, and everybody broke for drinks on the dock.

We did find a good home for the R/V Point Sur. Colleagues from the University of Southern Mississippi and the Louisiana Marine Consortium spent a couple of weeks loading and provisioning her for her second trip through the canal, back to the Gulf of Mexico, where she would be operated in support of science related to the Deep-Water Horizon blowout. The crew and scientists could not believe her condition and her provisions.

As she sailed from Moss Landing for the last time, she was flying two signal flags: Bravo and Zulu. Flown together these flags indicate “Job well done”.