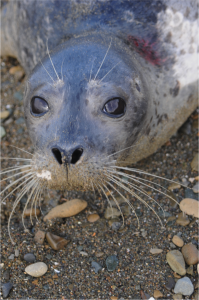 My MLML tenure started on probation and in transition. I initially came to the Lab to work with the Bernd Wursig on marine mammals. To be blunt, however, my undergraduate GPA sucked. My GRE scores were not much better. In University terms, that put me on immediate academic probation. Great start. Bernd was willing to give me a chance, but I had to prove my intellectual capability before he accepted me into the fold. I got lucky, did well, and Bernd rewarded me with a place in his lab. Then he promptly left for a position in Galveston, Texas. I stayed – Brooklyn boys do not belong in Texas. Jim Harvey arrived to take Bernd’s place. Jim, it turned out, would also make me prove myself before accepting me into his lab, but in a significantly different, more physical way.

When Jim arrived at / returned to MLML as a newly minted professor, he brought his passion for harbor seal research along for the ride. After all, he was about to get numerous indentured servants willing to carry out his every whim and desire. Risk free, as I would soon discover. Jim and I discussed project ideas and came up with one that involved studying the movements and food habits of harbor seals in Monterey Bay. It would involve catching, tagging, and radio tracking numerous seals around the Bay. National Geographic channel stuff – “count me in” I thought. Soon thereafter, I was in the quad discussing project plans with other students, when a newbie by the name of Steve Trumble insinuated himself into the discussion . . .

"Oh yeah? Let’s dance!” – Though in all honesty, those were not the words I used.

First rule of the Fight Club that is graduate school – don’t tell a student she/he can’t do something. Colorful metaphors were thrown, stare-downs and posturing ensued. We took our fight to Harvey, who admitted he screwed up and gave us both the same idea for a thesis project. It must have been early onset Alzheimer’s. His solution: “You guys go figure it out”. It was the beginning of a long-standing professional and personal friendship. Steve would focus on seals along the open coast and I would wrestle with those residing in Elkhorn Slough. Literally, wrestle.

Before radio tracking a seal, you must first catch a seal. This involves deploying a large glorified beach seine in waters adjacent to a haul-out site using two fast and agile Boston Whalers. The Lead Boat deploys the net in an arc in front of the resting seals while the second “capture” boat retrieves the leading end of the net and brings it ashore. These activities would disturb the resting seals (don’t worry law enforcement types – we had a permit for that) who would enter the water to escape and – if all went well – find themselves ensnared in our nets.

[An aside: "Vlad" in the picture above is Dr. Valdimir Burkanov, who is Russian and now works at the NMFS Marine Mammal Lab in Seattle]

Our training and initiation took place in South San Francisco Bay. If memory serves, most of those who would

become the usual suspects in seal tagging operations were there: Steve Trumble, Mike Torok, Meg Lamont, John Mason, Matt Byrd, Tom Norris, Sal Cerchio and myself. Other mainstays like Tomo Eguchi, Rob and Kim Suryan, Tony Orr, Doreen Moser, and Michelle Lander would join up later to great effect. Jim issued orders like a drill sergeant sending troops to their demise. He would drive the Lead Boat himself. Steve, being an excellent boat driver, would drive the Capture Boat. I drew the short straw – if members of the second boat could not reach the leading end of the net, it was my responsibility to recover it. Sounded simple enough. It was not. The immediate stampede of seals that occurred as we approached the haul-out site forced us to increase our speed in order to deploy the net in time. As I crouched on the bow, it became immediately clear to Steve and I that the net would come nowhere near the students in the Capture Boat and we were at risk of fouling the propeller on the netting. By way of solution, Steve made an abrupt, sharp, high-speed turn. My body dutifully obeyed the laws of physics – I was catapulted out of the boat, into the water, and onto the net. I was told it was very graceful if not intentional. I grabbed and swam, or at least I tried to against the tide, towing a net that I was sure held over 1,000 seals. Lots of yelling to hurry ensued from those who were still safe and dry aboard the boats as escaping seals whizzed past me and between my legs (thankfully with their mouths closed). My less-than-professional responses encouraged some of my compatriots to join me in my water-bound tug-of-war, while others like Jim and Steve sat warm and dry suppressing their laughter and expressing their derision. In the hundreds of subsequent expeditions, our roles remained unchanged and the leading end of the net never made it into the retrieval boat. 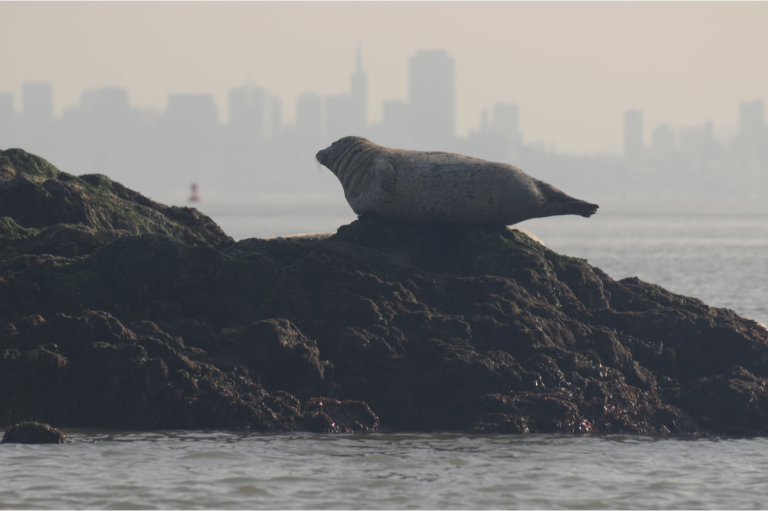 Once ashore, our haul was far less than I had anticipated. Two individuals out of at least 250 seals. I will let you do the math. Jim pointed at me and then at the 250 lb male at my feet. “Dion – get on him. Hold him still”. Wha? There were plenty of others to pick on. I mean from. John Mason was a head taller than I and twice as broad. Steve was as strong as semi-truck on ‘roids and as stubborn as Donald Trump. So, sure. There are sharp teeth involved, but sure. It was like sitting on a greased up squirming sausage of fat and muscle. I got on the animal too slow and the seal immediately rolled onto its back while between my legs. At that point, the seal decided it would be prudent to bite me in the face. He lunged. I dodged – backwards and ass-first into the mud to the amusement of all. Seal included – I recall it looking quite self-satisfied. “Don’t let him do that” was Jim’s simple and sage advice. “Get back on but be quick about it this time”. That is when I started to consider switching to invertebrates. Less teeth and less attitude. And Professor Nybakken wasn’t this sadistic.

After securing the animal, the others dove in to do various and sundry things to our captive. Blood was drawn. Tissues sampled. Flipper tags secured. While all this was going on, I had to restrain the head with both hands and constrain the body between my legs. Now, as you well know, there are important appendages down there to be concerned about (Steve can attest to that in a later blog) and that is a fabulous incentive when you are stuck in such a position for 45 minutes. That is how long it took the epoxy Jim was using to secure a radio transmitter on the seal’s head to set. Slough mud may look soft and slimy. After lengthy exposure, it is not. Anyone who has wrestled seals under such conditions can tell you it is a great exfoliator. It rubs off callouses and fingerprints (I could have become a career criminal), not to mention the damage it does in unmentionable areas after hours of chaffing. And one last tid-bit regarding this first foray into seal tagging: once the epoxy had dried, I discovered that our esteemed mentor had glued my hands to the seal. They had to cut me off. I had hairy palms for days. Insert your own tawdry comments here . . .

The seals were ultimately released and so began several years of such activity. The result of these shared experiences of enjoyment and misery has created bonds between us all that remain to this day. As we packed up to head home, Jim suggested we stop for pizza. He, however, could not join us as he was meeting his wife in San Francisco. Being poor grad students, Jim offered up some cash by way of support. A 20-spot to be precise, but I grabbed the Benjamin that was sticking out of his wallet instead. Compensation for emotional duress. We kept the change. I figure we still owe Jim about $50, but considering the experiences and opportunities he provided us, we most likely owe him a whole lot more.