Yipi rumbled down the narrow, craggy road at a speed that seemed unsustainable. “One More Cup of Coffee” by Dylan played loudly on the Jeep’s stereo. Sunset was looming and setting up camp before nightfall was important…but maybe not this important. MLML ichthyology lab students, Joe Bizzarro and Wade Smith, were rattling in their seats. This was the type of ride where the vehicle occupants seemed more like bobblehead dolls than passengers – a ride that causes the fillings in your teeth to vibrate…because the road was carved out of the side of a dormant volcano, with jagged rocks protruding through a thin layer of sediment. The road conditions demanded a crawling pace that Joe felt they couldn’t afford. And even though Joe and Wade were driving “fast,” it would still take about an hour to cover the twenty miles to camp. Wade seemed a bit tense in the passenger seat, so Joe – seeking to defuse the situation and typically delusional - postulated “What’s the worst thing that could happen, we blow a tire?” Um, no…not hardly. There are much worse things that could happen. After all, this is Baja.

An international collaborative shark and ray fishery project. Ah. Say it out loud - it seems rather majestic, no? Well, it did to Joe, Wade, and Erin Jones when Greg Cailliet proposed it as a two-year study from which they would (supposedly) generate thesis projects. Outgoing M.S. student and lab Mom, Julie Neer, would serve the role of Charlie to the grad student Angels, managing the project from the home base while the kids collected data in the field. The project was funded primarily by the Packard Foundation. Its objectives were ambitious - to locate all the artisanal fisheries camps in the Gulf of California, determine which camps targeted elasmobranchs, and document fisheries and biological information from landings at those camps. The Gulf had supported an intensive, but poorly documented shark fishery for years; however, anecdotal evidence suggested the serial depletion of many large, predatory sharks and a shift to smaller, coastal sharks and rays. Greg was partnering with highly respected elasmobranch researchers at Mote Marine Labs, the University Autonoma de Baja California Sur, and the Instituto Nacional de la Pesca, Mexico’s version of NMFS. What an opportunity! (By the way, Yipi was Greg Cailliet’s pet name for his Jeep Cherokee, which, when we left off with this story, was in the process of being destroyed).

Suddenly, things went dark for Joe and Wade. Literally. Dust was quickly filling the interior of the vehicle although the windows remained closed. How odd. Then the problem became readily apparent. All the shaking and banging from the road caused the lock mechanism to tear off the hatch back of the car. The lock remained fixed, but the hatch back, with a gaping hole where the lock used to be, pointed skyward. Even worse, the car was empty. All the supplies were gone. They could be seen dotting the road behind the car like a trail of breadcrumbs stretching into the distance. At the end of this trail was a small, white bus…stopping at each lost item to claim a road prize. Joe and Wade watched and waited…and when the bus pulled up, requested their stuff back. After a brief negotiation and some minor extortion, the supplies were reloaded into the vehicle and the back lashed down with rope. Getting to camp before dark wasn’t going to happen, and a more cautious approach seemed advisable…but when Joe turned the ignition, the oil light came on - and indicated that the car had none. A decision was made to pull the crippled vehicle into a roadside arroyo, set up a makeshift camp, and regroup in the morning.

The project was truly spectacular in many ways. The Gulf of California is a remarkable study site for an elasmobranch biologist. Because of the oceanography of the region and its physical location at a transition between biogeographic provinces, it is home to a great diversity of sharks and rays. In addition, the survey years, 1998 and 1999, reflected El Niño and La Niña conditions, further accentuating the regional diversity. The Gulf serves as a nursery area for many migratory sharks and rays, and species composition, therefore, is highly dynamic. Fieldwork was for about 2-4 weeks/each season to capture this dynamism. Most of the elasmobranch species in the Gulf of California were not common to California waters,  therefore, a book-borne knowledge of the local fauna, and a working understanding of Spanish, were project requisites. After sharpening up on these skills, Joe, Wade, and Erin were deployed to Baja California (Norte). One group (each) was responsible for surveying the other states that border on the Gulf (Baja California Sur, Sonora, Sinaloa). Erin did not participate in the trip being described, but was an integral part of the team. Not only as a field biologist, but because she is a fluent Spanish-speaker and charming and attractive gringa. She referred to herself as “Margarita” and ran wonderful interference with love-struck fishermen to facilitate our sampling efforts.

While sleeping off the events of the day in Campo Arroyo, Joe and Wade were awakened by the high beams and rumble of an approaching vehicle. It was, inexplicably, a red Fiat, a car that

should never be able to navigate the volcanic road at any speed. The driver was a mustachioed Mexican man, and Modelo cans were strewn about the dashboard and interior of the vehicle. He was very drunk – probably blacked out. He staggered out of the vehicle and announced his intention, “Tienen aqua?” he asked? “Si…tiene aceite?,” Joe replied.” “Si.” Well, I’ll be – rather than a scorpion in your shoe, a true gift in the night seemed to present itself. A large bottle of water was produced and given to the borracho. He popped his hood to reveal a steaming radiator with no cap, and, while staggering about, managed to pour about half of the bottle into it. Then he got back in the car, fired it up, and started to back out of the arroyo. “Whoa…whoa? …what about the oil?!” The man replied….”I have oil. I only needed water.” Ack! Great googly moogly, you gotta be kidding me?! Buckled by a sour mixture of chagrin and frustration Wade sank to the dusty ground. Still no oil and we would likely need that water when the blazing sun rose. “Don’t worry, Wade.” Joe said. “He’s going to die on that road tonight. We’ll see that Fiat at the bottom of a canyon tomorrow morning when we walk back to town (Puertocitos) to look for help.” Wade was relieved - but once again…that’s not how it would play out.

When the sun came up, Wade and Joe left the crippled Jeep that Greg had loaned them and in an unadvisable act of desperation, began the 15 mile walk back to Puertocitos. Not much was said, but the roadside and chasms were eagerly scanned for a crashed Fiat. Nothing was discovered. Then, about 2 or 3 miles into the walk, a car approached from the south. And, as Wade and Joe stared incredulously, they were coated in dust by a passing mustachioed Mexican man in the red Fiat. And he was driving too fast, besides…and somehow making it all work. No justice (this is a common theme in Baja). Just then, however, two fishermen who were driving north in a truck with a panga strapped to the top stopped to urinate on the side of the road - and got to talking with us. They agreed to tow Yipi back to Puertocitos. The drive took about 4 hours and was rife with equal doses of danger and ridicularum, as was the rest of the two year survey, but that’s a story for another day.

It was quickly determined that the descriptive fishery information that we were collecting as research assistants on this project would not be sufficient for MLML theses. We expanded our work (and misadventures) onto the Pacific coast of Baja California Sur to develop directed studies on the biology and ecology of rays from well-established fisheries in the Magdalena Bay Lagoon Complex. Though the international collaborative project that initially brought us to Baja was underfunded and marked by an overly optimistic timeline, a final report to Packard was eventually completed, translated to Spanish, and disseminated to interested scientists and fishery managers in Mexico and the U.S. Four manuscripts were published that, for the first time, documented the characteristics and status of the artisanal shark fishery in the Gulf of California. Basic information such as species-specific catch data were largely unavailable prior to the release of these survey results. In all, 147 fishing camps were located, of which 86% targeted elasmobranchs during at least one season. Large sharks were rare in landings compared with small, coastal sharks and rays, and populations of several species appear badly overfished, including tiger, bull, and dusky sharks. The results of this study served as the basis for establishing the first national shark management plan in Mexico, and as foundational material for several subsequent publications on elasmobranchs and their fisheries in the Gulf of California. Sure, Greg’s Jeep was destroyed but we pulled it off in the end – as is typical of all the Baja projects that have been conducted through Greg’s ichthyology lab. Much like he is fond of saying “I don’t do salmon,” Greg often says “I don’t work in Baja” (right up until he does). It’s easy to understand his aversion to Baja as a study site. It was made for the Mike Foster types. Gregor is too Type A to deal with the lassitude, inefficiency, and unpredictability of desert life. You never know, for instance, when a guy in a Fiat is going to trade you nothing in exchange for your water. 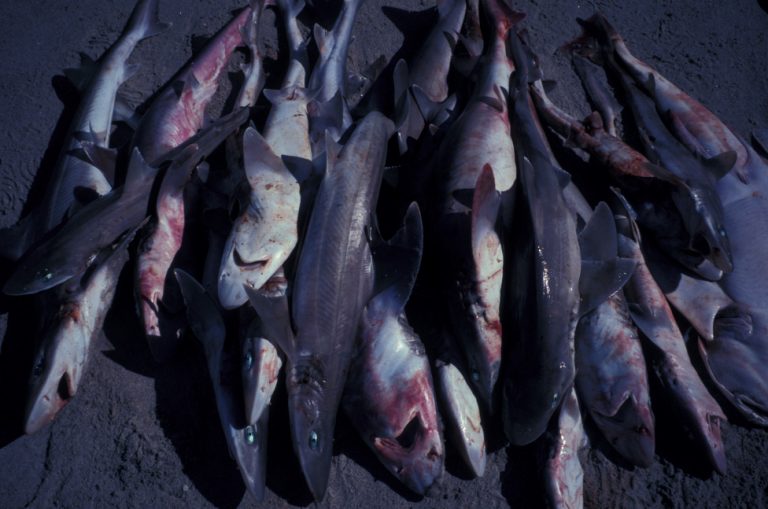