It was a typical cold and foggy spring morning as Jim and I loaded the fishing gear on the M/V Orca, MLML's smallish open deck work boat. The year was 1978 and Jim was working on his Master’s thesis concerning the life history of blue sharks in Monterey Bay. Always wanting to spend more time out on the bay, I eagerly agreed to help him catch a few specimens for his research.

Happily for my typically sea queasy stomach, the tide was near slack and the rollers flowing into Moss Landing’s harbor were gentle and widely spaced. With little breeze, the fog shrouded us as we chugged offshore in remarkably flat calm seas. After a couple hours we found ourselves over brilliant azure blue pelagic waters. Along most coasts, pelagic waters and the critters that abide there can only be reached after traveling tens of miles offshore. In Monterey Bay, which is incised by a mile-plus deep submarine canyon, these deep waters are accessible only a few miles offshore.

Jim figured we had gone far enough offshore to attract some blues and had me start chumming, periodically tossing fish carcasses, blood, and entrails into the water. As we idled along chumming, the fog started to clear and soon we could see Santa Cruz some miles to the north and make out Pacific Grove far to the south. It was turning out to be an absolutely gorgeous day on the bay, the kind of day that reminded both of us why we felt so blessed being graduate students at the lab. 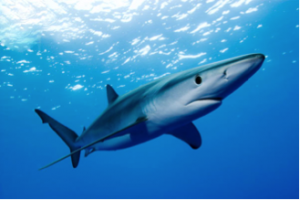 After a time, our chumming efforts were having the desired effect. A few blue sharks were lazily swimming around our boat and in the flat calm seas we could see the dorsal and caudal fins of several more blues slowly making their way up our chum line. We watched in a state of awe as more and more of these slender blue-backed man-eating sharks peered up at us with their large coal-black eyes as they gracefully knifed their sinewy bodies through the

water with lazy strokes of their powerful upswept tails[1]. With the bright sun overhead we could easily see into the crystal clear pelagic waters and discern at least a couple dozen blue sharks crowded around and under our little Orca, enjoying the fruits of our chumming.

[1] Blues are known to eat just about anything they can find in the upper reaches of the pelagic waters where they roam, including survivors and not from ship and plane wrecks.

Having fully achieved our first aim, attracting a bunch of blue sharks, we now moved to phase two, getting several of these man-eaters out of the water and into our boat[2].   Blue sharks, like most fish, are not the brightest crayons in Mother Nature’s coloring kit. To catch a shark all we had to do was reach over the side of the boat and dip a sardine skewered with a large hook into the water; almost immediately a shark would inhale the sardine. As one of us pulled hard on the thin steel cable attached to the hook, the other gaffed the shark and together we swung the shark up and over the side and into the open deck of the Orca. Once on board the sharks would powerfully thrash around trying to sink our boat or their teeth into anything close by until one of us was able to reason with it, typically by employing a spiked baseball bat.

With so many sharks around the boat we were having quite a time hooking and landing one shark after another. Pretty soon sharks were lying all over the Orca’s small deck and we were approaching the upper limit of what Jim would be able to process upon our return.   Since his research question called for a range of ages, which we assumed would correlate well with the size of the sharks, we started being more selective in our hooking attempts, particularly trying to entice the biggest shark in this sedate feeding frenzy to grab one of our baited hooks. Each time this big gal (3+ meters and no claspers) swam under the boat we tried to put the sardine directly in her predicted path on the other side and each time a little shark would shoot out from underneath the boat and snarf the hook. With the limited open deck space on the Orca now littered with flopping or dead sharks, and very slippery from all the blood, we decide to stop catching.

For an oft-seasick marine biologist, it was near nirvana hanging out in the calm, clear, sparkling waters of the bay under a warm sun and being surrounded by dozens of man-eating sharks. The long and slender blue shark is elegant and graceful in the water and quite distinctive with its long pectoral fins, narrow caudal peduncle, and tall falcate caudal fin. After idly watching many blues rub up against the side of the boat I started reaching over the side and touching their silky smooth backs and occasionally briefly holding onto their dorsal or caudal fins as they cruised by. Since the sharks did not react to my initial overtures I got a little bolder and began lightly grabbing and pulling on their dorsal fins and sometimes partially lifting up the smallest sharks. I soon found myself lightly sliding my hands down the back of a shark and briefly closing them around the caudal peduncle and giving a slight tug that disrupted the shark’s forward motion. Each time the shark would spasm its body and rapidly shoot forward away from the boat. Jim was watching with mild interest and we both were amused by this new sport.

For reasons I cannot explain, I suddenly decided to see what would happen if I firmly latched onto the caudal peduncle and tried to drag a shark into the boat. As the next shark cruised by I slid my hands down his back, tightly gripped them around his caudal peduncle, and gave a mighty heave. Much to my surprise and delight I actually lifted much of the shark out of the water. The shark was equally surprised, but not at all delighted. She started threshing her powerful body back and forth in a frantic effort to swim away. With considerable difficulty I continued to hold on as with each powerful sinuous movement of her body I was being thrown wildly side to side. For a couple of moments Jim just sat there mesmerized by what he was seeing and then he burst into hysterical laughter watching me being beat to a pulp. Finally, I yelled at him to help me and together we pulled the shark free of the water, although the shark was now tossing both of us back and forth. We pulled and pulled and almost got the shark in the boat, but her long pectoral fins caught on the gunwale railing and we couldn’t seem to dislodge them. Finally, we coordinated a huge heave ho and her pectoral fins popped free as did our feet on the slippery deck. We land on our backs on the deck, among all the other sharks and after flying through the air the shark we just captured by hand landed across our legs. And boy was she upset! We quickly scrambled to our feet and jumped up on the narrow gunwale railing as our latest acquisition proceeded to thrash and gnash and flop and bite at us. Rapidly moving all over the deck, this 2-meter long female succeeded in stirring up several of the other sharks, which apparently had been faking their death.

Soon, led by their healthy and very angry leader, we had a whole platoon of sharks gnashing their teeth and wiggling and thrashing their bodies around on the small deck below us. When after several minutes this mosh pit was still vigorously sloshing around and slamming their tails and jaws into our little boat, I could see Jim looking over at me and calculating ways to somehow slip the knucklehead he brought along into the middle of this melee. I was thinking if I ended up in this mosh there was a pretty low probability the sharks would reach up and pass me around to safety. Fortunately for me, our new arrival finally began calming down and the previously dead sharks stopped doing their zombie thing and returned to being dead. Much to the dismay of the many hungry sharks still swimming around the Orca we were finally able to jump down into the boat from our precarious perch on the railing, rather than slipping overboard into their pitiless eyes. After finally subduing our latest guest, we fired up the engines and chugged back to the lab. Jim was not very talkative on the ride back, but at least by the time we tied up he had stopped glowering at me. Although Jim conducted several more collecting trips he never seemed to require the assistance of his most experienced knucklehead … er… um, I mean bare-handed shark catcher.