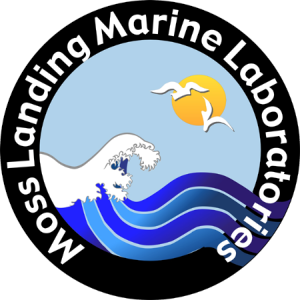 I don’t know who originally designed MLML’s Wave logo or when it was designed, but I think it was a great choice. To me, MLML’s Wave captured the same feelings of excitement as Hokusai’s The Great Wave. In both works of art, you can almost hear the churning seas and smell the salt spray. I also thought it was appropriate that the designers of the MLML Wave logo omitted the people and boats in peril shown in Hokusai’s work, and instead, used sea birds gently gliding in front of the sun to create a sense of calm and peacefulness. I believed that MLML’s Wave accurately portrays the labs relaxed atmosphere of teaching and learning.

When I graduated and left MLML, I asked for and received one of the MLML Wave posters, and I proudly hung the poster in my office at the California Maritime Academy, CSU, where I taught marine sciences for 35 years until I retired. The poster now hangs in my garage among my most treasured keepsakes.

An aside  by Jim Harvey: Lynn McMasters has been the MLML graphic artist for years, and has been responsible for many of the renditions of the Wave and other MLML artwork, including the current logo and sticker at the top of this blog.

Lynn told me (Jim) the original Wave logo was developed by a class at SJSU before MLML was started, and that the positioning of the birds in the image to form a "M" and an "L" was intentional.

Response from Chuck Versaggi: I see in the Lloyd Kitazano blog post and your endnote that, according to Lynn McMasters, it was her understanding that a SJSU class designed the MLML Wave logo. Well, I’d like to set the record straight: I designed that logo circa 1969-1970, which superseded a short-lived design that Dave Lewis created based on the Beatles Yellow Submarine. Alas, I don’t have any graphic evidence to support my claim, but I can assure you this is true. I could probably get Dave Lewis and perhaps Shane Andersen (cc’d) to corroborate this (Dave Lewis , in fact, did confirm). And, yes, the positioning of the gulls to evoke the “M” and “L” was my creative intention, as was the stylized wave inspired by Hokusai’s The Great Wave.

So we owe this awesome design to Chuck Versaggi, thanks Chuck.