John Heine, former MLML graduate student and DSO, self-published a book in 2012 entitled "Marine Dreams", about a marine lab in central California. You can guess what it is based on. We provide an excerpt for this weeks blog. We hope you recognize aspects of the book. This week we also feature pictures from former student, Scott Gabara. 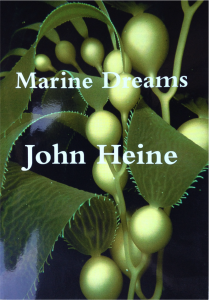 Monterey Bay has some of the thickest, richest kelp forests to be found.  The forests also harbor a myriad diversity of other seaweeds, invertebrates, fishes, birds and mammals. The giant kelp, Macrocystis, is one of the fastest growing plants on the planet.  It can grow a couple feet a day under ideal conditions.

Like forests found on land, the kelp forest has distinct seasons.  In the fall, when the days are warm and water circulation is low, the kelp starts to deteriorate, or senesce, and becomes weakened.  The first storms of winter can wreak havoc on the forest.

Diving in the kelp forest can be surreal at times.  Rays of sunlight stab through the surface kelp canopy and bend all over on their way to the bottom.  The kelp appears to be golden brown, and when waving back and forth in the surge, it can be quite hypnotizing.  Swimming through the forest brings all kinds of opportunities to see large fish like cabezon, lingcod, and rockfish.  If you are lucky you might swim with a harbor seal, sea lion, or sea otter.

But most of the time for Elkhorn Marine Lab students the kelp forest was just their location for experiments.  The thick canopy just means pulling up the outboard motor and rowing across the kelp canopy, as there is often no way to motor through it.  The canopy can be so thick and stable that small boats can be tied off to it, not even needing to anchor.  The spectacular days of 100 foot visibility are few, and typically the water is cold and dark.

Will was trying out his experimental apparatus for the first time in open water.  He had tried it in the lab, and it had worked just fine, but it was a whole different ballgame out here in the ocean.  His setup consisted of three acrylic boxes, which held five liter-sized canning jars for the seaweeds.   One group of jars was covered with aluminum foil to simulate dark, nighttime conditions.  He had to take the jars down without the lids on, because if they were screwed on at the surface, he would never get them off underwater due to the pressure.

After they tied up the boat to the kelp, he lowered the boxes down on a line to the bottom.  He carried a bag with the jars, lids, magnetic stir bars, and assorted tools.  His buddy, Ricardo, carried the sensor for the light meter.  Ricardo, better known as “Ricki”, was an international student from Argentina.  He could be found around EML at all hours of the day and night sipping on his mate from the traditional gourd.

On the seafloor, Will assembled the boxes and attached some weights to keep them steady on the bottom.  He collected some Sea Grapes, a bushy red seaweed which resembled small table grapes, and cut them into small pieces to be placed into the jars, along with a magnetic stir bar, which was used to keep oxygen bubbles from forming.  When all the jars were set up, including two “controls” with water only, he wrote down the start time on his slate.  Will collected a jar of ambient water to measure the initial dissolved oxygen concentration, and Ricardo cable-tied the light sensor to the side of the middle box.  Then they headed up to the surface for a break.

“Yeah, not too bad, thanks for the help,” Will replied, as he unscrewed the top off the thermos and poured some hot coffee.  He was shivering already from just the first dive.  I still need to order that wetsuit he thought.

“Did you see that wolf eel?” asked Ricki.

“Right next to the boxes!  I can’t believe you didn’t see it,” exclaimed Ricki.

“Well, I was a little busy.”  It was common that you only saw what you were looking for, and often two people on the same dive saw different things.  He wished that Ricardo had pointed it out though, as he had never seen a wolf eel underwater.  He knew they could get to be about 5 feet long, and looked menacing, as they open and close their toothy jaws to pump water across their gills.

Will got out the photometer, which measures the light intensity underwater.  He hooked up the end of the cable that led to the collector on the sea floor.  After taking ambient readings in the air with the deck cell, he took some readings from underwater.  The kelp canopy typically filters out 99% of the surface light in only the top few inches of water, so light levels on the bottom can be quite low.  This was one of the questions Will had for his thesis:  how do the seasonally variable light levels affect the photosynthetic rates of some common seaweeds?  He was measuring both of these for the first time today.

As they got their tanks switched for the second dive, a sea otter popped up through the kelp nearby.  “Sandra is thinking of a sea otter costume for the Halloween party,” said Will.

“Yeah, I said the same thing.  I suggested something a little more exotic like a narwhal.  What are you thinking of coming as?” asked Will.

“Maybe a homeless person, or maybe as a sponge, I’m not sure yet.  And you?” Ricki asked.

“Maybe kelp.  But does everybody have to come as representing the organism that they study?  It all seems so dull, so predictable.  Maybe I’ll just pick up a mask at the thrift store and be anonymous all night, just wander around freaking people out.  Like Nixon or something.”

“Sounds alright to me” Ricki said.

“On this dive we need to take down an extra scuba bottle and the stirring platform and give each bottle a 30 second stir.  Would you mind taking pictures of the setup?  I can use some for my thesis defense and talk at WSN (the Western Society of Naturalists, often confused with a nudist group)” said Will.

So they headed down for the second dive.  Will set up the stirring platform and placed the first acrylic tray on it.  The air-driven magnets in the jars were spun by compressed air from the scuba tank.  Will had devised this setup based on a similar one he had used as an undergraduate.  The idea was to keep oxygen bubbles from forming, because if they came out of solution, he wouldn’t be able to measure the oxygen concentration accurately.  After the 30 second stir, he did the same with the other two trays, while Ricki snapped some photos.  So far, so good, everything seemed to be working out.

After a three hour incubation time, the experiment was over.  Will and Ricki brought the jars back up to the boat, and Will put a chemical into each jar to “fix” the solution, so he could measure the oxygen concentration later in the lab.  They packed the boat up to head back to shore.   Everything needed to be well stowed, as they had to take the Zodiac through the surf up onto the sandy beach.  This was a tricky maneuver, which required some skill, patience, and timing.  As they neared the surf, Will slowed down and looked back over his shoulder to see if there were any waves coming.  His method was to wait until a set broke through, then to ride near the back of the last wave and on up to the beach.

He unlocked the engine tilt mechanism, so it would tilt up if (when) they hit the bottom.  When the time was right, he gunned the motor and they surfed right up onto the sand.  He quickly tilted the motor, and they hopped out and used the surge to drag the boat up higher on the beach.  This was the critical moment, because if the surf was high, a wave could break over the transom and swamp the boat, making it impossible to move.

They swung the boat around 180 degrees so the bow was facing the surf.  This helped to deflect the waves and keep the inside dry.  Ricki held the bow steady while Will started to unload, carrying gear up to the steps to the parking lot.  He unloaded the sensitive scientific equipment first, then they switched places and Ricki unloaded the dive gear.

When they were all packed up, they headed off to the boathouse to rinse the gear and stow it away.  The boathouse was an old fire station that was in the harbor, which made it ideal for storing boats on trailers and for launching boats to go up the slough.  It was a busy place, as most of the class field trips staged their equipment here.  After Will and Ricki cleaned up and stowed the gear, they headed down the street to the lab to work on their thesis projects.