2021 was a complex year to be a graduate student, with global societal issues demanding our attention and energy alongside our usual scientific workload. The emergence of the COVID-19 vaccines brought with it the hope of being able to safely socialize in-person with our friends and loved ones again. The resilient Moss community was able to return to some in-person activities in the Fall of 2021, including hosting the first lab Halloween party since 2019!

During this rollercoaster of a year, 14 students successfully defended their MLML theses virtually via Zoom. Please join me in congratulating the following students:

Read below for pictures of the graduates, and explore the links to their thesis announcement posts with more info about their projects and the YouTube recordings of their defenses.

END_OF_DOCUMENT_TOKEN_TO_BE_REPLACED

Congratulations to the twelve students that successfully defended their theses in 2018!

END_OF_DOCUMENT_TOKEN_TO_BE_REPLACED 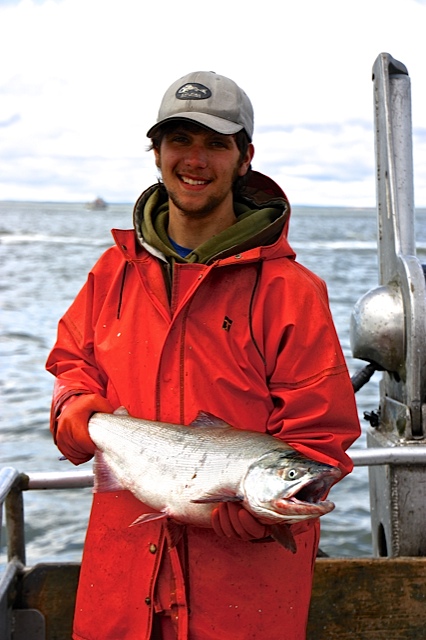 Ryan Fields serves as lab technician to the Fisheries and Conservation Biology Lab (FCB lab), where he also studied for his Master's degree. As a technician Ryan continues to participate in lab projects that include California Collaborative Fisheries Research Program and the development of new video lander tools to improve fisheries management of Pacific rocky reefs.

This October, the Fisheries and Conservation Biology Lab completed a month-long research cruise along the California coast testing a new video camera tool designed to survey fishes. This was both a fantastic project and trip, and I want to share a few highlights from video we collected. The main goal of this project was to design, build, and demonstrate the feasibility of deploying a video lander tool at a scale that is useful for fisheries management agencies (i.e. a coastwide survey). We were very successful in meeting this first goal, and in 24 days we conducted 419 visual surveys across 295 miles of coastline between Half Moon Bay and Anacapa Island.

END_OF_DOCUMENT_TOKEN_TO_BE_REPLACED

Congratulations to the eight students that presented results of independent research at the annual Western Society of Naturalists (WSN) meeting in Tacoma, WA this November 8-11, 2018!

WSN is a scientific society with a strong focus on ecology, evolution, natural history, and marine biology. Beloved by scientists primarily from Canada, Washington, Oregon, California, and Mexico, the annual conference provides a supportive environment for graduate students to present their research each year.

Please continue below to read more about everyone's research.

END_OF_DOCUMENT_TOKEN_TO_BE_REPLACED

I stared around at my dusty colleagues, blinking stupidly under the fluorescent lighting of the In-n-Out. Freed from the van which had been my home for countless hours, I found myself suddenly conscious of my briny skin and stiff, desert-impregnated clothes. These trappings of nomadic life, which I had up to this point worn as a badge of honor, felt suddenly dingy and out of place next to the immaculate white and red of the establishment. While I gazed around in disbelief at the hustle and bustle of Southern Californians sneaking a hamburger dinner, a passage from John Steinbeck’s The Log from the Sea of Cortez worked its way up from my subconscious.  He writes of himself and his fellow explorers: “The matters of great importance we had left were not important….Our pace had slowed greatly: the hundred thousand small reactions of our daily world were reduced to very few.” Only now, amid the harsh reality of commercial America did I realize the truth of his words- during the past two weeks in Baja my reactions had indeed been reduced to very few.

I couldn’t tell you at what point I first began my transformation from frantic Moss Landing Katie into Katie the easy desert rat. It could have been in strolling in Cataviña among the Seussical wonder of boojum trees, or while floating next to a panga buoyed up by kelp and post-dive euphoria. Regardless of the timeline, I can tell you that the Katie of Isla Natividad had few concerns. Her most pressing questions were: When will I next eat? When will I next sleep? Where are the orange fish? What’s the Spanish word for that? (Luckily for me, on Isla Natividad, the word for Garibaldi, is, in fact, Garibaldi.)

The simplicity of life that results from a unique combination of isolation and intense focus is one of the utter joys of field work. I had toyed with such bliss before in the fanciful rainforests of Australia, or the bright turquoise waters of the Bahamas, but my elation in Baja California Sur dwarfed that of previous excursions. Perhaps I have matured as a naturalist, or perhaps, as I suspect, Baja is a truly transcendent place.

On my boat ride out to Isla Natividad, as I drew ever closer to its brown crags, I must admit that the John William’s score of Jurassic Park was on infinite repeat in my mind. The massive Macrocystis mats stretching before me certainly gave the impression of the Land that Time Forgot. (My later encounters with nocturnos, otherwise known as black-vented shearwaters, certainly built upon this impression. These birds return to the island each evening under the cover of darkness to flap and stumble towards their nest holes. This activity is accompanied by calls that are, in a word, unsettling; they seem to have been inspired by a velociraptor with a sinus infection.)

Amid these splendors, my days on the island had a lulling simplicity. The warm southern sunlight streaming through my cabin window in the morning would wake me. I would stumble awkwardly out into the light and shuffle my way down to the dive locker which munching my morning meal. In an hour or so I’d scramble into the back of a white pickup with my classmates, awkwardly stabilizing SCUBA tanks with my feet as we descended the steep boat ramp. Once aboard a sturdy panga, I’d assemble my dive gear in its startlingly blue interior. Our boat captain, Jesus, would navigate the thick kelp beds with skill, occasionally raising the outboard motor to throw up a shower of water and kelp pieces. On our ride out to that day’s dive spot we might be lucky enough to catch a glimpse of a refreshingly shy sea lion or dolphin.

These rides were breathtaking, but my most treasured moments came in the unique silence that one can only experience on SCUBA. The rhythm of your breathing falls in time with the sway of the kelp and the pulse of ocean surge. As you weave through the kelp forest even the infinitesimal problems that remain with you on Isla Natividad float away with your exhaled bubbles. Emptied of my surface thoughts, I’d set myself to following the pugnacious, yet comical fish that California has chosen as its representative. I hovered above, and beside, and occasionally below these flamboyantly orange fish for countless minutes. Even now, I dream in orange. I timed the often clumsy, yet somehow beautiful dance between a territorial male and his would-be usurpers. My constant vigil was interrupted only by an occasional glace to scribble notes on my slate (white- what a revolutionary color!) or a brief interlude to find another unwitting subject. Garibaldi are, quite honestly, ridiculous, but their desperate self-importance gives them an endearing quality. Their willingness to attack other fish, their own kind, starfish, transect tapes, and even divers that may intrude upon their precious territory is nothing short of foolhardy. But you cannot help but admire their staunch determination. And, while I will never strive to emulate their pugnacious natures, I do hope that my brief time among them taught me something about focus and perseverance.

Eventually these submarine reprieves would be interrupted by my frustrating human need to breathe oxygen. I would haul my awkwardly burdened body back into the boat, rest, and repeat. My eventual return to land each afternoon was as reluctant, but not quite as jarring, as my return to California, USA. Looking back, I can comfortably say, life was simpler on Isla Natividad.

Imagine; you live in a small community on a remote island in the Pacific Ocean where a hardworking life is simple and fulfilling. One day you are told that a group of 20 will be travelling to your island to study it, using your resources and living amongst you for over a week. The people of Isla Natividad welcomed us with more than just open arms. During our first meeting, they remained patient while some of us tried to speak our best broken Spanish, were genuinely curious about our projects and most of all, elated to help. Mayte, the island’s tourism director, was constantly making herself available to provide us transportation on the island and show us around. Captains Rafael and Jesus drove the SCUBA teams to their sites everyday accompanied by divemasters Ivan and Johnny.  Needless to say, they wanted to be involved as much as possible, and it was much appreciated!

Studying on Isla Natividad was something that I didn’t want to end. Not only because of their way of life and friendly locals, but because there is so much more to explore. My intertidal project comparing invertebrate and algal cover inside and outside one of the MPA’s was barely the tip of the iceberg. After a week of exploring the intertidal, I was left with more questions than when I arrived. A workday consisted of sampling transects at low tide, then exploring tide pools to look for juvenile opaleye and sea hares while simultaneously birdwatching the osprey nested on “castle rock” as  referred to by locals(basically multitasking at its finest).

I am truly appreciative for this experience and have learned so much in such a short amount of time. I hope my trip to Isla Natividad was not a once in a lifetime experience, but if so, I am grateful I was able to explore and contribute to the scientific understanding of this unique island.

Congratulations to 14 students who defended their research theses and graduated from our program this year! Student research spanned across continents, taking us from the kelp forests of California, to the deep seas of South Africa, and even Antarctica!

The following students were awarded a Masters of Science in Marine Science:

Read below to learn more about the graduates' research. Feel free to leave a comment if you have any additional questions!