Congratulations to the eight students that presented results of independent research at the annual Western Society of Naturalists (WSN) meeting in Tacoma, WA this November 8-11, 2018!

WSN is a scientific society with a strong focus on ecology, evolution, natural history, and marine biology. Beloved by scientists primarily from Canada, Washington, Oregon, California, and Mexico, the annual conference provides a supportive environment for graduate students to present their research each year.

Please continue below to read more about everyone's research.

*Winner of the Best Student Presentation Award in Organismal/Population Biology!*

Climate change is projected to expose organisms in the California Current System (CCS) to decreases in both oceanic pH (ocean acidification) and dissolved oxygen (DO; hypoxia). In addition, climate change is predicted to alter wind patterns, expanding the upwelling season and the frequency of exposure to these conditions. Gopher rockfish (Sebastes carnatus), a viviparous species, inhabit nearshore waters along the CCS. To determine how exposure to these stressors during gestation affects larval performance, we studied gene expression in S. carnatus larvae at two time points; 1) at birth after a month of gestation in one of three treatments: control (pH 8.0, DO 8.0 mg/L), low pH (7.5), low DO (4.0 mg/L), and 2) after a subsequent 5-day exposure to each treatment. We utilized RNAseq to assemble a de novo transcriptome and analyze differential gene expression (DGE) for each timepoint. We found that DGE profiles were strongly driven by the maternal treatment condition rather than the subsequent larval exposure. Larvae undergoing embryogenesis in low pH showed a stronger DGE response than those in a low DO maternal environment relative to ambient conditions (486 vs. 78 DGE, edgeR: FDR < 0.01). Both stressor treatments decreased expression of genes involved in developmental processes, including eye (low pH group) and spinal (low DO group) development, deformities that were also observed at  parturition. Our results suggest that gestational exposure to low pH and low DO induces significant changes in the expression of genes that may be critical for normal larval development.

Nutrient cycling is an essential ecosystem process. In marine systems, organisms supply limiting nutrients to the ecosystem via excretion of metabolic waste products. Surprisingly, relatively little is known about the magnitude and variability of this recycling regime at the species- or community-level, especially in temperate kelp forests. To address these questions, we investigated the supply of nutrients excreted by the dominant members of the fish community in California. Rapid field incubations were conducted to measure the amount of dissolved ammonium (NH4+) released per individual as a function of fish size across 10 common species that cumulatively represent 90% of the fish biomass. Ammonium excretion rates were combined with fish density and size structure from visual SCUBA surveys to calculate the total nutrients supplied by fishes at the population and community levels. Our preliminary results indicate that fishes contribute a substantial amount of nitrogen to the ecosystem (5- 10 mmol NH4+ m-2 day-1), potentially surpassing the flux of nitrate delivered by upwelling and other oceanographic processes. These rates are consistent with those reported for tropical reefs but are among the first in temperate systems, indicating that fish-derived nutrients may be an underappreciated process that influences kelp forest productivity, especially during low nutrient conditions (e.g. El Niño). Further research is aimed at understanding fish-derived phosphorous supply and potential anthropogenic effects on nutrient cycling in kelp forests. 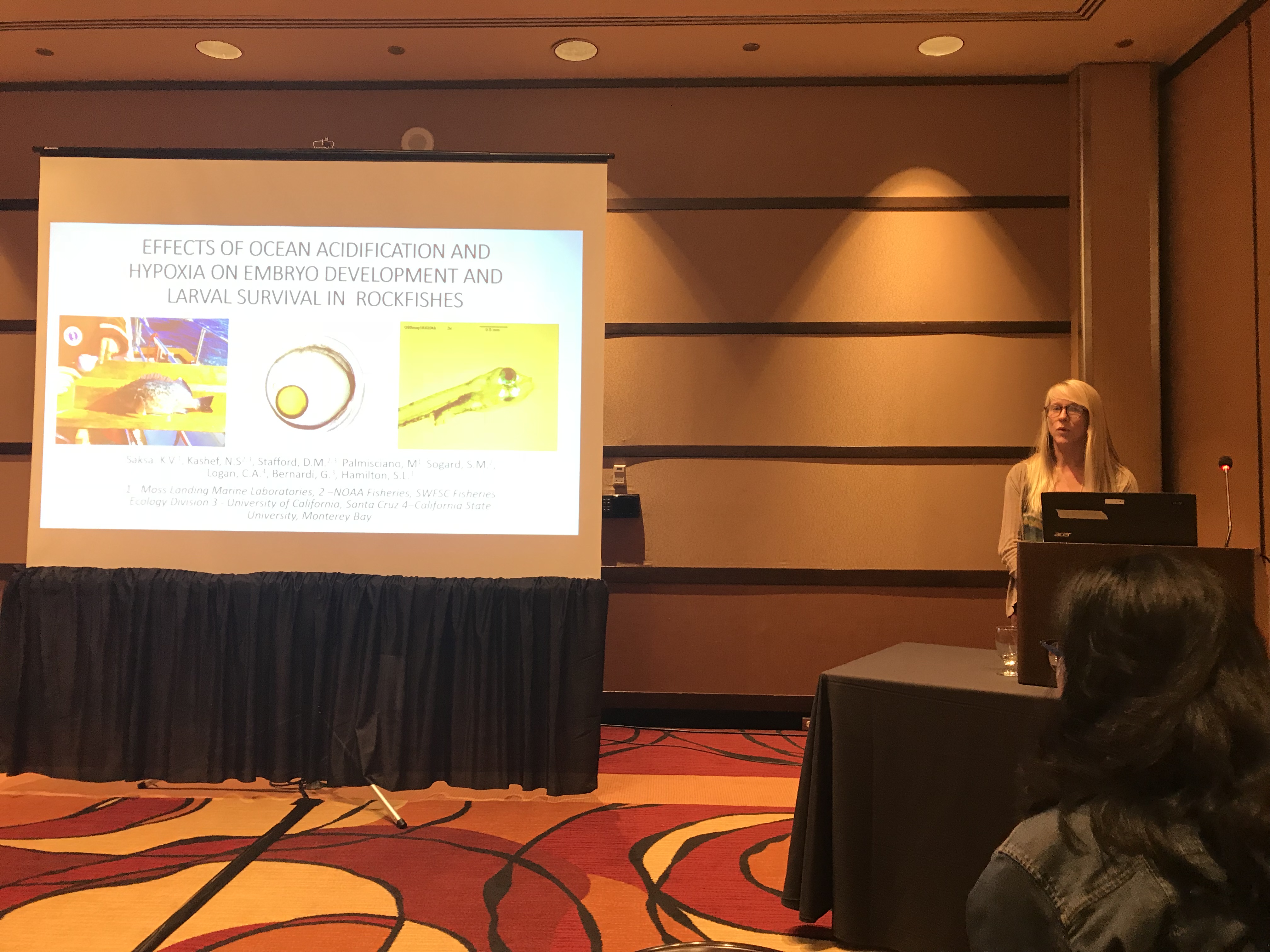 The California Current ecosystem is experiencing dramatic changes in ocean chemistry resulting in ocean acidification (i.e., decreasing pH) and hypoxia (i.e., lower dissolved oxygen [DO] levels). These changes are exacerbated by increases in upwelling intensity. Gopher rockfish (Sebastes carnatus) and Blue rockfish (Sebastes mystinus) are ecologically and economically valuable rockfish species with differing life history characteristics that affect their exposure to low pH and low DO water. To test how ocean acidification and hypoxia may interact to influence the reproductive process in rockfish, we exposed gravid females of both species to 4 treatments throughout the gestation period: 1) low pH (pH 7.5); 2) low DO (DO 4.0 mg/L); 3) a combined stressor (pH 7.5 x DO 4.0 mg/L); and 4) control (pH 8.0 x DO 8.0). At parturition, the proportion and type of larval deformities were quantified. Post-parturition, larvae from each brood were seeded into each of the 4 treatments to evaluate survivorship as a function of the prior maternal treatment conditions and the subsequent larval treatment. Preliminary results indicate that larval survivorship in S. carnatus is significantly influenced by the low pH maternal gestation treatment, while there was no effect of the subsequent larval exposure on survival. S. carnatus larvae from low DO and combined stressor maternal treatments exhibited increased deformities. Our research indicates that future replenishment of rockfish populations may be compromised by the impacts of ocean acidification and hypoxia on reproductive processes.

Global climate change is expected to increase the frequency and severity of upwelling events in the California Current Ecosystem, yielding reductions in pH and dissolved oxygen (DO) in coastal marine environments. Juvenile Copper (Sebastes caurinus) and Gopher (S. carnatus) Rockfish may be particularly vulnerable to low pH and hypoxia as they settle nearshore during upwelling season. To determine how future projected upwelling conditions will impact rockfish fitness, we exposed juveniles to one of the following treatments: periodic upwelling (a recurring cycle of 8 days of 7.3 pH, 2.0 mg/L DO, followed by 8 days of recovery at ambient conditions), extreme static reduced pH/DO
(7.3 pH, 2.0 mg/L DO), moderate static reduced pH/DO (7.5 pH, 4.0 mg/L DO), or a static ambient treatment (~8.1 pH, ~8.6 mg/L DO). Responses to sublethal stress were evaluated through behavioral and physiological trials including escape challenge, brain lateralization, critical swimming speed, and aerobic scope. Both species exhibited significant impairment in aerobic scope and swimming ability under simulated upwelling conditions, performing equally to fish in the extreme treatment. In the fluctuating treatment both species appeared to recover fully when returned to ambient seawater for 6-7 days, but Copper Rockfish showed reductions in growth rate, suggesting lasting impacts of exposure. Evaluation of the other response variables is underway. This study will help elucidate the species-specific physiological resilience of rockfishes to variable pH and hypoxia at a critical life history stage.

Territory defense involves a tradeoff between defense costs and territory gains. Damselfish are pugnacious territory defenders and provide an opportunity to study the ways in which defense costs are balanced. Since relatively little research has been conducted on Hypsypops rubicundus (Garibaldi), the territorial behavior of the species around Isla Natividad, BCS was assessed. Territorial chase rate, foraging bite rate, and length was recorded for each territory holder as well as the length and species of intruders chased and chase initiation distance. This study indicates that chase rate on conspecifics increases as Garibaldi density increases. Chase initiation distance decreases as the size difference between territory holder and conspecific intruder increases, thus Garibaldi expend more effort to chase intruders of a similar size. There is no relationship between size difference and chase initiation difference with heterospecific intruders. C. punctipinnis were chased at the greatest distance from the nest, S. pulcher at an intermediate distance, and G. nigricans at the least distance. There is no difference in chase rate or chase initiation distance between reserve and control sites. The increased chase rate at higher Garibaldi density may stem from a higher encounter rate or a heightened competition for territory. Conspecifics of a similar size are likely chased at a greater distance because they are most apt to usurp territory. Further investigation, particularly when Garibaldi are guarding eggs, is required to determine chase selection on heterospecifics. 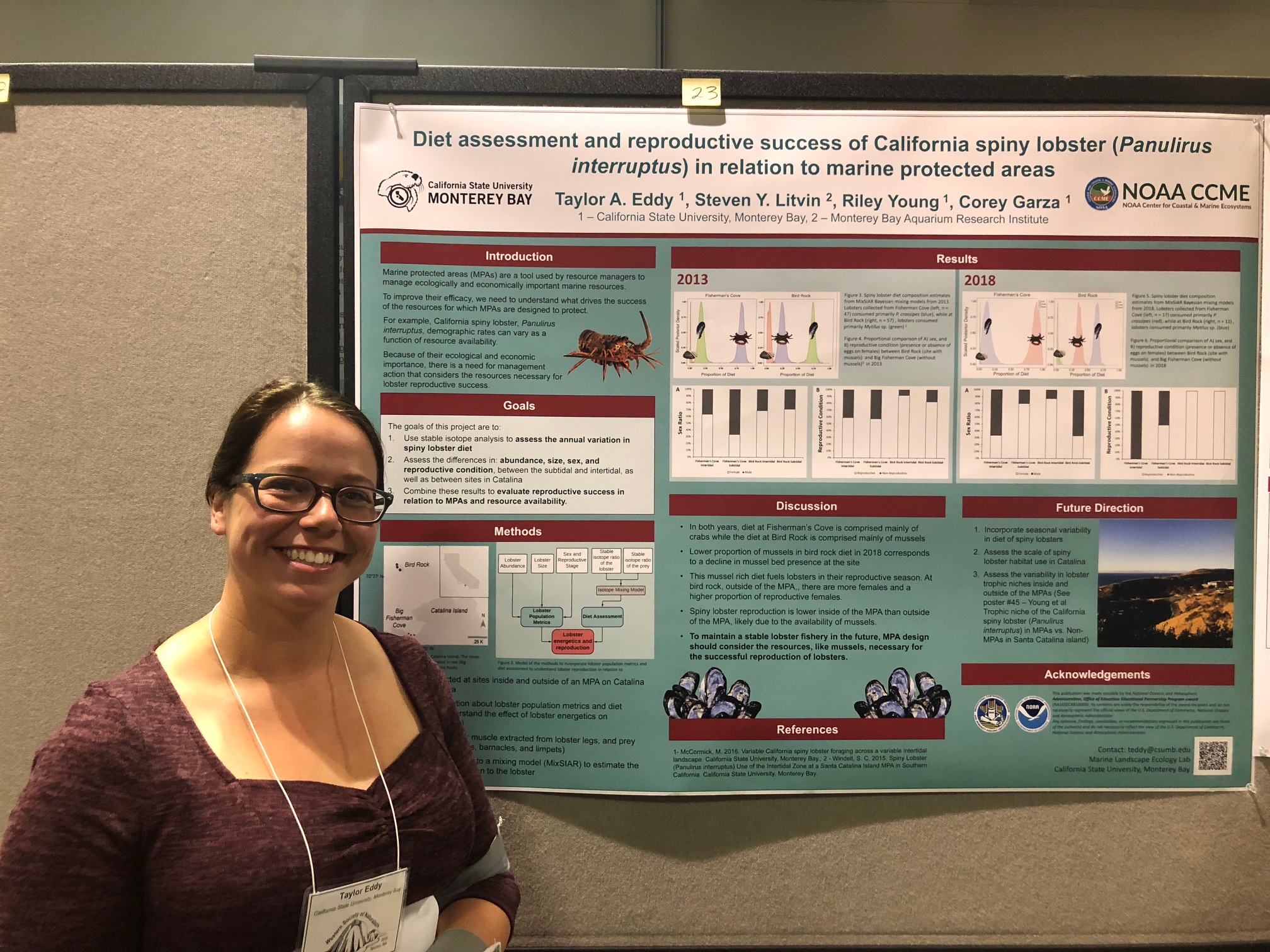 Marine protected areas (MPA) are used to manage ecologically and economically important resources. To improve their efficacy, we need to understand what drives the success of the resources for which MPAs are designed to protect. For example, California spiny lobster, Panulirus interruptus, demographic rates can vary as a function of resource availability. Due to their ecological importance, as well as being the third highest grossing fishery in California, there is a need for management action that considers the resources necessary for lobster reproductive success. Previous studies have shown that sites with a high density of intertidal mussels can support a larger abundance of lobsters and a higher proportion of fecund females. Thus, understanding the energetic dependence of spiny lobster on intertidal prey resources is critical to effectively manage this species. The goal of this project is to use stable isotope analysis to assess the annual variation in spiny lobster diet and evaluate reproductive success in relation to MPAs. We expect to find that spiny lobster reproductive success will coincide with a lipid and caloric rich diet comprised predominantly of mussels. Therefore, the success of the lobster population will be more dependent on access to intertidal resources than the protected status of the sites.

"Examination of spatial differences in demography and life history of Canary rockfish (Sebastes pinniger) along the U.S. West Coast" 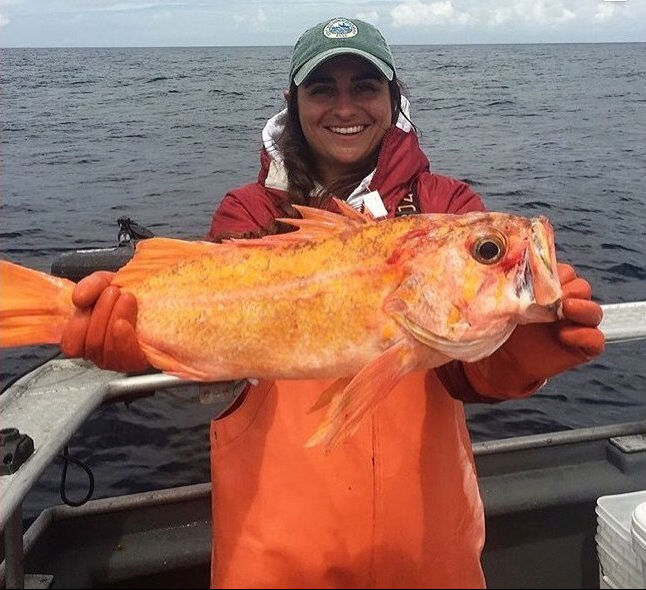 Differences in fundamental biological processes such as growth and reproduction can greatly influence localized population dynamics. Therefore, it is important to characterize spatiotemporal variation in life history traits of harvested species to better understand their biological limitations and develop management plans to maximize fishery sustainability. In this study, we worked collaboratively with volunteer anglers to collect Canary Rockfish (Sebastes pinniger) – an economically and ecologically important groundfish – throughout their contiguous U.S. west coast range during the years 2017-2018 (N=1500). We used morphometric and maturity data to evaluate regional differences in Canary Rockfish size structure and size at 50% maturity. Our preliminary results indicate a significant latitudinal cline in total length (mm) and size at 50% maturity, where Canary Rockfish in northern regions grow larger and mature at larger sizes than Canary Rockfish in southern regions. Comparing sexes, males were found to mature at larger sizes for all regions except Oregon. Additional analyses of growth, age structure, condition, and mortality from otolith analysis will help to refine our understanding of latitudinal variation in life history and demographic traits. Explicitly incorporating this spatial variability into stock assessment models may help improve management.

"Groundfish habitat associations on the "lost reefs" of the MBNMS; implications for conservation and management" 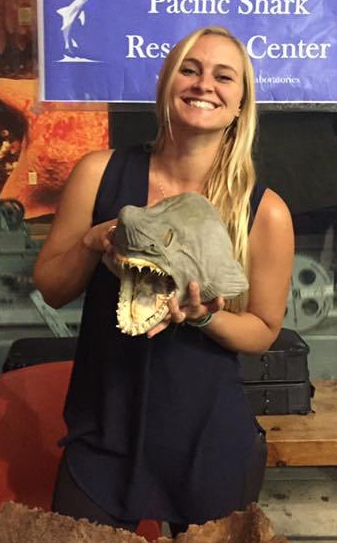 Management of marine ecosystems requires accurate, quantitative, and spatially explicit information on species distributions at scales that are relevant to the management process. The “lost reefs” comprise an understudied area in 30 to 40 meters depth that lie between shallow waters, surveyed extensively via SCUBA, and deeper waters, which are surveyed using submersibles. Major ecological and management-based questions concerning fish assemblages of the “lost reefs” remain unresolved, including: (1) spatial and temporal variability in abundance, size distributions, and community structure and (2) microhabitat associations, including ontogenetic movements between shallow and deep zones. To address these questions, diver-held stereo video is coupled with underwater visual census techniques and Digital Elevation Models to evaluate species abundance, richness and microhabitat associations in the “lost reefs”. To date, this research has been conducted in the Carmel Canyon of the Monterey Bay National Marine Sanctuary (MBNMS). Habitat suitability models created from this data will be used to improve spatial management strategies for the MBNMS by combining them with existing MPA maps to assess the effectiveness of previously established protected zones. Data and analyses from this project will aid in adaptive management by contributing to the MBNMS’s Site Characterization, Condition Report, and the new Sanctuary Management Plan. Video records from this project will contribute to the permanent imagery archive for use in answering long-term questions and for public outreach.