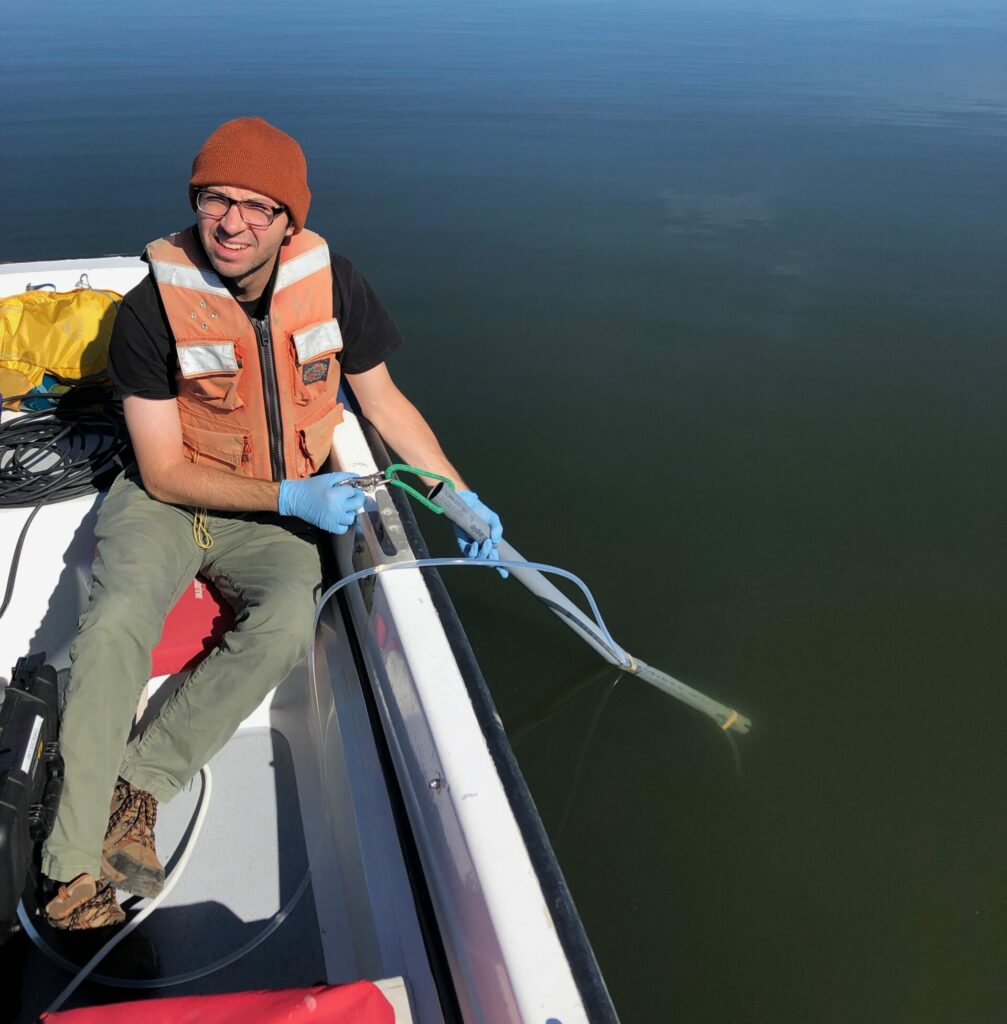 One of the many points of pride that Moss Landing Marine Laboratories holds up is the legacy of our former director Dr. John H. Martin, and his formulation of the Iron Hypothesis. This hypothesis, and the experiments conducted to prove the hypothesis transformed our understanding of oceanography as well as our understanding of climate change and earth’s history.

Throughout the ocean, the growth of microscopic plants, or micro-algae in a particular region is controlled primarily by the availability of nutrients (things like nitrate and phosphate that are like food to a plant) within that region. These micro-algae are extremely important, not only for oxygen production but for the uptake of the greenhouse gas, CO2 from our atmosphere, and their eventual transfer of that carbon to the deep ocean. This process of removing greenhouse gases from the atmosphere is a vital component controlling the earth’s climate, and its function relies almost entirely on the availability of nutrients.

The term “macro-nutrients" in this case generally refers to nitrogen, phosphorous and silicon. This general paradigm holds up pretty well when you look at most regions of the ocean. However, in some important areas like the Southern Ocean, the water is rich with the typical nutrients that are required for micro-algae growth, but is still very poor in the amount of micro-algae that grow there.  This left scientists largely scratching their heads about why micro algae appeared not to really grow in this region. This then is where John Martin’s Iron Hypothesis comes into play.

John Martin hypothesized that rather than typical nutrient limitation, these regions, called HNLC regions (High Nutrient Low Chlorophyll) must experience limitation by iron, which is a micro-nutrient for micro-algae. Martin argued that when the earth’s climate was more extreme, before the last glacial period, and CO2 concentrations were higher, higher wind strength and speed carried iron from the crust of the earth as dust to the ocean, thus fulfilling this limitation. Martin continued to hypothesize that the fulfillment of this requirement and resultant removal of CO2 from the atmosphere (one of the main greenhouse gases) led to a large scale cooling of the atmosphere, causing global glaciation. John Martin famously joked, “Give me half a tanker of iron, and I’ll give you the next ice age.”

The Testing of the Iron Hypothesis

Shortly after his passing in 1993, a research team including MLML and MBARI researchers Kenneth Coale and Kenneth Johnson put the Iron Hypothesis to the test. I’ve added the 1996 paper written about the results of this experiment to the references section of this blog, and I do highly encourage everyone to check that out. The method of testing this hypothesis was really quite simple: drop some iron into the Southern Ocean and see if it would spur the growth of micro-algae in the region. In order to validate this, two separate research vessels were used: one to drop iron, and the other to measure the change in primary productivity.  As you can probably guess by this point, the iron hypothesis was quite well validated by this, and in fact produced a bloom that was visible from space. and by future experiments further cementing the concept of iron limitation in phytoplankton growth.

The Legacy of the Iron Hypothesis

Personally, as a member of the MLML Chemical Oceanography Lab who is studying aluminum, another metal that reaches the open ocean primarily through wind carry, I feel a certain special connection to the iron hypothesis and its impact on chemical oceanography. In addition to laying that groundwork, the development and validation of the iron hypothesis has helped us to further understand the impact of iron on climate change. As more and more carbon dioxide enters the atmosphere, it is predicted that wind speeds and strengths will pick up. In turn, it is then expected that greater amounts of dust from Antarctica and the other great deserts of the world will be carried into the ocean causing micro-algae blooms. While one may assume from our earlier discussion on carbon uptake that restarting these blooms would help to alleviate our carbon problems, the actual outcome of this is not quite so easy to predict.

One thing that needs to be considered is how quickly the climate is changing. In addition to capturing CO2, micro-algae need to be moved from the surface of the ocean down to the bottom in order not to simply decompose at the surface, which could decrease the oxygen at the surface layer, and possibly prevent the surface layer from receiving more CO2 in the case of saturation. When phytoplankton simply die at the surface, they are not dense enough to sink on their own. In general this process is performed by fish and zooplankton who consume and package the micro-algae into denser pellets (feces). This means that in order for the carbon that is taken up by the micro-algae to actually effectively leave the surface, there needs to be a massive community shift that can actually move to package and export them away. So while in a simple model one might hope that increased winds might actually help to buffer our problems, the situation is actually much more complex than that.

Additionally, a 2016 paper from Winckler et al. shows that there’s even more complexity when it comes to the iron hypothesis. Their study showed that in the equatorial pacific HNLC region was controlled by the movement of iron throughout the ocean rather than through the distribution of dust. These problems go to show the complex nature of climate change, and how some seemingly tiny and seemingly unassuming variables like iron can step up the complexity in a serious way once they’re understood. The fortuitous timing of John Martin’s hypothesis, preceding this era characterized by a changing climate cannot be understated. As we navigate through this massively important time in history, the iron hypothesis is one of our many lights in the dark to help guide and prepare us for the yet unknown.