We developed our own animal-worn datalogging tags that measure the fine-scale diving behavior of marine predators. Datalogging tags are an integral tool to studying marine predator diving behavior because they allows us to document animals where we are unable to follow them on their foraging trips.   These tags measure an animal's precise location, fine-scale movement and acceleration, temperature of the water, and the depth the animal dive (down to 1000 meters). These tags will be used to document emperor penguin diving behavior and track their movements while they forage at-sea. Emperor penguins are known to dive to great depths (564 meters) and for long durations (>27 minutes) in search of prey. Once the penguins return to the colony to feed their chick we will remove the tag and download the data from their journeys.

Datalogging tags can be purchased however they are very expensive and can be a barrier for many students and researchers. In collaboration with Dr. Birgitte McDonald, Katie Harrington, James Fahlbusch, and Parker Forman we developed a cost-effective and open source datalogging tag that is one third of the cost of current tags on the market. This open source datalogging technology will put high resolution, low cost, and customizable tags in the hands of more researchers.

Shipping our field gear to Antarctica

Although our field season is still 6 weeks away, preparations are in full gear. This last month we have been busy ordering research supplies.  We somehow managed to fit all the gear into 4 boxes that are now waiting to be shipped to Antarctica. One thing that is a little different, is we have to separate gear into items that can and can not be frozen so when they get to Antarctica they are stored properly for our arrival.  Students in the Lab are happy that we are sending this gear out so that they may have a little more room. 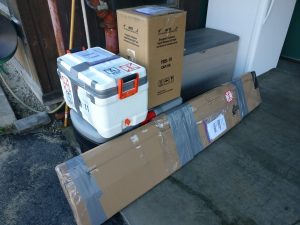 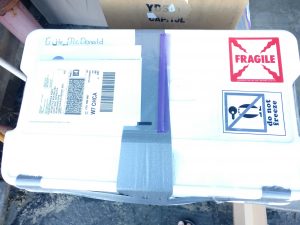 For More Information Pease Check Out Our Recent Blog Posts

Avian ecologist  have always used hoods as a method to cover the heads of the bird species they study. These hoods cover the eyes of the animal and reduce their stress while researchers take measurements such as weight, wing and bill length, and blood samples. Birds can be very sensitive to sudden movements, noises and changes in light and hoods are used to reduce these sensitivities by covering their eyes and ears. Once the hoods are placed over the bird’s head they quickly become more calm. Placing a hood on the bird creates a safe and comfortable environment for the subject while biological measurements are taken.

In preparation for our upcoming trip to Antarctica (October 2019) we have sewn our very own emperor penguin hoods. Each of these hoods has been hand made out of durable, soft, very thin and breathable dark fabric. These penguin hoods have a comfortable neck strap that allows us to adjust the fit of the hood per the penguin’s liking. There is an opening at the tip of the hoods that allows for the bill of the penguin to fit through and increases airflow for ease of breathing. The hoods are placed on the heads of the penguin similar to what it would look like if you placed a sock puppet on your hand (as displayed by Parker in the adjacent image). An eye cutout was placed on one of the hoods to display the approximate location of where the penguin eye would be located under the hood.

We are very excited to share our preparation processes as we get our gear ready for our trip to Antarctica. Stay tuned for upcoming posts on our penguin preparation: tag development, weight harness manufacturing, and more information on our upcoming trip.

For More Information Pease Check Out Our Recent Blog Posts

Background
Despite being the first emperor penguin colony discovered in 1902 during Scott’s Discovery Expedition(1901–1904) little is known about that at-sea behavior of emperor penguins from Cape Crozier. The first science expedition to study them was in 1911, when a small group from Scott’s Terra Nova Expedition team made the perilous journey to the colony in the winter to collect eggs. Since this early study, most research at the Crozier colony has involved counting the birds to monitor the population. This fall we will head to Cape Crozier to study the foraging ecology of one of the southernmost emperor penguin colonies. We hope that you will follow along on our adventure as we prepare for the field work, travel to Antarctica to study the birds, and analyze the data. We look forward to sharing with you new discoveries about the ecology of the emperors of the ice.

This is an internationally collaborative project with logistic support provided by Antarctica New Zealand and primary funding provided to NIWA as part of the project “Ross Sea Research and Monitoring Programme: is the world’s largest MPA effective” (New Zealand Ministry of Business, Innovation and Employment: 2017-2022). Additional funding has been awarded to Birgitte McDonald by the National Geographic Society (Grant # NGS-50069R-18) and SeaWorld Conservation Fund.

Project Objectives
As abundant year-round predators, emperor penguins have a significant top down effect on prey in the Antarctic Ecosystem. It is vital to obtain information on their foraging ecology to understand their role in the ecosystem and how this may change with environmental change. Our collaborative project will investigate the foraging ecology and habitat use of Ross Sea emperor penguins during late chick rearing, an energetically challenging phase of the life cycle when parents must meet the energetic demands of their rapidly growing chicks. Specifically, we will use a combination of video cameras, fine-scale movement data loggers, and stable isotope analysis to: 1) Determine the activity budget of emperor penguins and estimate energy expenditure during a foraging trip, 2) Identify key prey of emperor penguins and identify stereotypical behaviors associated with foraging on different prey types. 3)Combine the energy estimations with the diet and foraging success data, to assess if emperor penguins are foraging optimally, and 4) Integrate penguin behavioral data with environmental data to identify which environmental features are indicative of habitat preference and associated with energy gain. This study fills important knowledge gaps on energy balance, diet, foraging strategy, and habitat use of emperor penguins.

Follow researchers and students in the field as they take us with them on their adventures: