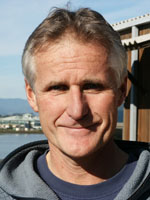 Dr. Jim Harvey is a professor emeritus and the former director of Moss Landing Marine Laboratories. He received his B.A. in Biology from San José State University in 1974 and his M.S. in Marine Science from SJSU/MLML in 1979. He then went on to obtain his Ph.D. in Oceanography from Oregon State University in 1987 and complete an NRC Postdoctoral Fellowship with NOAA’s National Marine Mammal Laboratory before returning to MLML as a course instructor in 1989. He was quickly promoted to assistant professor in 1991 and began leading the MLML Vertebrate Ecology Lab. After 20 years as a professor, Dr. Harvey was named the Director of Moss Landing Marine Laboratories, a position he held until his retirement in September 2021. Over the course of his career, Dr. Harvey advised 82 graduate students and served on 132 total thesis committees.

Dr. Harvey’s research interests include the ecology, morphology, and behavior of marine mammals, birds, and turtles; VHF/satellite-telemetry; marine mammal/fisheries interactions; vertebrate sampling techniques and experimental design; age and growth; population and trophic dynamics; and marine mammal stranding studies. His past research has included studies of population dynamics, food consumption, and behavior of harbor seals (Phoca vitulina); behavior of rehabilitated harbor seals released to the wild; use of acoustical deterrents in marine mammal/fisheries conflicts; radio-tagging gray whales (Eschrichtius robustus); and potential effects of toxic pollution on harbor seal health and reproduction. He was involved in the responses to a 1979 mass stranding of sperm whales (Physeter macrocephalus) on the Oregon coast, the 1988 entrapment of three gray whales in the ice near Barrow, Alaska, and the 1989 Exxon Valdez oil spill in Prince William Sound, Alaska.

Dr. Harvey serves on a federally-mandated Task Force devoted to sea lion/steelhead fisheries interactions at the Ballard Locks in Washington. He is a member of the Research Activity Panel for the Monterey Bay National Marine Sanctuary, the Reserve Advisory Committee for the Elkhorn Slough National Estuarine Research Reserve, and the Research Advisory Committee for The Marine Mammal Center.