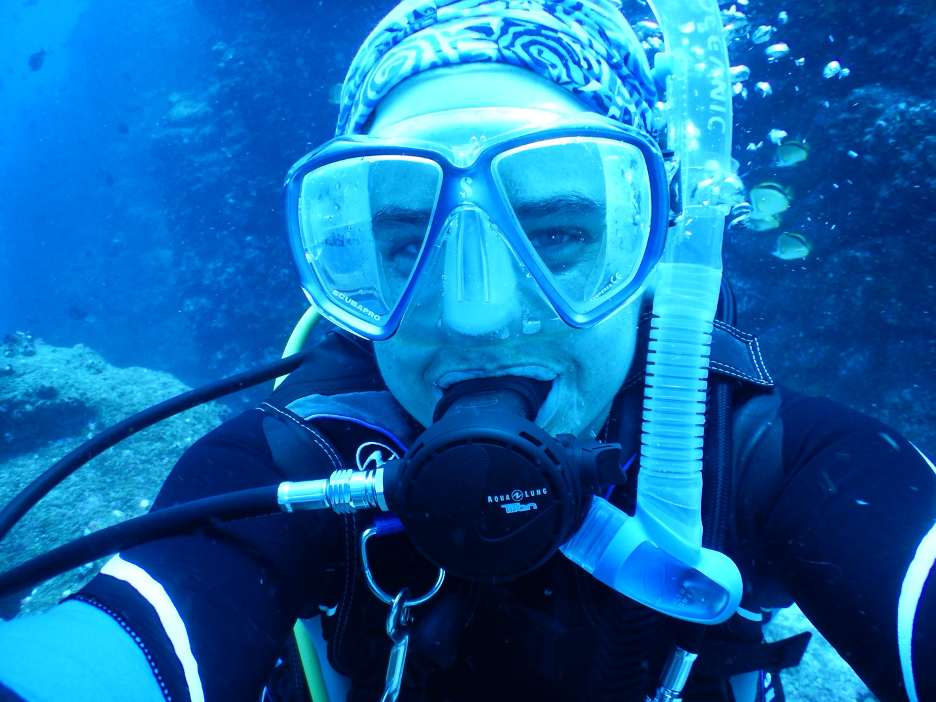 If you have seen photos of coral reefs, you probably agree that coral reefs are beautiful, colorful seascapes. Coral reefs are indeed picturesque, but they are also extremely important to humans for a number of reasons. Coral reefs protect coastlines from storm surges and erosion, support local economies through tourism, and uphold diverse ecosystems that sustain important fisheries. The services of reefs are valued at $375 billion per year and 25% of fish depend on these key habitats.

Despite their economic and ecological value, coral reefs around the world are dying. Pollution and overfishing contribute to coral decline, but increasing ocean temperatures from greenhouse gas emissions is the most severe threat to coral reefs.

Healthy corals are colorful due to a symbiotic relationship with photosynthetic algae called zooxanthellae. Other than pretty colors, the zooxanthellae also provide the coral with food and oxygen while the coral produces a calcium carbonate skeleton that provides a protected environment for the algae. When the water temperature is too hot, a coral expels its zooxanthellae and only the white skeleton remains – a process called bleaching. Although corals can recover from bleaching, scientists project that reefs will experience more frequent and more severe mass bleaching events in the future due to increased ocean temperatures from climate change.

The longest and most widespread bleaching event on record occurred just a few years ago from 2014 to 2017 and resulted in almost complete coral loss at several locations around the globe. As the ocean continues to warm due to climate change, coral reefs are projected to decline severely in the future.

It’s difficult to forecast which corals will survive bleaching. During a heat stress event, some species of corals are able to withstand the increased temperature and appear to be more resilient than others. For example, there are two corals from the same species that occupy the same location on a reef. Despite being exposed to the exact same environmental conditions, one coral recovers from bleaching while the other one dies. This variability in bleaching recovery makes it difficult to predict which corals will survive increasing temperatures and nearly impossible to assess how coral reefs as a whole respond to thermal stress.

Most past studies have primarily focused on tracking individual corals. Measuring individual corals’ response to increased temperatures can show us patterns in coral recovery, but a general population approach is needed to better understand coral recovery to increasingly warmer water. Until recent advances in technology, it was difficult to monitor hundreds of corals over time. The monitoring process involved hours of underwater time conducting scuba surveys which was time consuming and restricted our ability to monitor large numbers of individual corals and numerous sites.

To address this issue, NOAA Pacific Islands Fisheries Science Center (PIFSC) has been working with the 100 Island Challenge at Scripps Institution of Oceanography to map coral reefs using underwater photography. This process, called photogrammetry, involves a scuba diver taking thousands of overlapping photos of the reef from different angles and has significantly reduced the time it takes to monitor a reef.

If you know the distance from the subject, the angle, and can find common points between the overlapping images, the photos can be stitched together to produce a 3D reconstruction of the reef.

The 3D models are exported into 2D representations called orthomosaics and these are used to track changes in individual corals over time. By sampling across the orthomosaics, we can measure how the corals are changing at a large spatial scale and we are able to draw conclusions about the reef-wide response to increased ocean temperature.

NOAA and several partners have been working since 2013 to create orthomosaics at coral reefs around Hawaii. I am using these orthomosaics to assess the effects of thermal stress on coral demographics. Specifically, I will measure how thermal stress events affect the growth, survival, and reproduction of six species of coral in the Hawaiian Islands. Studying how thermal stress affects corals will help us better understand corals’ response to bleaching and why some corals are more resilient than others.

This analysis will allow managers to better understand how increased temperature affects corals and identify interventions that could make corals more resilient to climate change. For example, once we are able to identify individual corals that are resistant to increasing ocean temperatures, managers could artificially propagate the stress-tolerant coral fragments in nurseries and outplant them on degraded reefs.

While we hope that this research will help guide future interventions that will help increase corals’ ability to survive projected temperature increase, coral reefs will continue to decline until we can curb the effects of climate change. There are several proposed intervention strategies that may help in the short-term, but warming from the greenhouse gases we have already emitted is expected to overwhelm most corals’ ability to adapt. Ultimately the reduction and mitigation of greenhouse gas emissions, which are driving increases in ocean temperature, may be the only chance that coral reefs continue to persevere.