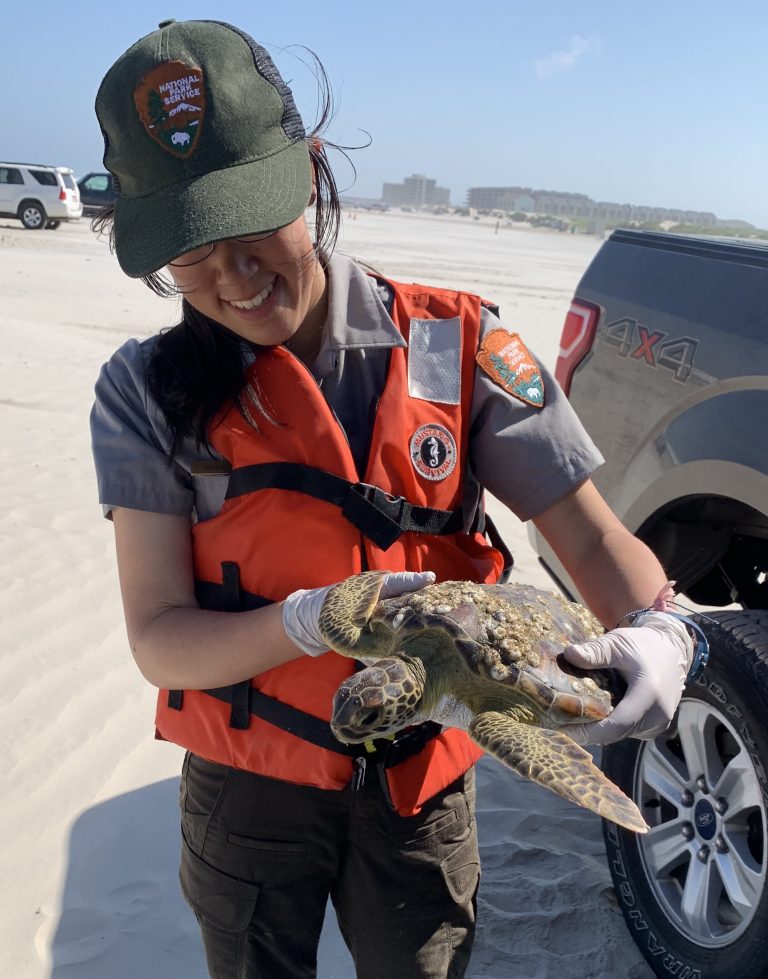 Every October, animal rehabilitation facilities around the northeast gear up for another sea turtle cold stun season. Cold stunning for sea turtles is similar to hypothermia for people, and typically occurs in November and December. As the ocean temperature drops below about 10°C (50°F), a sea turtle’s body shuts down. Since they are cold-blooded, their body temperatures are close to that of the surrounding water. Once they get too cold, sea turtles become lethargic and are no longer able to swim or eat, and end up at the mercy of the currents.

These turtles, usually juveniles, wash up on beaches around Cape Cod, Massachusetts, and Long Island, New York. They can be found traveling up the East Coast with the Gulf Stream and spending their summers feeding in the waters off the coast of New England. As the water cools down, sea turtles should instinctively migrate back south towards Florida and the Caribbean. The problem is that many animals get caught in bays and can’t figure out how to navigate back to the open ocean, eventually succumbing to cold stunning when the water rapidly cools.

Strong winds and waves push some of these hypothermic sea turtles onto the beach, where trained rescuers or members of the public find them. If found early enough, many of these stranded sea turtles can be rehabilitated and released back into warmer waters. By tracking the annual regularity of these events, rescuers have been learning how to predict times with the highest chance of stranding (usually after high tide and on days with strong northerly winds). Researchers have also made models that predict cold stunning numbers will increase over time.

Historically, an average of around 90 live stranded animals have been rescued and treated on Cape Cod each year, but that average has risen to more than 300 animals per year in the last decade. Higher cold stunning years have overlapped with warmer sea surface temperatures in the late fall, a trend that will likely continue. This means sea turtle cold stunning numbers will continue increasing, and it’s predicted that thousands of turtles may strand annually in the not so distant future unless the rate of ocean warming slows or reverses.

Interestingly, cold stunning doesn’t occur only in the northeast, but also happens along the southeast in areas that many consider to be consistently warm, such as Florida and Texas. The difference is the type of cold stunning experienced: acute in the south and chronic in the north. Cold snaps around bays and lagoons in the southeast have begun causing yearly cold stun events in recent years, something that used to be pretty rare. Luckily for most sea turtles in the south, they generally only experience a couple days of cold water and can be released as soon as the water warms again. Turtles in the north, however, encounter prolonged exposure to cold water and often develop pneumonia, which requires several months of rehabilitation before they are fully healthy again.

Climate change is causing expansions in habitat and feeding areas and leading to an extension of historic regions. Warmer waters in the Gulf of Maine are causing turtles to spread further north, leading to a greater chance of getting stuck in the hook of Cape Cod Bay during their migration south. Since weather patterns in recent years have also caused the ocean to stay warmer for longer, sea turtles are more likely to delay their southern migration, which could result in more strandings when a cold snap hits and quickly drops the sea temperature. Rescue organizations will continue to save as many animals as possible, but the best scenario for decreasing the number of animals stranding due to cold stunning involves reducing or reversing the effects of climate change.