As a marine biologist, part of my job is to study the behavior of whales and how they interact with their environment. Many projects I am involved in are long-term (40+ years) studies that follow individual whales throughout their lives. Long-term projects allow researchers to document how whales have reacted to changes in their environment in the past and how that affected the population as a whole. These data can help determine how whales are responding to climate change and how their response may affect their long-term survival. 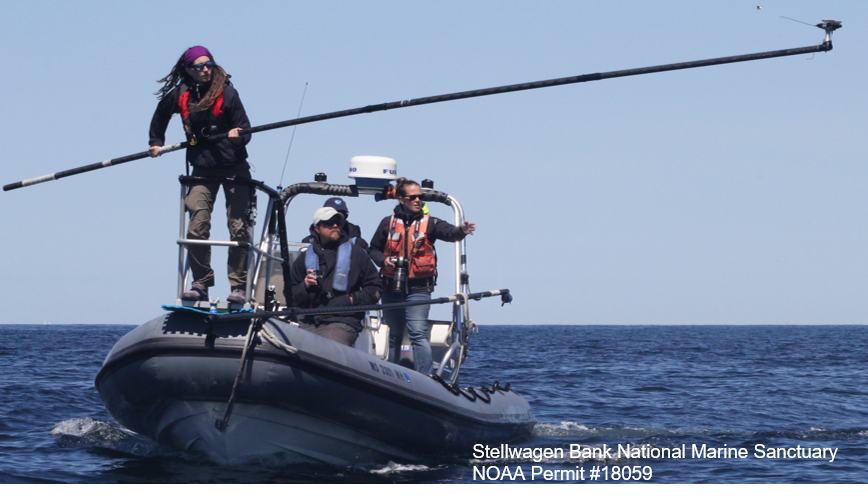 How is climate change affecting whales?

Different types of whales, and even the same species of whales in different location, can be affected by and respond to climate change differently. Whales rely on different food sources, some of them being more flexible eaters than others. Some baleen whales feed on zooplankton (copepods or krill), others feed on small fish like anchovies, herring, and sand lance, while others can switch back and forth between both food types. A species that can choose between multiple types of food may have a better chance of surviving rapid changes in its environment than a species that can only eat one type of food. However, some species, like humpback whales, may feed on various prey items as a species, but it appears that individual whales specialize in a particular prey species in different locations. For example, in the Gulf of Maine, after the herring fishery collapsed, humpback whales started feeding on sand lance, and there was a cultural evolution of how the whales fed. A few whales started to slap the surface of the water with their tails before coming up to feed. The behavior is now called lobtail feeding and it is thought to help corral the fish into a tighter ball to help the whale capture more fish in its mouth when lunges through the school of fish.

Even though humpback whales are found throughout the world’s oceans, lobtail feeding hasn’t been seen anywhere else, and even within the Gulf of Maine population only about half of the whales use this newer feeding method. The fact that humpback whales can adapt to changing prey species is promising for the species as a whole. However, climate change is causing rapid changes in the ocean, so whales may not have enough time to perfect new feeding methods. Alternatively, whales may end up following their primary prey species into areas they previously had not used, which may have additional anthropogenic threats to the whales.

As whales try to deal with a changing environment, there are unforeseen overlaps between whales and humans using the same area at the same time. In the waters off both the east and west coasts of the United States, recent changes in habitat use by whales have increased their risk of entanglement in fishing gear and ship strikes. Off the coast of California, humpback whales are known to forage on krill and anchovies. In 2015, due to warm ocean conditions, there was less krill than normal, so more whales were feeding on anchovies and the fish happened to be very abundant close to the shore, especially in Monterey Bay. Unfortunately, the Dungeness crab fishery season had been delayed because of domoic acid (also known as red tide) and therefore there was an abundance of crab gear in Monterey Bay, while there was a huge number of humpback whales chasing after the anchovies in the bay.  This unexpected overlap of whale and human use caused the highest rate of humpback whale entanglements in California ever recorded.

After this initial peak of entanglements, researchers, the Dungeness crab fishery, government agencies, and non-profits have joined forces to reduce the risk of entanglement to whales off the West Coast. Now, oceanographic conditions, whale abundance, and their locations are being monitored and assessed throughout the fishing season to determine if the fishery should be delayed or suspended while a large number of whales are seen in the area. This is a fluid management plan that will hopefully reduce the number of entanglements but is not an end-all solution. We are still working on a solution (like ropeless fishing gear) to prevent whales from getting entangled while still allowing the fishing industry to continue fishing and meet the demands of us, the consumer.

Similarly, on the East Coast during the summer of 2018 North Atlantic right whales (a highly endangered species with only about 400 individuals left) unexpectedly showed up in the Gulf of St. Lawrence in Canada.  In recent history, right whales were not known to use this area, as they normally feed on copepod, Calanus finmarchicus, in the Bay of Fundy during the summer months. However, the abundance of Calanus started to decrease in the Bay of Fundy a few years prior, due to the warming of the water in the Gulf of Maine, and the whales had to find a new feeding ground. This shift in North Atlantic right whale habitat caused many of them to be killed by entanglement in fishing gear and ship strikes. The overlap of right whales with the crab fishery and the heavily used shipping lanes was unexpected and therefore there was no management in place to help the whales.

In areas that were known to be used by right whales, people had spent years to come up with methods to reduce entanglements through fishing gear modifications or area restrictions, as well as speed restrictions and methods to acoustically detect whales and warn cargo ships when whales were in the shipping lanes. All of these management methods took years of research and people from government organizations, fisheries, shipping companies, researchers, and non-profits to work together to come up with the best methods to help save the whales without hindering industry too much. But with the environment changing so rapidly, it is hard for researchers to predict where these whales will move next, let alone all of the additional threats they may encounter in their new habitat.

Unlike myself, it is not the daily decisions whales make or the pressure they put on industry to push for better environmental practices. Whales just need to live their everyday life and they end up helping to combat our poor choices. Whales can forage throughout the water column and even along the ocean floor (depending on the depth of the water). After they eat, just like us, they need to poop. The nutrients they don’t absorb they release back into the water column, including near the surface where the increased levels of nutrients can cause phytoplankton production to increase. Just like fertilizing your lawn, the whales fertilize the ocean to increase primary productivity (similar to plant growth). Just like plants, phytoplankton use sunlight, nutrients, and carbon dioxide to grow and produce oxygen. So not only to whales increase the amount of food available in the ocean, the increased amount of phytoplankton increases the carbon uptake by the ocean. The carbon is passed through the food web and as organisms die, they sink to the bottom of the ocean where carbon can be stored for 100’s or 1000’s of years. So, whales play an important role in the carbon cycle, but they are not the solution.

Some people have tried to place a price tag on whales so people can better understand how important whales are to the environment and economy. However, no matter how many whales there are in the world, they are not able to undo the damage we have already done and will continue to do. That is up to us to rectify and ensure the survival of these giants as well as life as we know it.