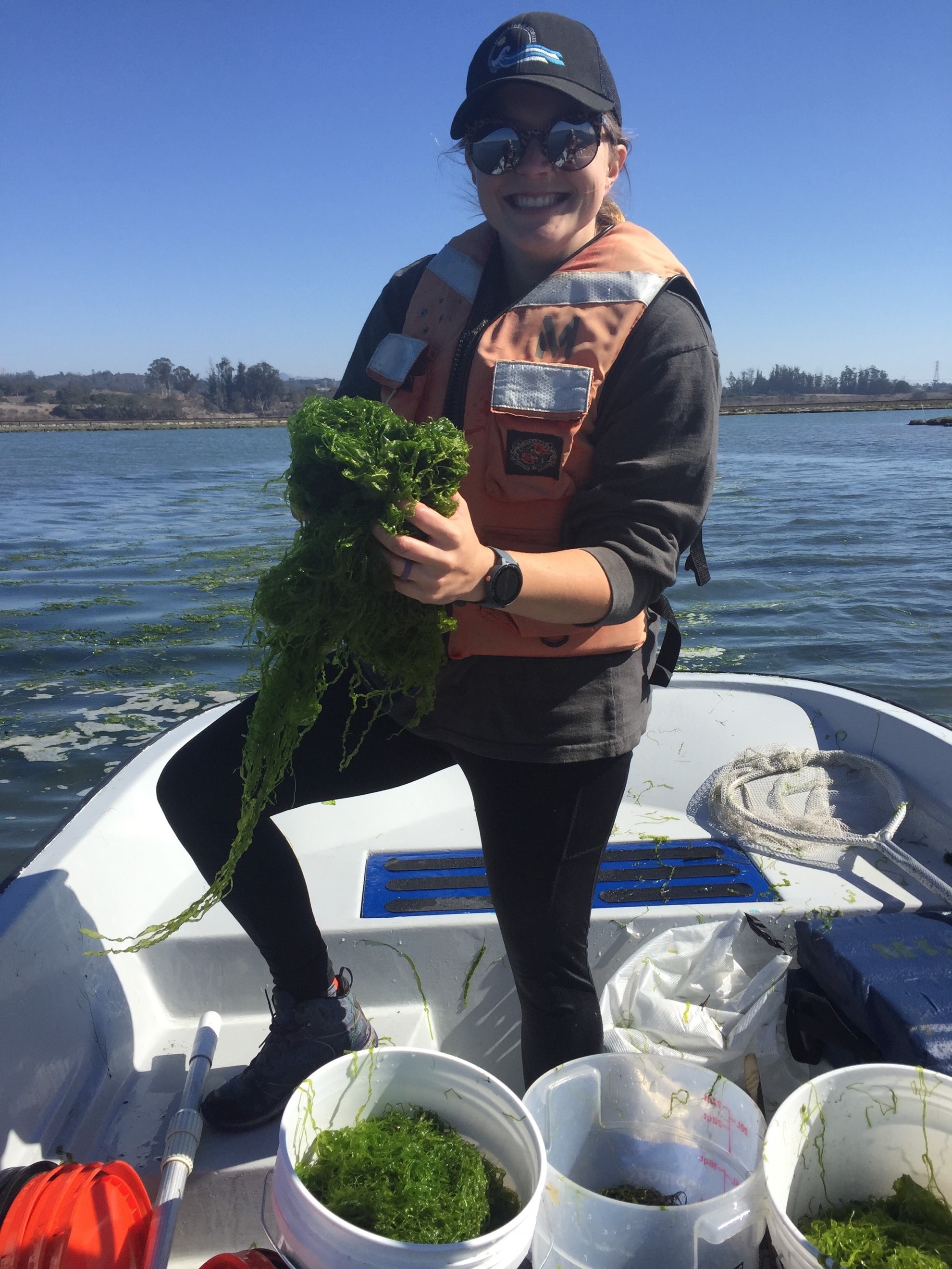 It is generally well known that our planet’s fossil fuel reserves are being used up at an alarming rate. Recent studies suggest that we should transition to using renewable energy by 2030 to ensure a smooth switch from fossil fuel dependence [1].

What isn’t as well known is that the answer to producing clean, sustainable energy is closer than we think. In fact, if you live in the area of Elkhorn Slough you might see the solution as you drive over the HWY 1 bridge and notice the water is covered in a green carpet.

That green carpet is actually a type of green algae called Ulva. Large dense blooms can have some serious negative impacts on our slough. As the bloom grows it smothers the water and causes oxygen levels to plummet. When oxygen levels drop too low the water become uninhabitable. Many species use the slough as a nursery, feeding and resting site, and if the water is compromised, they may not be able to utilize the habitat in the ways they need.

One of the primary reasons Ulva blooms in such large quantities is called eutrophication. Eutrophication is what happens when there are too many nutrients in a body of water. In the case of Elkhorn Slough, the primary source of eutrophication is agricultural runoff. That runoff is loaded with excess nutrients from fertilizer -- primarily nitrogen and phosphorus -- and all those nutrients promote large blooms of Ulva.

So, why does this any of this matter? I thought we were talking about creating clean energy and then you bring up algae and eutrophication. As it turns out, they’re all connected. Let me walk you through my thesis project!

Now that you’re familiar with the issues, let’s get in to some solutions. We can remove Ulva from sensitive areas of Elkhorn Slough and convert it to clean energy in the form of biohydrogen via a process called anaerobic fermentation.

Anaerobic fermentation is a metabolic process, performed by anaerobic bacteria, that converts sugar and carbohydrates into alcohol, acid or gas. During photosynthesis, Ulva removes carbon dioxide from the atmosphere and uses it to create carbohydrates as an energy source. We can use Ulva as food for the bacteria during the fermentation process.

Additionally, if we are selective with our microbes, we can choose to produce hydrogen as the final product! This is because different microbes have certain ways they go about breaking down food.

Hydrogen is one of many types of renewable energy. When hydrogen is burned the only byproducts are water and heat. So unlike fossil fuels, it does not release any carbon dioxide into the atmosphere. And remember, during photosynthesis algae removes carbon dioxide from the air, so this entire process is a carbon sink! During my trials, Ulva has shown remarkable potential as a starting source of biomass, producing around 10 liters of hydrogen per 500 grams of algae.

But, what about the eutrophic conditions in the slough? Even if we remove the algae, agriculture runoff is still going to promote more growth. We want to produce clean energy and preserve our ecosystem.

So, we need to make efforts to reassess our local fertilizer use and decrease agricultural runoff. Luckily for us, fermenting Ulva actually produces a wonderful liquid biofertilizer in addition to the biofuel. Biofertilizers differ from traditional chemical fertilizers because they contain living microorganisms that improve soil health and fertility.

The anaerobic bacteria that we used during our fermentation is an outstanding little microbe that has the ability to fix nitrogen. That means that once applied to soil it will make atmospheric nitrogen available to plants without the aid of chemicals. Crops treated with biofertilizers often have higher yield, better health, and most importantly retain more nutrients than crops treated with chemical fertilizers [2]. If the runoff from agriculture is less concentrated, we may be able to manage the impacts of eutrophication more easily.

If we are able to lessen agricultural runoff, we may experience less intense blooms of  Ulva. But fear not, we will still have enough Ulva to use as food for fermentation thanks to aquaculture. Aquaculture can consistently provide enough Ulva for fermentation, especially as we move towards commercial production.

Through one process we are able to address global issues regarding energy demands and local issues dealing with habitat conservation. Now that’s a lot to think about while you’re driving over the HWY 1 bridge!