The Chemical Oceanography and MPSL labs set out on their latest cruise this past summer in hopes of bolstering and expanding their search to answer the question:  how is monomethylmercury (MMHg) transported into coastal marine fog? For those who missed our first post, a quick review:

MMHg is a neurotoxic form of mercury (Hg) recently discovered in marine advective fog along the central Californian Coast at trace levels, yet still 100 times higher than that of rain. Naturally, monomethylmercury is the byproduct of cellular metabolism in certain anaerobic bacteria; created (or methylated) from available elemental Hg. Oxygen minimum zones in the ocean also show increased levels of MMHg, suggesting its production occurs within microenvironments in these zones. In other words, it’s possible that bacteria that make their living in the anoxic depths of the ocean may be pumping out MMHg from any available elemental Hg in seawater. Elemental Hg (the kind found in old thermometers) is widespread and found globally in trace amounts. Volcanoes and other geologic venting were the main contributors of elemental and reactive forms of Hg to the atmosphere before the Industrial Revolution. Since then, global atmospheric levels of Hg have more than quadrupled. Anthropogenic sources of Hg are responsible for most Hg poisonings worldwide. One event, involving MMHg in waste discharge from a chemical plant, led to thousands of deaths in the small Japanese fishing town of Minamata. This event in the 1950’s, led to elevating global awareness of MMHg pollution. “Minamata’s Disease” is now a term used to describe the symptoms associated with the degradation of the body’s nervous system as a result of high MMHg toxicity. In case you are wondering, these symptoms include:

MMHg is lipid-soluble, meaning it can enter tissue membranes and accumulate in organisms that take it up.  This is how a chemical plant’s refuse contaminated Minamata’s local seafood populations, yet this process of biomagnification also occurs naturally.  The EPA has suggested moderating consumption of certain fish species of higher trophic levels (upper food chain) and water-filtering organisms (mussels) for a few decades now. Increased atmospheric deposition of Hg from increased industrial activity contributes to the growing Hg levels in seawater, which could potentially expose the global population to MMHg contaminated seafood. 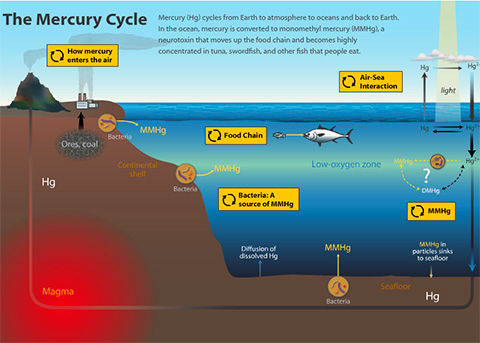 So how does this MMHg we normally see in anoxic (no oxygen) mud bacteria end up in the ocean and then coastal fog?

There are a few suspects in this investigation...

Plankton is prolific in the ocean, and one of the first likely steps for MMHg bioaccumulation into the food web. The genes hgcA and hgcB responsible for methylation in known methylating bacteria (typically sulfate reducing) can be compared to observed plankton species to see if they are genetically capable of producing and excreting MMHg as well. If methylating plankton are identified, then Hg enriched incubations can confirm which species are methylating in the water column, a “Who’s who in the zoo”.

The interface between air and sea is a place of biogeochemical shenanigans, where phase changes and aerosol production play a major role in the creation and cycling of organic/inorganic matter and pollutants. This sea surface microlayer (SML) is ~50-100 microns thick, and a zone where insoluble material accumulates, often concentrating trace materials and contaminants. It is from this layer that MMHg may also accumulate, and eventually be vaulted into the atmosphere by wave action, where it would then become the MMHg signal we detect in the fog.

The Chemical Oceanography Lab will be discussing their latest results with other fog researchers as part of a group called FogNet. Here they will examine their data in the context of fog dynamics along the California Coast. Check out some pictures and stay tuned!