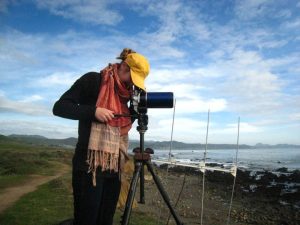 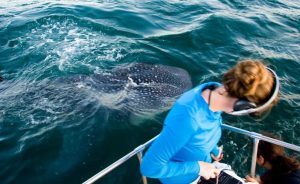 My interests in ecology began at a young age as I interned with the Lawrence Hall of Science and Berkeley Botanical Garden, teaching youth biology classes. I took a more marine focus as a student at UC Santa Cruz (UCSC) where I joined the Sea Otter Research and Conservation program (SORAC), partnering with UCSC, US Geological Service, and the Monterey Bay Aquarium. After receiving my Bachelor of Science in Ecology and Evolution, I continued with SORAC and pursued a career with the California Department of Fish and Wildlife. For six years I performed field-work and developed the photography catalogue for the long-term diversity database of Northern California.

During this time I was fortunate to live and work abroad. I assisted with a variety of research programs including whale shark photo identification in Bahia de los Angeles, Mexico, and participate in Wildland Studies Program of CSU Monterey Bay throughout the country of Belize. I am thrilled to be a member of Dr. Gitte McDonald’s Vertebrate Ecology Lab at Moss Landing Marine Laboratories, and am interested in the use and development of remote monitoring systems to better understand marine vertebrate behavior and physiology. For my thesis I worked with Sea Otter Savvy to assess the energetic cost of human disturbance on the southern sea otter.

Heather defended her thesis titled "The energetic cost of anthropogenic disturbance on the Southern sea otter (Enhydra lutris nereis)" in 2019. You can read her thesis manuscript here. 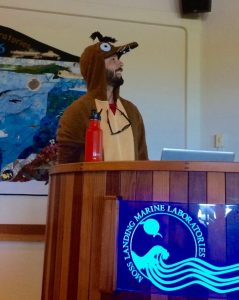 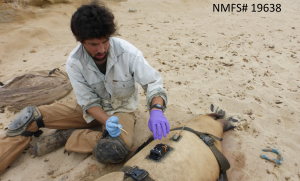 I graduated from UC San Diego in 2010 with a degree in General Biology (physiology focus) on a pre-med track. I soon decided I liked ecology more than people biology, and set out to South America with a one-way ticket and almost no plan. 1.5 years and my full savings account later, I returned to the US via many buses, taxis, and a couple planes, and sporting a handful of conservation/biology experiences. A few outdoor education and field biology jobs led me to pursue my own career in marine biology (particularly concerning large predators), and in 2014 I began an internship in this lab.

For my Master’s thesis, I am investigating the underwater movement and foraging patterns of wild California sea lions. I am approaching this goal from two angles. First, I am working with trained sea lions at SLEWTHS (here in Moss Landing) to understand how accelerometers can be used to identify when sea lions make feeding attempts.This study will provide a method by which researchers can figure out where, in a dive, wild sea lions catch prey.Second, I am analyzing movement, energy expenditure, and foraging data from wild California sea lions at San Nicolas Island, CA. The idea here is to get high-quality instantaneous measurements of metabolic energy expenditure from movement data (acceleration, magnetic compass bearing, rotational velocity) recorded by a small animal-borne datalogger. I hope this research will improve our understanding of sea lions’ underwater movements and foraging patterns, and how these patterns relate to energy expenditure during foraging trips to sea.

My interest in ecology is broad and I enjoy working with a diversity of organisms, both terrestrial and marine. I began my Master of Science at Moss Landing Marine Laboratory in Fall 2014.  As a graduate student, my research has focused on the interrelations between the local prey community, foraging effort and the ability to produce young for Common Murre nesting at Castle Rock National Wildlife Refuge over the last decade. This island is one of the largest seabird breeding colonies in the Pacific Ocean south of Alaska and is in an area of the California Current System where seabirds have rarely been studied.

Since 2009, I have supervised all aspects of seabird research at Castle Rock and have been fortunate enough to focus on an aspect of this larger project for my thesis project. Preliminary analyses show that Castle Rock is unique relative to other breeding colonies in the California Current System; the diet of murres nesting at here differs from other locations and murre behaviors suggest it is challenging to obtain adequate food to raise young. 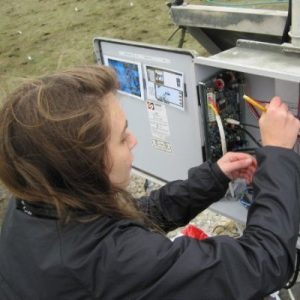 Access to the island is prohibited while seabirds are nesting and, to make detailed observations, I rely on a unique system of remotely operated cameras that are broadcast to the mainland using wireless technologies. You can watch live video of seabirds nesting at Castle Rock 24 hours per day during the breeding season (April to August)

Although I have dedicated a majority of my time to Castle Rock over the last decade, I have also assisted with various wildlife projects at Humboldt State University, Humboldt Bay National Wildlife Refuge, and H.T. Harvey & Associates Ecological Consultants.

Stephanie defended her master's thesis titled "Reproductive performance, foraging effort, and diet of an apex predator, the common murre, at one of the largest nesting colonies in the California Current System" in 2018. You can read her thesis manuscript here. 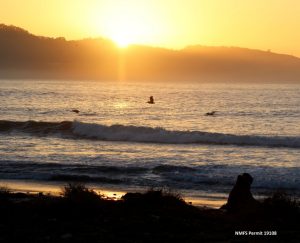 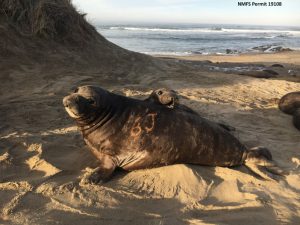 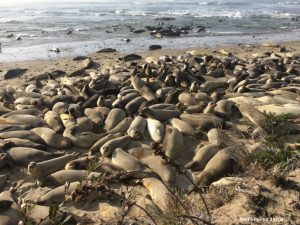