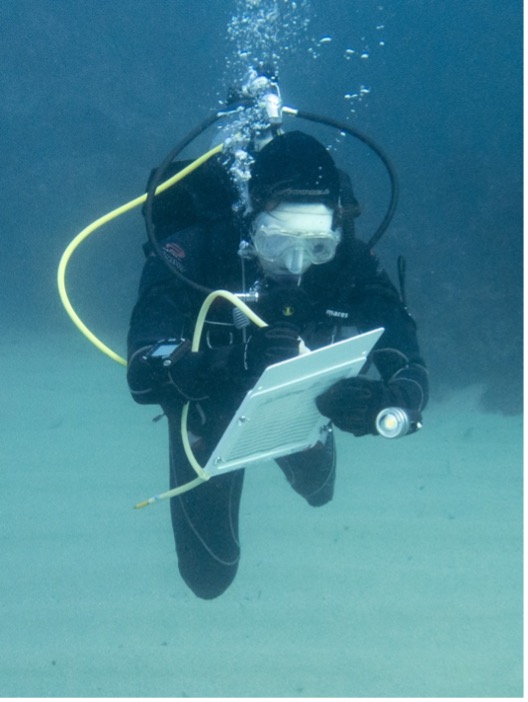 Our pursuit for statistical power involves repeated trials and non-trivial sample sizes.  After hundreds of fish dissections or thousands of water samples, big data can become a big chore.  Once exciting field observations are converted to numbers, I find myself occasionally forgetting the amazing individuals we are fortunate enough to study.

I’ve enjoyed photographing both fish and birds for a few years.  Through repeat encounters, I’ve come to recognize specific individuals both on land and on sea.  If you have had the same experience, you will understand the excitement in recognizing these individuals time and time again.  Sexual dimorphism, unique behaviors, and physical markings are all indicators that can be used for identifications.  Here, I provide small anecdotes about some of the individuals I’ve met through my photography.

I just logged my 400th dive in my SCUBA career.  A majority were around the Monterey Peninsula, most being in the Carmel Bay.  While studying microhabitat associations of Kelp rockfish in Carmel, I recorded more than 1,000 observations of the species.  Kelp rockfish display a wide range of color morphs and patchiness patterns, from a ghostly white to earthy greens and browns.  I recognized this specific individual across a few dives due to the distinct white scar its left side.  After an hour of deep depths and freezing temperatures, it was exciting to find this fish hanging around the same patches of kelp.  I’m not sure if the feeling was mutual! 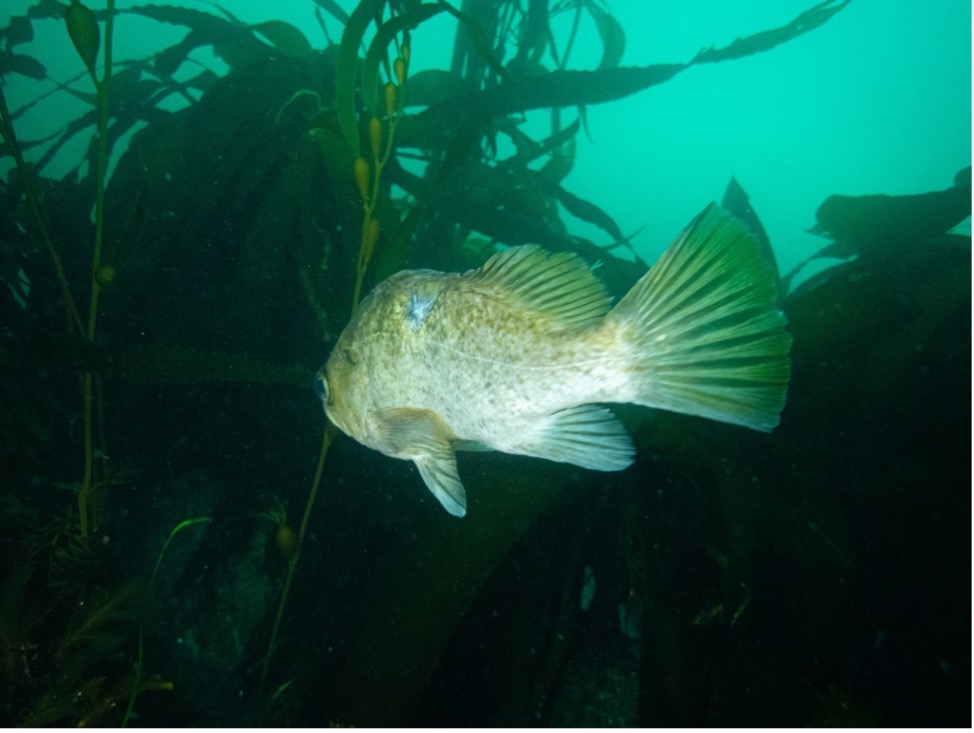 Just across the bay live two large Vermilion rockfish.  The smaller of the two is much more orange, while the larger one has more complicated silver patches on its body.  These large, vibrant rockfish stand out from the other species on the reef.  When I dove nearly every day during the summer of 2018, I would see these individuals in almost the exact same places.  Because of their large size, I believe these two individuals could have easily outcompeted other rockfish for the best crevices along the rocky reef.  Since 2018, this kelp forest has turned into an urchin barren with only a few opportunistic Macrocystis and Nereocystis fronds remaining.  Yet the Vermilions remain – I just saw one of them last week!  It still feels as if these two fish purposefully come out to greet me on dives. 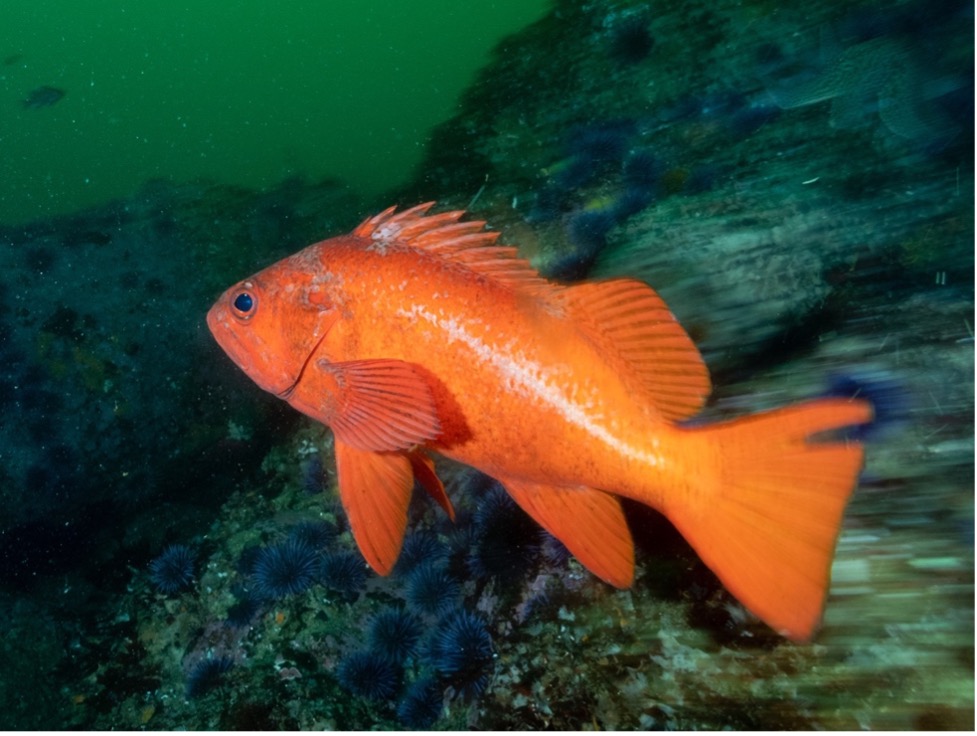 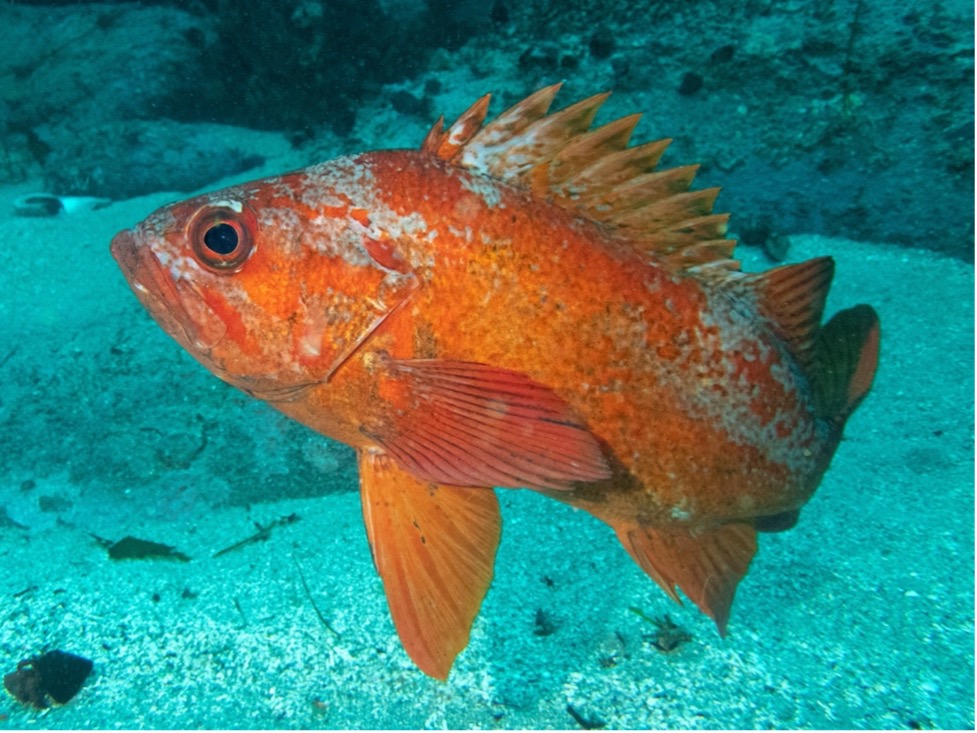 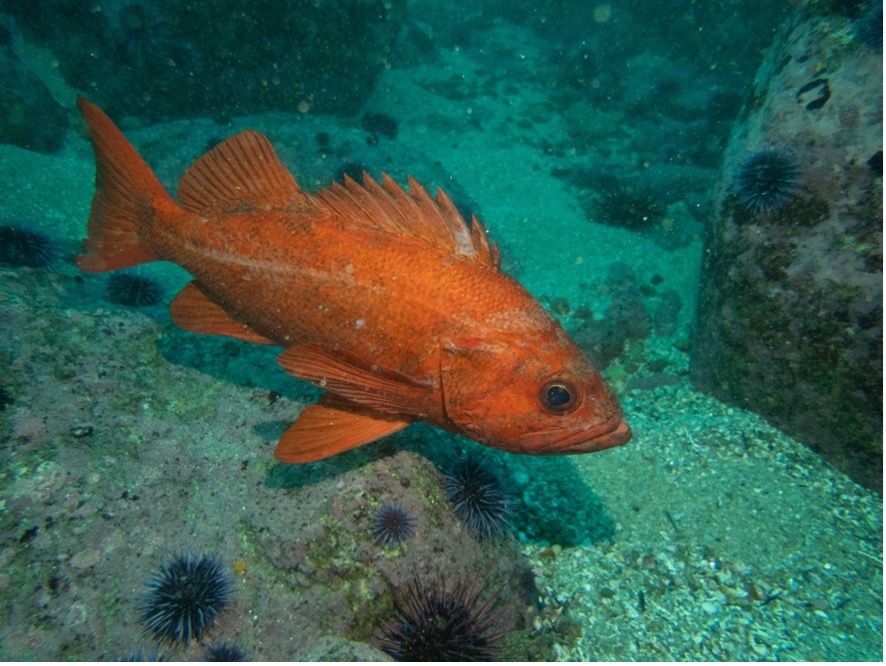 During runs, I’ve passed this White-tailed numerous times while it was perched on the same tree.  I’ve made it a mission to return with camera gear and try to photograph it, but have only succeeded twice.  Their bright red eyes have always fascinated me.  If my presence doesn’t scare it off, turkey vultures and crows seem to always chase it away.

I discovered this Anna’s hummingbird at a location I frequent weekly for shorebirds.  This individual favors flying back and forth between three perches.  It was shy when I first discovered it, not letting me approach very closely.  I began using my camera’s electronic shutter to shoot silently and minimize disturbance on its natural behavior.  After many weeks of returning to this individual, it has become more comfortable with my camera gear.  It now lets me move closer and will even return to me after flying away.  Over a the past few months, this bird has become a part of my weekly photographic routine; I like to think that I am a part of its week as well! 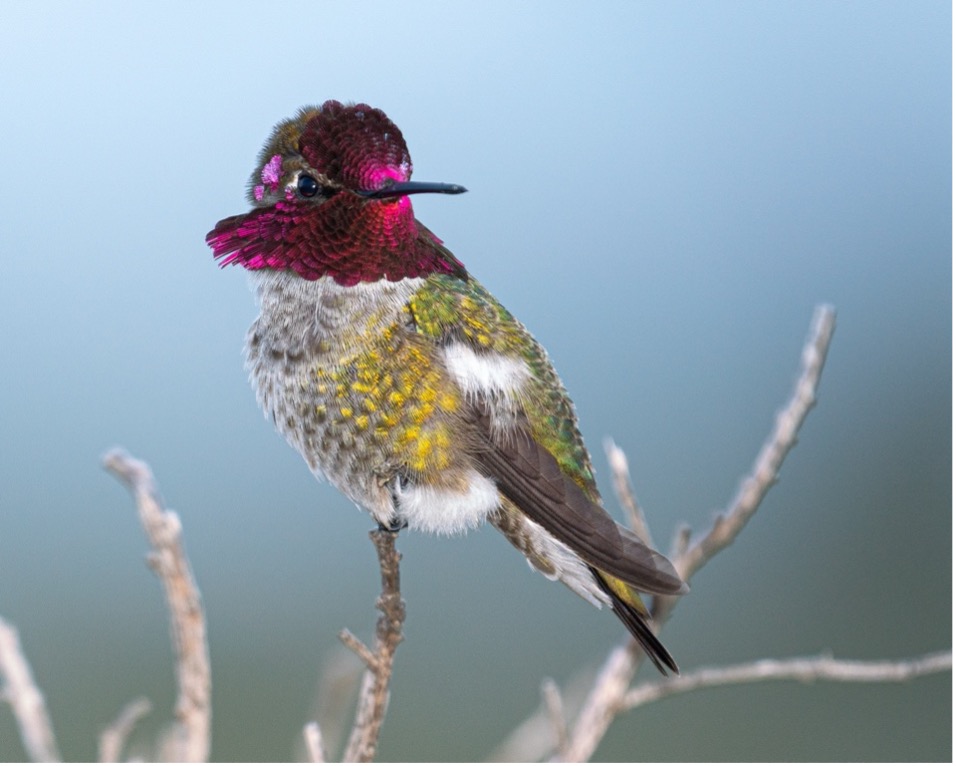 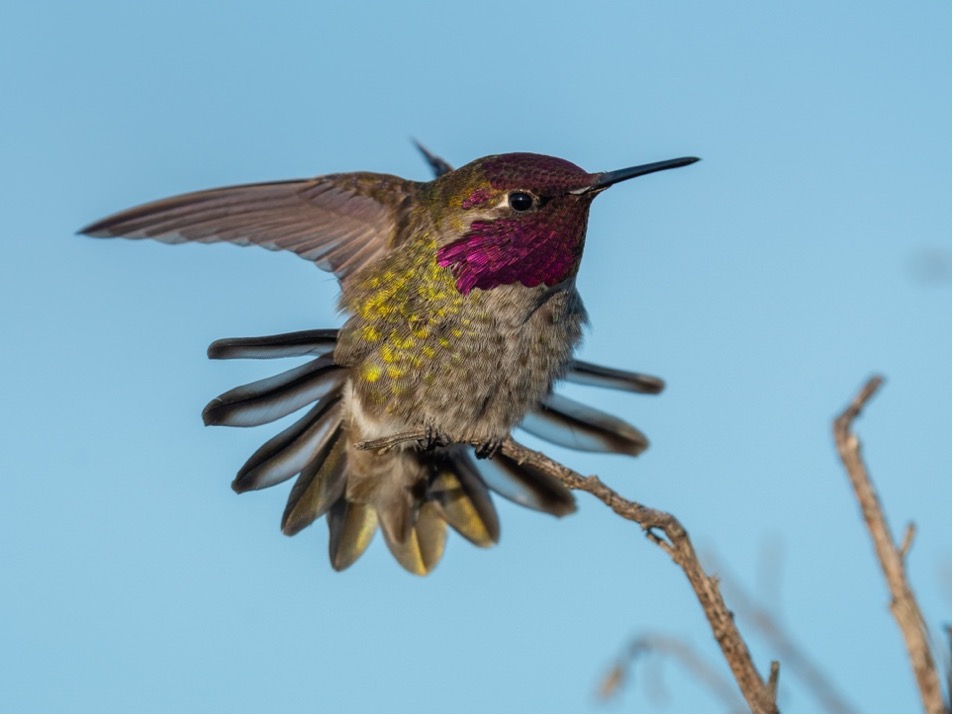 Not far from the hummingbird I visit, two Eurasian collared doves that have claimed a tree as their own.  These two are inseparable.  Although I am no dove expert, I suspect they may be a breeding pair.  Since their tree is near the busy Moss Landing harbor, they sometimes have to other flying fauna.  In my opinion, these goofy doves have one of the most hilarious calls.  Unfortunately they are hesitant to drop down at eye level, which makes it difficult to capture photos. 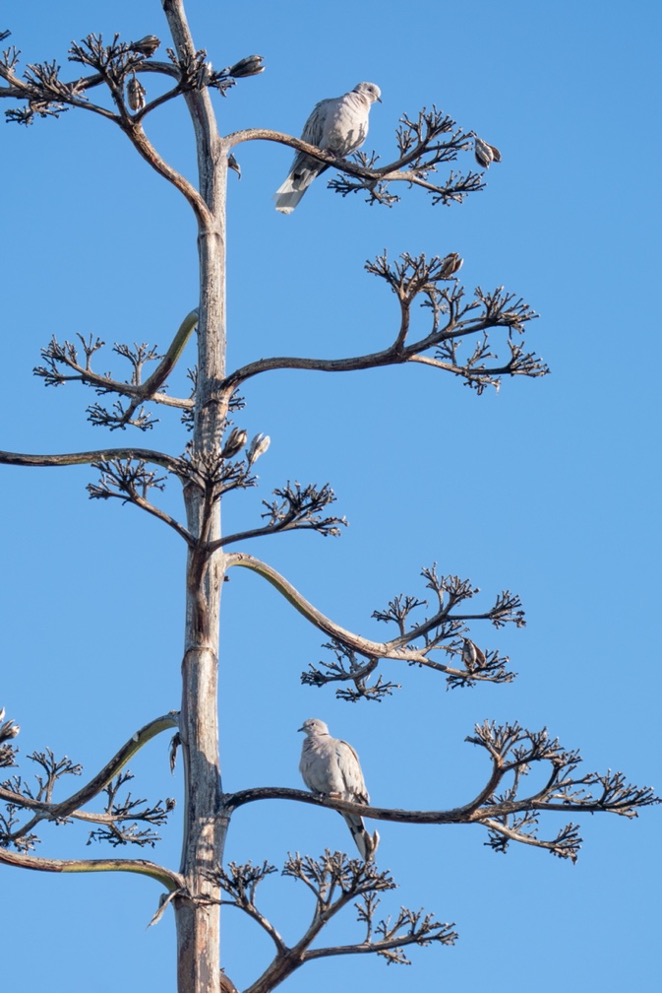 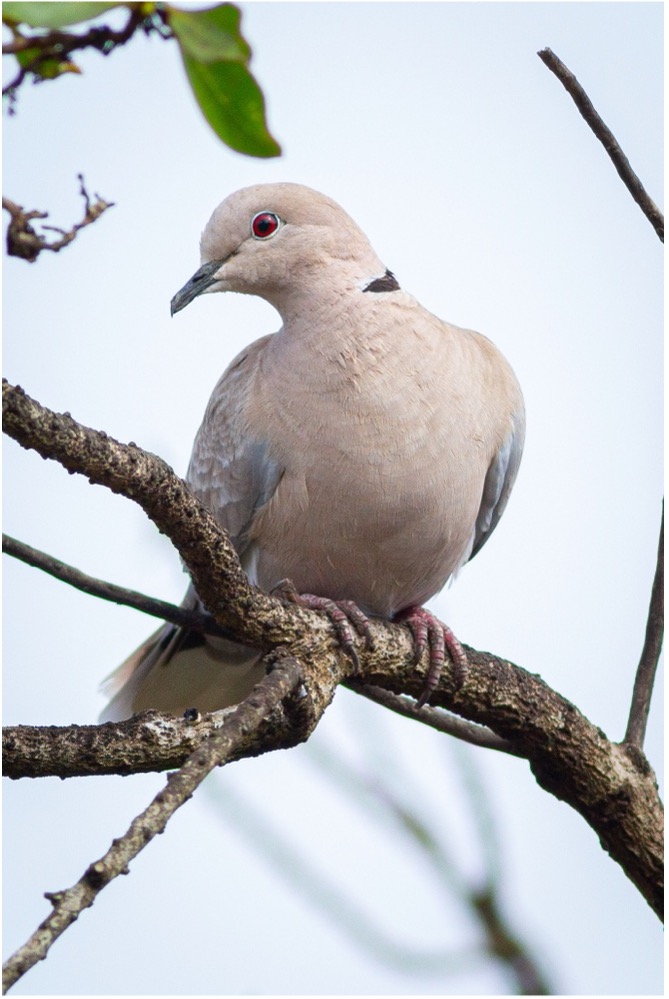 Photographing wildlife is an enjoyable break from the hard science I feel is prioritized during grad school.  These small encounters have highlighted some of the interesting routines and personality traits of my subjects.  I hope you are able to recognize individuals across your scientific endeavors.  Happy research!