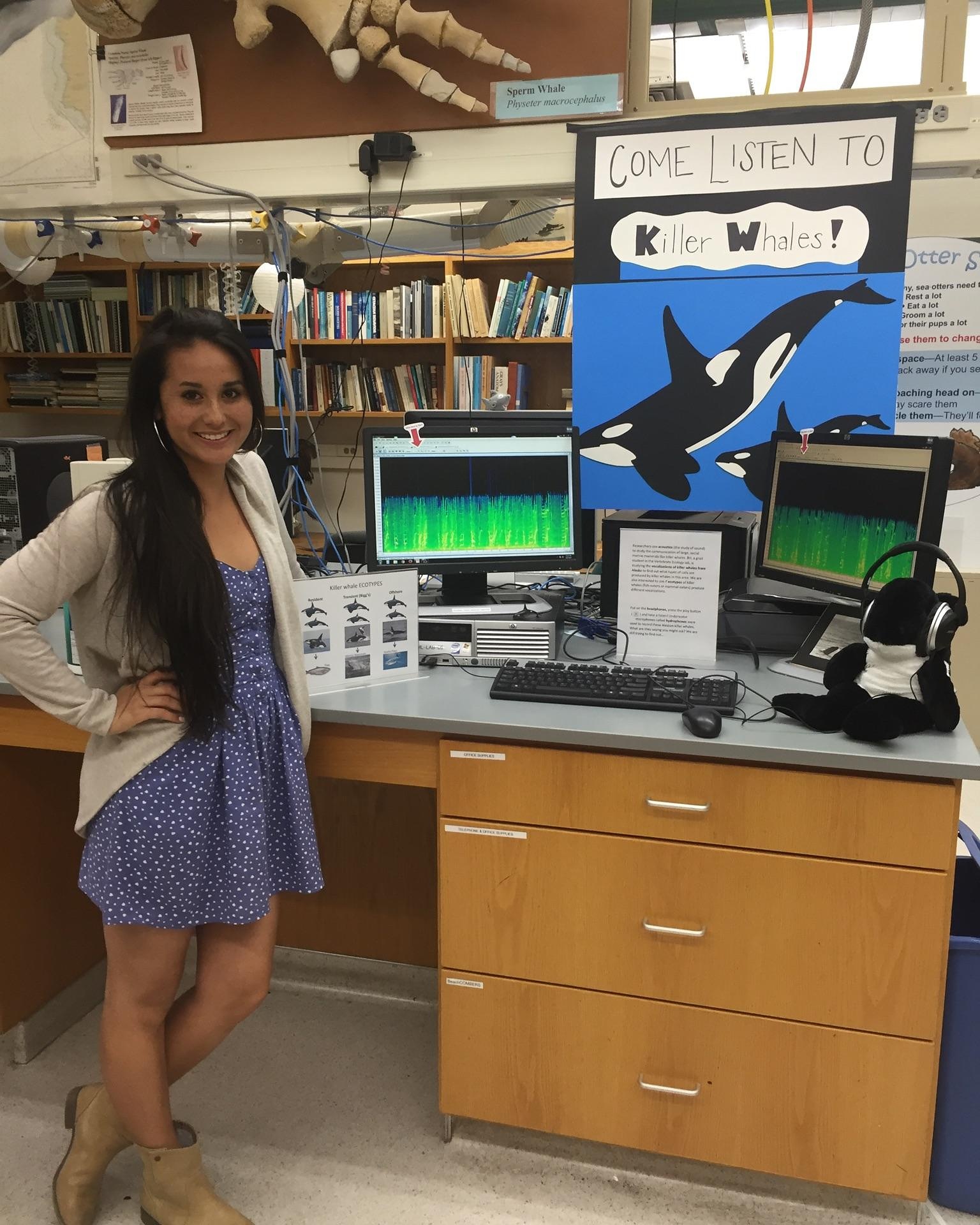 Tagging marine mammals is a highly difficult procedure and a skill that requires extreme finesse from scientists. Due to the high speeds that large baleen whales travel and the short amount of time their dorsal side is exposed at the surface, it requires a quick deployment and impeccable timing. When a whale is at the surface, it usually comes up for a few breathes before diving down. Therefore, there are only a few moments when tagging is possible. Being able to participate in such fieldwork was very exciting for a group of MLML students. This April, students in MS 211: Ecology of Marine Turtle, Birds and Mammals had the opportunity to aid Dave Cade in his research in Monterey Bay.

We departed on the John Martin early on a clear, sunny morning. Our role that day was as the support boat for the tagging boat, the Musculus. Aboard the Musculus was a small tagging team comprised of Dave, the tagger, and John Calambokidis, the boat driver. John Calambokidis, a research biologist and founder of the Cascadia Research Collective, is one of the world’s most experienced whale researchers. The Musculus remained in close proximity to the Martin as the support vessel and we maintained corresponded with the tagging team as the day proceeded.

We scanned the horizon for any blows to indicate the whale’s presence. Alas… there she blows!!! Once a whale was spotted, the Martin traveled towards the animal to see if it was a potential tagging candidate. A group of students were situated at the top deck of the boat with the best view in order to take photos for photo identification purposes. Pictures taken were compared to photos in a photo identification guide of known humpback whales in the Bay. Students were able to compare identifying features like dorsal fin shape and flukes patterns to identify specific individuals. Detailed notes were recorded on number of whales in the area, distance between whales and the boat and tag information. Although we were constantly on alert for whales, the students on the support boat had various roles. A few students ran the echosounder, an instrument that uses sonar to determine depth and produced pings at three frequency ranges in order to map the prey within the water column. Once a whale was found, the Martin traveled in small and large square shape tracks around the whale, echosounder pinging continuously, in order to map prey in the area around the whale. During the day, we had the opportunity to witness the tagging process from a distance. As a whale surfaces, the boat must be positioned in a precise manner and approach the whale at a fast-enough speed to come alongside the whale parallel for the tagger to place the suction cup tag on an animal the size of a school bus. As the whale surfaced, the boat sped up to get in line with the whale. The tagger extended the pole with the tag attached to the end and…WHOMP! The tag hit the whales skin and detached from the pole. The suction cups on the bottom of the neon colored tag kept it adhered to the whale’s back. Success!! Once the tags were on the animals, students used telemetry to find the tagged animal. The tags emitted a ping at a specific frequency which the telemetry instruments could detect. With arm extended, students would move the instrument 360 degrees to hear beeps. When the beeping got louder, this indicated the presence and directionality of the tag. At the end of the cruise, CTD deployments were also conducted to collect salinity, temperature, and dissolved oxygen levels. As we headed back to Moss Landing harbor at the end of the afternoon, I think all the students could agree that it was a very fulfilling day. Not only did we contribute to ongoing whale research, but we had the opportunity to aid a fellow graduate student with his PhD work that will yield insightful information about predator-prey dynamics of humpback whales in Monterey Bay. This collaboration between Hopkins Marine Lab not only benefits the Moss Landing students that are able to partake in local research efforts but also gives Hopkins the opportunity to operate out of the Moss Landing harbor and have access to the MLML vessels. Goldbogen lab research is conducted in close collaboration with MLML director, Jim Harvey, and research faculty Alison Stimpert. Dave Cade, a PhD student in the Goldbogen Lab at Stanford, studies predator-prey dynamics of humpback whales and ecosystem ecology in Monterey Bay. The goal of his research is to study the kinematics and success of foraging Humpback whales on different prey types. To do this, he used suction cup tags to collect accelerometer, magnetometer, basic audio and gyroscope data. This is a collaborative project involving researchers from Hopkins Marine Station, Cascadia Research Collective, and Moss Landing Marine Laboratories. This work was completed under permits NMFS permit #20430 and ONMS permit MULTI-2017-07.