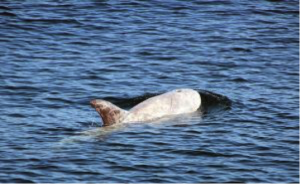 Risso’s dolphins are commonly observed in the Monterey Bay. Despite this, relatively little is known about the population, or about Risso’s dolphins in general (they are listed as data deficient on the IUCN red list). Drs. Birgitte McDonald and Alison Stimpert received funding from the Monterey Bay Chapter of the American Cetacean Society to conduct a study to improve our knowledge of the Monterey Bay Risso’s dolphins. Specifically we will: 1) Investigate whether the population consists of primarily resident or transient groups using photo identification and acoustic techniques. And 2) Examine the social structure of local groups by conducting focal follows of known individuals.