If you've ever visited our lab, you've seen the beautiful waters surrounding us, often bobbing with a variety of marine mammals. The main body of water that surrounds Moss Landing Marine Laboratories is Elkhorn Slough, which is an estuarine embayment that drains into the Monterey Bay.

Elkhorn Slough has evolved greatly in the past few centuries. Since the dredging of Moss Landing Harbor in 1946, the slough has become directly connected and thus heavily influenced by the Monterey Bay. This connection has led the slough to change from a freshwater-influenced estuary to a predominantly saltwater-influenced and erosional body of water. A great deal of research has been done to study how these changes have influenced habitat structure and biological communities in the slough.

My own thesis research will focus on Elkhorn Slough, and how various oceanographic variables have changed and are influencing elasmobranch (shark and ray) populations in the slough. I am hoping that the class will be beneficial in showing me how to measure chemical variables, and analyze values in terms of how they influence biological communities.

Last week, our chemical oceanography class was split into five groups and deployed to various water bodies around our school to take some measurements and water samples. It had just rained earlier that week, so we were hoping there would be some visible differences in salinity and nutrient content in the regions we were sampling. Although the main channel of Elkhorn Slough is heavily influenced by the Monterey Bay, and thus oceanographically similar to the ocean, the upper reaches of the slough are often less saline (depending on the season), and more influenced by precipitation. One group went offshore to Monterey Bay, two groups went into Elkhorn Slough, one drove around to Salinas River, Carneros Creek, and other connected sloughs, and my group sampled in Moss Landing Harbor. 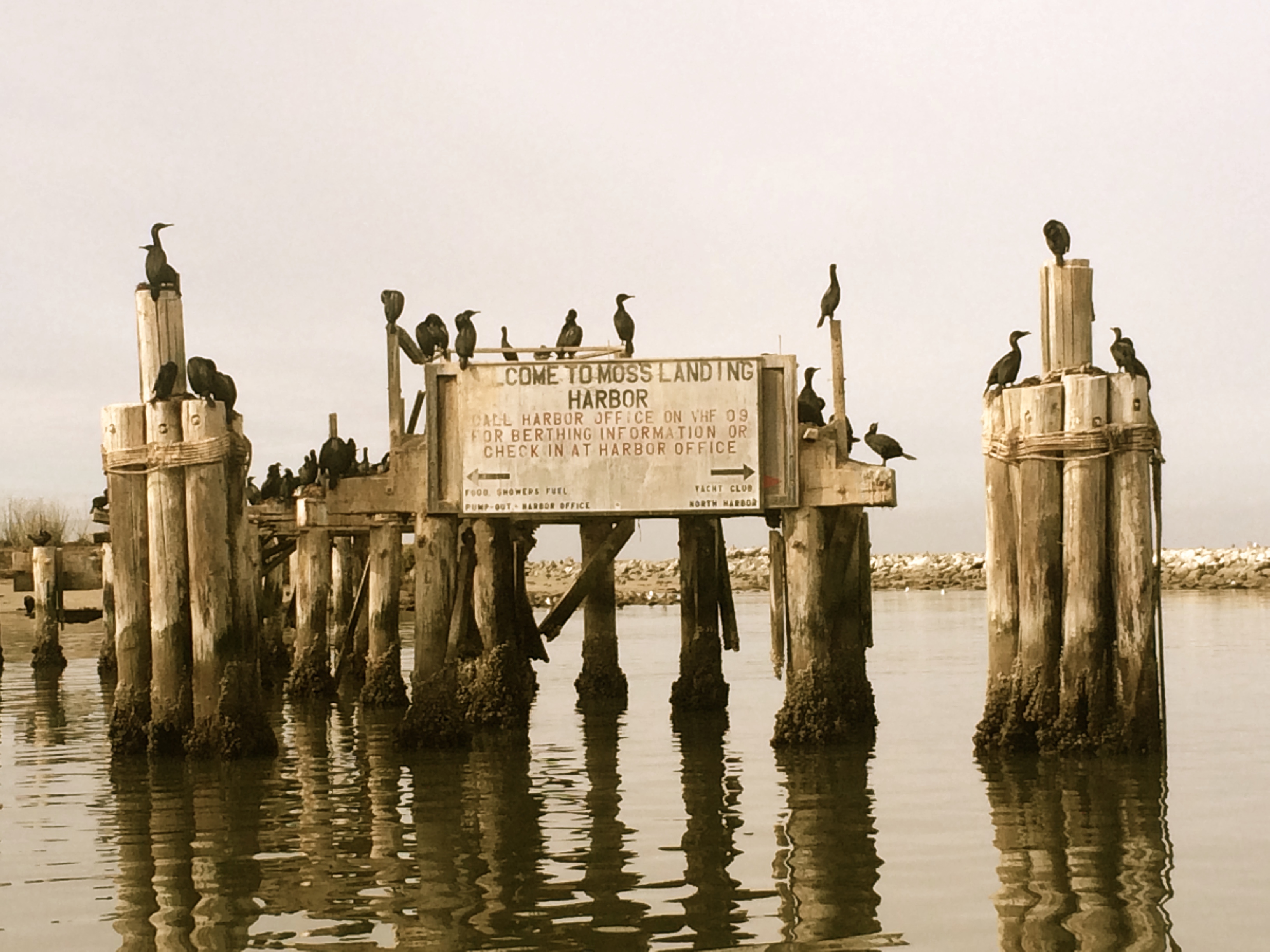 We took one of our school's whalers on a beautiful sunny morning, excited (though some of our facial expressions may not be representative) and ready to sample.

We motored slowly through the harbor, observing sea lions sunning themselves, and being observed by harbor seals and a portly sea otter.

Once at a station, we used the CTD (Conductivity Temperature Depth) to measure salinity, temperature, and pH at eight stations within our region.

We also recorded GPS coordinates, and collected water samples with a syringe, and filtered them into a bottle to bring back to the lab.

Many of the changes to Elkhorn Slough have been anthropogenic, including the construction of levees, dikes, tide gates, salt ponds, and railroads. Some of these were constructed early on for agriculture and ranching, whereas others have been created to remedy erosional problems we have created.  These barriers have altered tidal flow within Elkhorn Slough, and created distinct oceanographic areas. In order to determine differences between these areas, some stations required us to leave the boat to sample adjacent areas that were separated by a barrier.

We passed by the lab, hoped we wouldn't embarrass ourselves in front of the whole lab, and successfully finished our collections near the tide gate leading to the Old Salinas River.

Combined with the rest of the teams, we now have oceanographic measurements and water samples all around Elkhorn Slough and the surrounding bodies of water. Over the course of the semester, we will learn how to measure phosphate, nitrite/ nitrate, oxygen, silicate, and alkalinity of the water samples. The measurements will tell us something about how how the stations differ from each other, how Elkhorn Slough is partitioned, and the outside influences to each station.

As marine scientists, many of us spend a substantial chunk of time in the field. While field work can be frustrating and tiring, on a beautiful day like this, encountering a multitude of wildlife and puttering slowly through the beautiful waters, it is easy to remember why we went into the field of marine science.

Last week, students from the Chemical Oceanography class took advantage of many of the resources at Moss Landing Marine Labs to perform an analysis of dissolved oxygen throughout the seawater intake system.  The system supplies seawater from offshore to the MLML aquarium (up on “the hill,” at the main campus of the lab), the live tanks at Phil’s Fish Market, MBARI’s Test Tank, and to SLEWTHS. 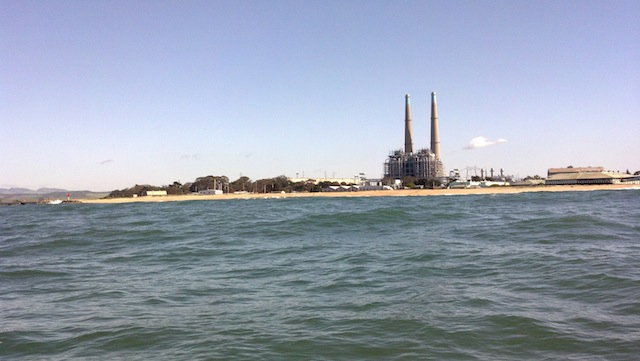 For the first stop of the day, students Kristin Walovich and Ashley Wheeler joined professor Kenneth Coale and teaching assistant Diane Wyse in loading up a whaler with supplies for sampling.  The team set out to collect water offshore at 17 m, around the depth that water is brought into the system.  The whaler, one of three available to students through the MLML Small Boats, was equipped with an aluminum pulley system to collect water at depth.

The second stop on the seawater sampling adventure was at the MLML Pumphouse, where unfiltered seawater passes through the instruments of the data acquisition system.  A variety of oceanographic parameters, including temperature, salinity, turbidity, and dissolved oxygen concentration, are measured and shared with the public through the MLML Public Data Portal.

Finally, the sampling team headed up the hill to the MLML aquarium, and collected and pickled water that is pumped in for the marine flora and fauna kept for thesis research and class projects.  The “pickling” step involves addition of reagents to the glass collection bottles before they are sealed to prevent further biological processes from altering the concentration of dissolved oxygen in the sample.  The pickling process was applied in the same fashion, immediately after collecting, to all of the samples taken that day.

Back at the MLML Environmental Biotechnology Lab students performed a Winkler titration to determine the concentration of dissolved oxygen in the samples.   The data from this class experiment can be used to help calibrate the oxygen optodes on the Public Data Portal system. 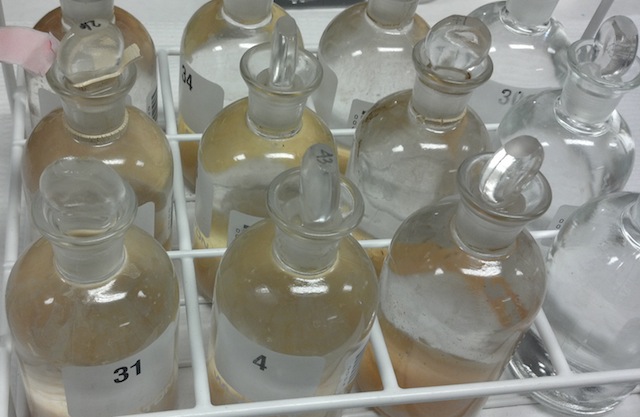