Deep rocky banks and outcrops, underwater pinnacles, and submarine canyons, ranging in depth from 30 m to >1,000 m, are important habitats in California waters. These deepwater habitats comprise 75% of the seafloor in state waters within the Central Coast region, and are home to hundreds of species of fishes and macroinvertebrates. Flatfishes, combfishes, poachers, and eelpouts are the dominant fish taxa on soft sediments, along with invertebrates such as sea pens and seastars. Rocky areas are dominated by more than 40 species of rockfishes and many invertebrate taxa such as feather stars, anemones and gorgonian corals. Although deep habitats on the continental shelf and upper slope contain a high diversity of species that have been fished for decades, far less is known about these habitats and associated communities than those occurring in shallow water. 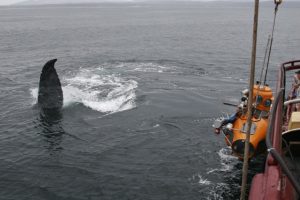 On September 21, 2007, 29 marine protected areas (MPAs) were established off Central California, including two types in deep water: State Marine Reserves (SMR) and State Marine Conservation Areas (SMCA). These MPAs are a result of the 1999 California Marine Life Protection Act that increased protection to coastal marine habitats and species. The creation of this large network of MPAs is a new approach to marine resource management, and has been initiated with a scientific monitoring program that will be used to evaluate the effectiveness of the MPAs and the network.

In 2007 and 2008 we received funding to work with Mary Yoklavich and colleagues at NOAA’s National Marine Fisheries Service to collect baseline data in the deep portions of eight of the new MPAs and associated reference sites. We conducted baseline surveys, using direct observations from a manned submersible, of demersal fishes, structure-forming invertebrates (for example, deepsea coral communities), and associated habitats in those portions of the new system of MPAs on the central coast that are deeper than can be effectively surveyed by shallow-water remotely operated vehicles (ROV) or SCUBA. At each sample site, we conducted quantitative, visual strip transects using the 2-person Delta submersible to characterize seafloor habitats and to identify, count, and measure species of demersal fishes and macro-invertebrates. We also recorded video of each transect from a camera mounted on the exterior of the submersible.

Back to Submersible Surveys