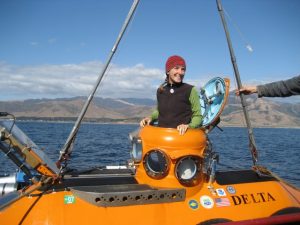 In most ecosystems, the distribution of species across a landscape is greatly influenced by the type, amount and spatial configuration of habitats. Studies in terrestrial environments have shown that species diversity, density and length frequency often positively correlate with the size ofa habitat patch, patch shape and proximity to a patch edge. These patterns, however, have not been conclusively shown in temperate sub-tidal marine studies. Data from visual strip-transects collected from the Delta submersible were used to characterize fish assemblages with respect to rocky bank habitat patches. Specifically, the density, diversity and length frequency of nearshore fishes were examined with respect to 1) proximity to the patch edge, 2) patch shape and 3) patch size near Point Lobos and Point Sur, California. Diversity and length distributions of fishes were significantly greater at the edge than the interior of rocky bank patches. Therefore, landscape-scale patterns with respect to the distribution of bank patches. Therefore, landscape-scale patterns with respect to the distribution of nearshore fishes exist. However, this study also demonstrated that terrestrial paradigms are not directly applicable to temperate sub-tidal marine habitats. The relationship between species richness and patch shape was opposite that of patterns observed in terrestrial systems. Additionally, patch size explained more of the variability in the nearshore fish assemblages than patch shape; however, neither were good predictive indicators of the density of fishes.