MOBY266 has been deployed and is working well.

On Saturday (July 7th) at 10pm we got the email alert that MOBY265 had left the watch circle. It is now at lest 24 nm from the mooring. It has been confirmed that the mooring is still at the MOBY site. The MOBY team is working on getting a ship and divers to retrieve the buoy and tow it back to the mooring. Data acquisition has been turned off on July 8th. I will send another email when the buoy is retrieved and back at the site and data collection has resumed.

On July 10th in the morning the MOBY team found the buoy. It was too far from the MOBY site to tow it back so it was towed to the Pier 35 MOBY tent site and recovered at the dock. 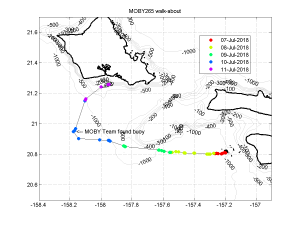 On May 2nd MOBY265 was deployed at the MOBY site and MOBY264 was retrieved.

The buoy was deployed on Aug 2 around noon Hawaii time. Divers removed the arm covers in the afternoon. 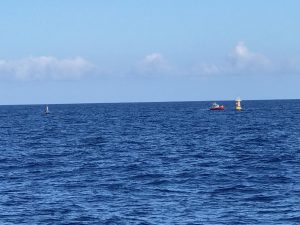 On May 10th the new mooring was deployed. On the 11th MOBY262 was redeployed.  The look good and are available again for download.

To all users of MOBY data.

MOBY decided to take another walk somewhere around 2AM HST on April 13.  Unfortunately this time it took the mooring buoy with it.  In other words, the mooring ground tackle failed, the tether was not cut.  What went on that day is a long story, but I should say a thanks to Zhongping Lee’s group as they forwarded a message from a fisherman that had gone out to fish at the MOBY buoy, but found it wasn’t there.  We had known at that point it was missing, and had a position for MOBY, but didn’t realize the mooring buoy was also loose.  In any case, we have to recover both MOBY and the mooring buoy tomorrow morning.

Unfortunately, because the mooring buoy is not there, we have nowhere to attach MOBY until we replace the ground tackle for the mooring.  We are working on arranging with Mooring Systems, Inc. to get an expedited new system out to Hawaii.  But as you can imagine, a mooring in 1200m of water is not an off the shelf item.  We have a tentative schedule of May 15th as the soonest time the mooring equipment can be in Hawaii, and fortunately the UH ship is available at that time.  So our current schedule is to put the new mooring in at that time, along with redeploying MOBY.

For information, we replace the mooring on a 2-year cycle.  It had gotten replaced in May 2015, and was scheduled to be replaced at the end of June 2017.  In 20 years, this is the first time we have had a mooring failure, but obviously we will be inspecting what we recover tomorrow to try to determine the failure point.

We are obviously sorry for the data loss, and are trying to get the system back and working as soon as possible.

Kenneth Voss and the MOBY Team

On the morning of the 13th of April 2017 the MOBY team began getting warning emails that MOBY had left the watch circle.  It was heading south.  After some report from fisherman is was clear that the mooring was with MOBY.  So we could not just two MOBY back to the mooring site.  We had to recover the mooring and buoy.  A charter fishing boat was paid to go get MOBY and the mooring and anchor it off of Lanai until Saturday when Mark and the rest of the MOBY team could get the KOK out to the buoys and recover them.