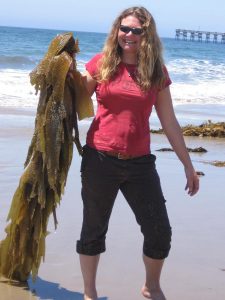 Selena was a project assistant for the California Sea Grant Extension Program and worked on a variety of projects relating to managing data-poor fisheries. She graduated from the University of California Santa Cruz in 2003 where she majored in Marine Biology and was involved in several research projects, including subtidal monitoring for the Partnership of Interdisciplinary Studies of Coastal Oceans (PISCO). After completing her undergraduate degree, she continued her work with PISCO as a subtidal technician. In the fall of 2004, Selena entered the masters program at Moss Landing Marine Laboratories and examined The effects of the subtidal snail Chlorostoma brunnea, on the giant kelp, Macrocystis pyrifera

After graduating from MLML in 2010, she was accepted at the University of Auckland in New Zealand with a full scholarship as a PhD student working with Prof. Kendall Clements in the School of Biological Sciences. Their project examined herbivorous fishes in the temperate and tropical reefs and their hindgut microbial community. It is known that these hindgut microbes are an integral part of the nutrition of their fish hosts as they ferment algal carbohydrates into short-chain fatty acids (SCFA) for use by the fish.  It is unknown, however, a) how much the microbes contribute to the host fish nutrition or b) if these hindgut microbes can contribute nitrogen and/or proteins to the fish. Her project utilized tools such as stable isotope analysis and compound-specific stable isotope analyses (using amino acids) to try and answer these questions. During this project, she was lucky enough to travel to the Great Barrier Reef and work at Lizard Island Marine Research Station. She also collected fish in the Hauraki Gulf near Auckland, which, although is missing Macrocystis pyrifera, is still a lovely kelp-dominated temperate reef.  Throughout her PhD program, she had had the opportunity to teach several undergraduate labs and field-based courses. She enjoyed teaching, and the research and is grateful that she was able  to live and travel in New Zealand.

In 2017 Selena took a job with Reef Check, where she now works as the Southern California Regional Manager.