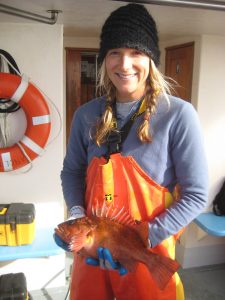 After completing her Master’s degree in 2010, Kristen moved to Sitka, Alaska, to work for the Alaska Department of Fish and Game as the Southeast Alaska Groundfish Project Leader, and where she led the management and research activities for the region’s commercial Groundfish fisheries for six years. She was recently admitted to the Emmett Interdisciplinary Program in Environment and Resources  at Stanford University, and began a PhD program there in fall 2016.