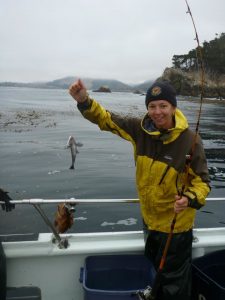 were tagged with acoustic tags in the Monterey Canyon. The movements and activity patterns of 10 female and 5 males were examined using manual tracking and acoustic monitoring techniques. One female and 2 male sharks were tracked manually for 51.8, 61.0, and 62.8 h. Occurrence of those sharks and one other female was recorded for 101.2 - 123.6 d. An array of non-overlapping receivers extending 3.5 km offshore recorded the occurrence of five females and 3 male sharks for 400 - 561 d. Also, 3 female sharks were tagged with archival transmitters. All tagged sharks demonstrated a pronounced diel movement pattern, moving offshore to discrete areas during day and moving inshore along the axis of the canyon and actively swimming off the bottom at night. Subadult prickly sharks tagged in this study were present in the upper reaches of the Monterey Canyon during all four seasons. This work resulted in a publication in the Marine Ecology Progress Series.

Cyndi joined the Ocean Protection Council (OPC) in September 2014 and is an experienced marine ecologist with her past work focusing on nearshore ecology, marine protected areas and sustainable fisheries management. In her most recent position as an Environmental Scientist with CA State Parks she was tasked with balancing the impacts of recreational uses with the conservation and restoration of Asilomar State Beach’s extraordinary natural resources. Before joining State Parks in 2012, Cyndi received her B.S. in Biology from Humboldt State University and her M.S. in Marine Science from San Francisco State at Moss Landing Marine Labs. Her graduate research used acoustic telemetry to determine habitat use patterns of prickly shark in the Monterey Canyon. She has worked as a Marine Biologist for CA Department of Fish and Wildlife and as the Director of Science of Reef Check California. A focus of Cyndi’s past positions has been helping diverse stakeholders to understand and use science to address complex ocean management issues. Her current role as the Marine Protected Area Policy Advisor for the Ocean Protection Council focuses on working with a diverse range of agency and non-agency partners to support effective management of CAs network of MPAs.