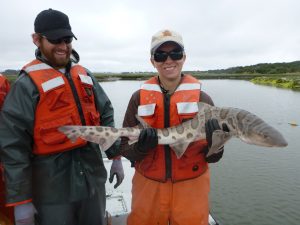 Andrea Launer's thesis focused on sex-specific distributions of leopard sharks in Elkhorn Slough, California which she completed in 2014. Estuaries are used seasonally by many elasmobranchs for reproduction and as nurseries. The character, location, and availability of elasmobranch habitats in estuaries are often altered by anthropogenic activities and environmental changes. These habitat changes may have different effects on groups within a shark population because sexspecific segregations are common for many elasmobranchs. Leopard Sharks (Triakis semifasciata) are important estuarine predators in California and exhibit sexual segregations. Movements of 13 Leopard Sharks (male n=6, female n=7) tagged with coded acoustic transmitters were monitored from March 14, 2013 to March 9, 2014 using moored receivers in Elkhorn Slough, CA. Movement patterns were compared by region within Elkhorn Slough and related to environmental variables. Tagged individuals of both sexes spent the majority of time in the middle section of Elkhorn Slough, though females were more frequently present early in the day and uncommonly recorded after noon; males consistently used the middle section of Elkhorn Slough throughout the day. The monthly number of hours male Leopard Sharks were detected in the study site was positively correlated with water temperature and female Leopard Shark detected hours were negatively correlated with dissolved oxygen concentration. Differences in frequency of detection at temperatures ranging from 13°-16° C were dependent on sex and region of Elkhorn Slough.

Since 2015, Andrea has worked for the Oregon Department of Fish and Wildlife (ODFW) on a number of projects, both on the Columbia River and in the nearshore commercial fishery.  Currently, Andrea is the Assistant Project Leader for the Columbia River Investigation. 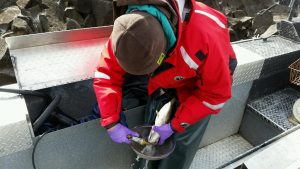 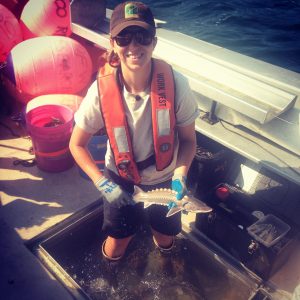