The FCB Lab has partnered with The Nature Conservancy (TNC), Monterey Bay Aquarium Research Institute (MBARI) to develop a new video survey tool dubbed the Benthic Observation Survey System (BOSS) which is a light-weight, rapidly-deployable video lander to survey rockfish populations along the US. West Coast.

This work expands upon our previous rotating video lander design. The BOSS has increased sampling capabilities due to its streamlined design and decreased time spent on the seafloor- all while maintaining close to full video coverage around the lander. The BOSS is equipped with 4 sets of stereo-paired, HD-prosumer cameras, Deep Sea Power and Light (DSPL) LED lights, DSPL down camera, and a load-bearing fiber-optic cable that facilitates quick deployments and real-time monitoring of surveys. It can be deployed up to 400m. After completion of a cruise, the videos from the 4 stereo pairs of cameras are synced together and analyzed back at the lab. For each identifiable species, a max N, density, and average length are determined. These measurements can then be analyzed to determine any significance in the number of species or abundance of species at differing sites. 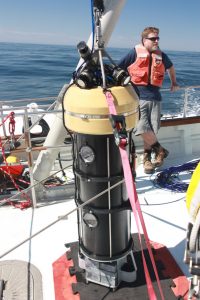 Background: The diverse array of groundfish species, including rockfishes (genus Sebastes), and Lingcod (Ophiodon elongatus), are some of the most important species of fishes for commercial and recreational fisheries along the U.S. West Coast. These species have typically been managed using data obtained by trawl gear; however, trawling is conducted in low-relief habitats to avoid gear loss and avoids high-relief rocky habitats that many groundfish species prefer. It is therefore important that new fish survey techniques be developed to reach these deep, rocky reef areas. While more sophisticated techniques such as Human Operated Vehicles (HOV) or Remotely Operated Vehicles (ROV) can effectively survey rocky habitat, these tools are relatively expensive and logistically difficult to use. Video lander tools have been gaining traction as an effective means to survey rocky habitat and have been increasingly used in both tropical and temperate ecosystems. Landers are easily deployed from vessels of varying sizes and can cover large spatial areas. In 2012, the rotating Lander was built by Marine Applied Research and Exploration and conducted over 1000 visual surveys between 2013 and 2015.

In the fall of 2017, the FCB lab participated in the NMFS Untrawlable Habitat Strategic Initiative (UHSI) at the Channel Islands in southern California. Specifically, a 2 camera prototype of the BOSS was deployed at Footprint SMR to assess fish behavioral responses to this tool.

After the final version of the BOSS was completed in 2018, we spent 24 days at sea surveying the California coast in Fall 2018. We conducted 420 surveys and collected 30 hours of video. For more highlights, check out our blog post!

In June 2019, the BOSS was deployed at Portuguese Ledge, Monterey, CA, to evaluate inter-daily variations in fish densities estimated from video surveys. The results of this cruise indicated that the estimated average density of fishes were not different among days.

In Feb 2020, March 2021, and June 2021, we took the BOSS to the Channel Islands to build upon a survey of mid-depth marine communities at San Clemente Island from 2012-2015. The data from this cruise will be used to measure the ecological changes at SCI against the data collected by the previous survey. San Clemente Island has been owned and managed by the United States Navy since 1934. Access to certain areas around the island are highly restrictive or even prohibited, leading to de facto marine protected areas around the island. The deployment of the BOSS in this area offers a unique opportunity to study the ecological consequences of de facto marine protected areas. We are currently in the process of analyzing those videos and are excited to see the results! 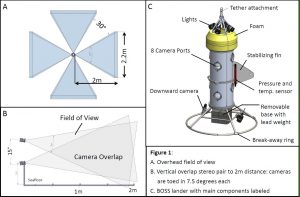 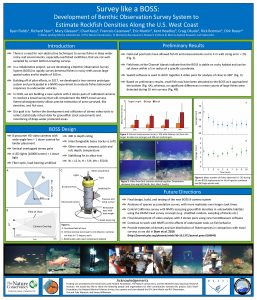 Check out these photos of the BOSS in action!