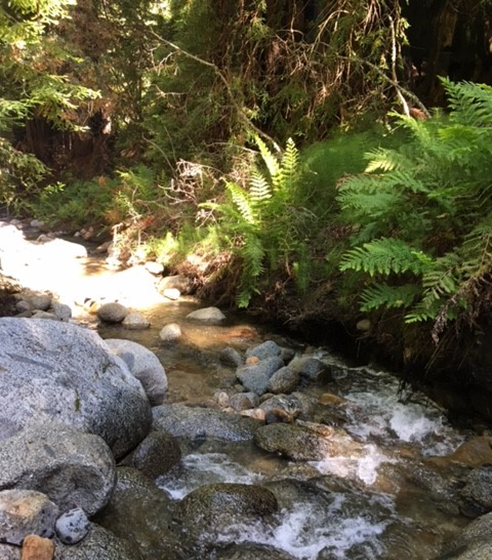 To wrap up our coverage of the Habitat Mapping class projects, this week's post walks us through an investigation of the ways in which wildfires can impact both the physical condition of streams as well as the associated invertebrate community. Small invertebrates which live in the riverbed are closely linked to the sand itself. The size, shape, and composition of the sand --and therefore any changes to those conditions-- can directly affect the collection of animals found in a given stream.

Their class project explored changes in streambed characteristics resulting from one wildfire of interest: the 2016 Soberanes Wildfire. Burning throughout Monterey County, it was the most costly wildfire in U.S. history at the time, and it destroyed dozens of homes. Garrapata Creek, Soberanes Creek, Rocky Creek, and Big Sur Creek flow through the affected area, making them important streams for post-fire analysis.

As California’s wildfires become more frequent and devastating due to climate change, environmental scientists must investigate how these fires affect the persistence of healthy ecosystems.

Not only are soil, plant life, and air quality altered, but river systems within fire boundaries can be flooded with ash and sediments that impact downriver benthic (riverbed) habitats. As the river continues to flow, this matter can be transported far beyond where the fire itself burned and carried out to where the river meets the ocean, resulting in unknown consequences to aquatic life. The loss of riparian habitats --such as leaf matter and woody debris from local trees-- and sediment transport may affect habitats downstream from the fire by altering ecosystem functioning and flow regimes.

As the riverbed itself changes, it in turn causes changes in the communities of benthic macroinvertebrate (BMI) communities, which include small aquatic animals and the aquatic larval stages of insects. For example, the loss of terrestrial-derived nutrients in the form of leaf litter may cause turnover among BMI communities. In the case of fires, increases in fine sediments or the introduction of ash may reduce available habitat for some species of BMI. Because they are relatively easy to sample and respond quickly to changes, BMI's are an excellent  study system for examining the effects of wildfire.

We used a Phantom 4 drone to take high resolution images of several streambeds over a two- month period from September to November 2018. These images were post-processed in Pix4D, a “photogrammetry” (photography and mapping) program that allowed us to measure changes in the overall topography of the stream. We analyzed the change in sediment fluctuations around the coastal drainage areas using the photogrammetry taken during the fall of 2018. Our goal was to compare already-occurring natural variations in streambed morphology to data from before the fire. In addition, we used previously collected Surface Ambient Water Monitoring Program (SWAMP) data for upstream portions of these rivers to observe changing trends in sediment size. We were also able to compare pre- and post-fire BMI populations for Soberanes Creek.

Results from our study supported the hypothesis that there may have been changes caused by the wildfire for both the BMI community and the stream’s physical habitat. Our results from the pebble counts taken during the SWAMP surveys, pre- and post-fire, suggest that Soberanes Creek, Rocky Creek, and Big Sur River have all experienced a decrease in grain size after the fire. An example of this is at Rocky Creek, where grain size prior to the fire was greater than 350 mm. Post-fire, there were only pebble sizes less than 200 mm, indicating finer sediment sizes after the wildfire. This may suggest that the fire has increased erosion within the watersheds.

It was important to see how the benthic habitat and invertebrate communities responded to the fire, so we gathered invertebrate data from SWAMP at Soberanes Creek. We found a decrease in Stonefly and Mayfly BMI following the fire. This suggests an overall decrease in diversity among all BMI communities. Losses in diversity can often make a system more fragile, as there is no similar species to replace another that is lost. If a species that is lost performs an important function, that function is lost entirely from the system.

In addition, invertebrates are often sorted by their diet preferences (think omnivore, carnivore, vegetarian for a human equivalent) which are called functional feeding groups. Within the functional feeding groups, there was a significant decrease in shredders (invertebrates that mostly eat vegetation) and an increase in predators (invertebrates that feed on other organisms). We expect that the loss of shredders corresponds to the loss of leaf litter and subsequent fluctuations to coarse particulate organic matter (CPOM), fine particulate organic matter (FPOM), and dissolved organic matter (DOM). Essentially, when the bottom cover changes, the community responds.

We were able to complete a preliminary analysis using orthoimagery. Our analysis suggested that there was an increase in sediment deposition during the season. We hope that the collected drone imagery may be compared with pre-fire orthoimagery to compare the extent of sediment deposition. In addition, our results suggest a significant change in functional feeding groups that may have had a significant impact on the benthic community.

We would like to thank the Moss Landing’s Marine Benthic Habitat Mapping Class as well as the California State University at Monterey Bay’s Watershed Ecology and Environmental Lab for assistance with fieldwork and the processing of data.

USGS. (2017, September 7). Increases in Wildfire-Caused Erosion Could Impact Water Supply and Quality in the West. Retrieved December 17, 2018, from
https://www.usgs.gov/news/increases-wildfire-caused-erosion-could-impact-water-supply-and-quality-west-2