Today, we have another post courtesy of MS 211: Ecology of Marine Mammals, Birds and Turtles, this time from Moss Landing student and author Jenni Johnson. She is going to talk about the hectic but rewarding work involved in elephant seal research at Año Nuevo State Park. -Amanda Heidt Blog Manager 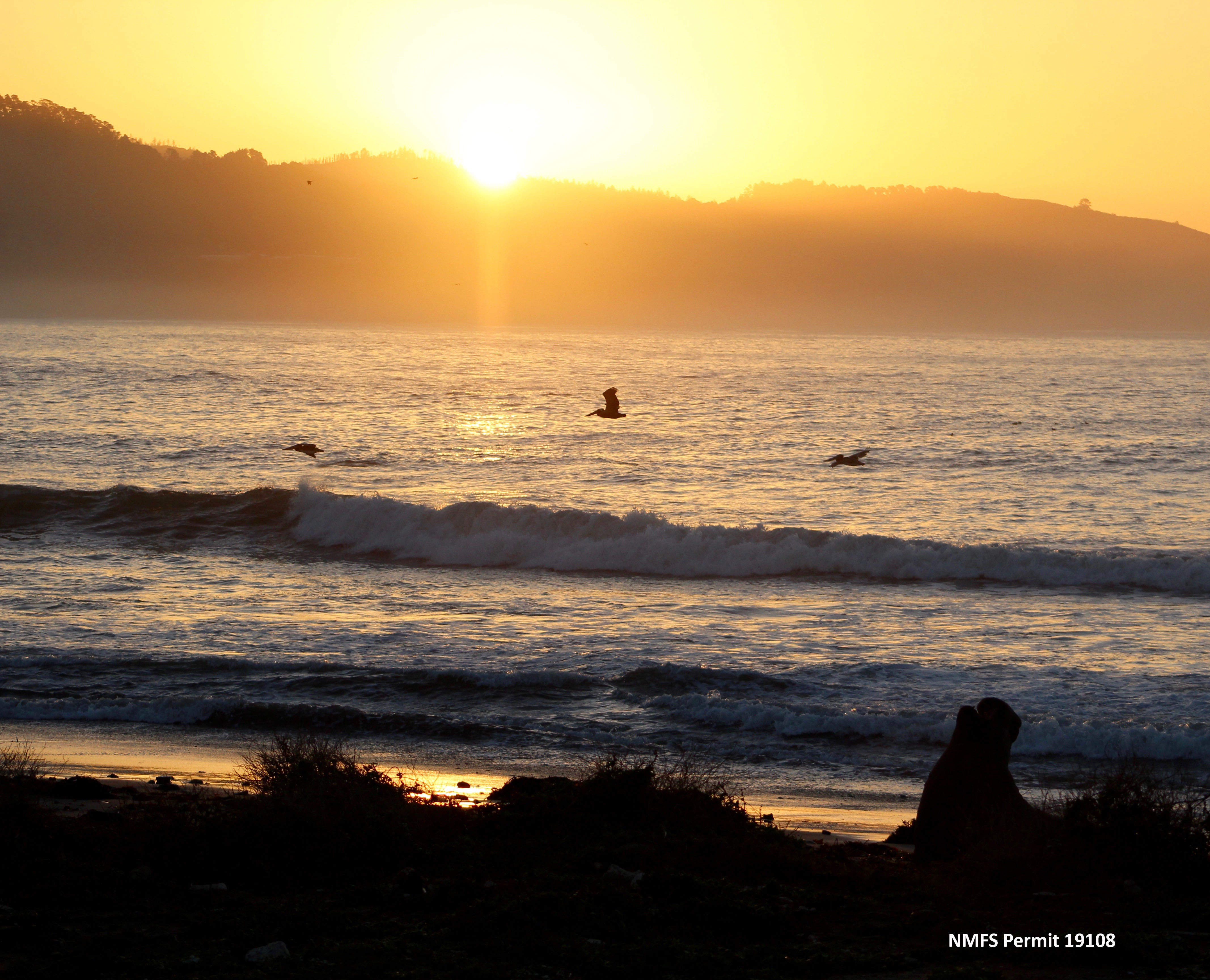 Twenty minutes later the truck pulls into the entrance of Año Nuevo and turns right down the limited access road. The progression is slow as we carefully survey the dirt road for endangered San Francisco garter snakes. I take this opportunity to observe the magnificent landscape, hoping to catch a glimpse of deer, coyotes, bobcats, or the elusive cougar. Alas, no such luck today. Instead, I admire the soft glow of the early morning light and the captivating shades of pink and orange spilling across the sky, signaling the eminent arrival of the sun. I feel excitement start to build as we park the truck.

Grabbing the gear, we hike to the beach, maneuvering through streams, marshes, and dunes along the way. Various animal tracks crisscross over the sand, reminding me that I am merely a guest. The elephant seal calls fill my ears, and I know we are close. We emerge onto the beach as the sun makes its morning debut atop the Santa Cruz Mountains and casts light onto the awe-inspiring scene before us. Pelicans and cormorants congregate on the western point, paling in comparison to the demanding presence of the elephant seals. Nursing females, defensive bulls, dozing juveniles, and curious weanlings cover the beaches and play in the surf. We appreciate this scene for only a moment before setting off to find our first weanling. 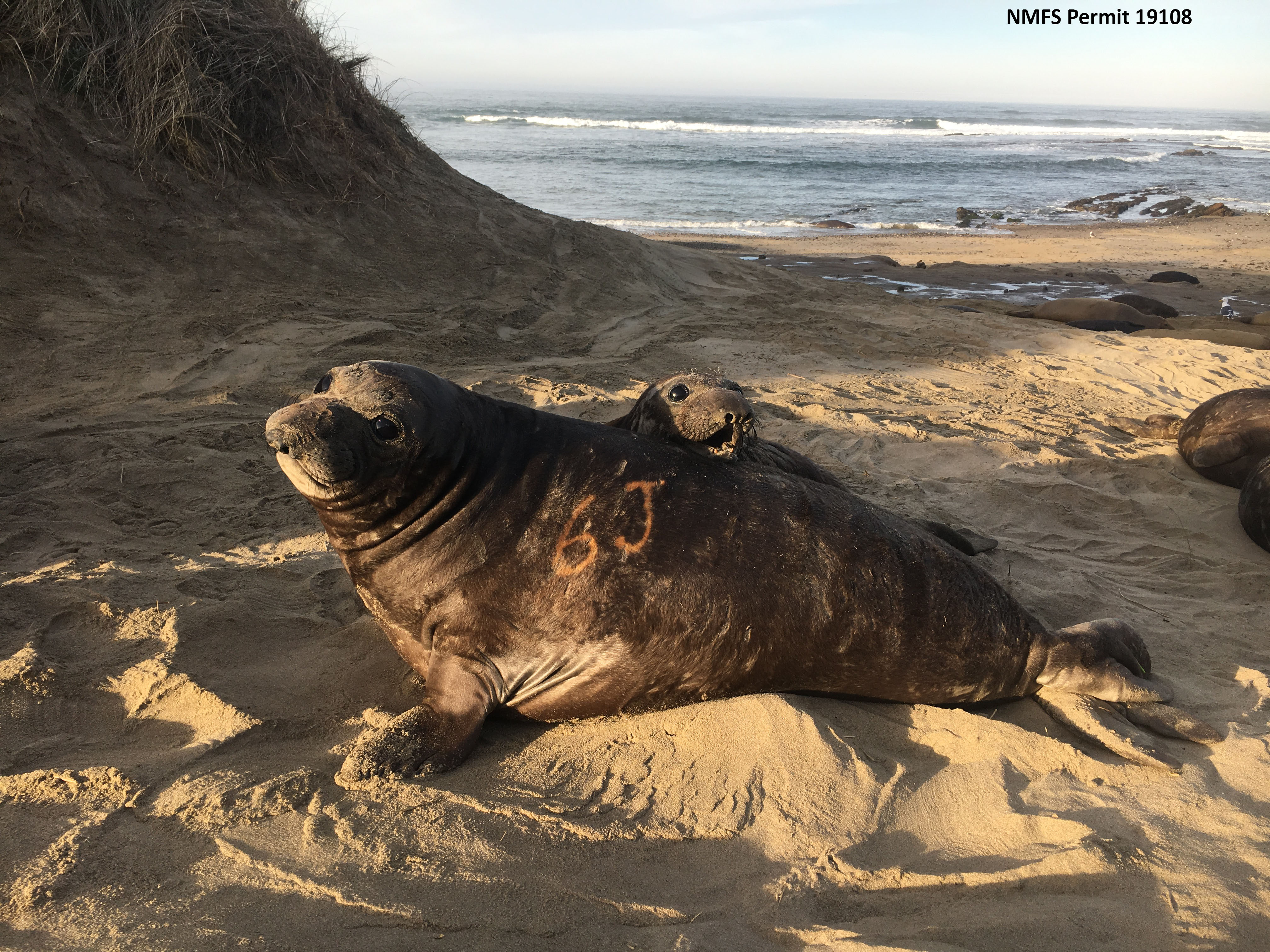 One group begins to set up the tripod, attaching the scale and come-along winch to the tripod before anchoring its feet into the sand. Meanwhile, I am tasked with capturing the weanling. For this, a custom-made canvas bag is used to help protect the seal and the researchers as we collect our measurements. Rolling back the seam of the bag, I slowly creep toward the weanling. Suddenly aware of my presence the weanling raises its head to maintain visual contact. Using this to my advantage, I swiftly sweep the bag onto its head. Another researcher steps in and together we carefully wrestle the seal into the bag taking extra care not to harm its flippers. In the process, we expose its belly and identify the sex as male before securing the bag. With impressive coordination, three people position the tripod over the weanling while I connect the bag to the come-along winch via a metal weigh bar. I crank the winch lever slowly lifting the seal until he is completely suspended, record his mass, and then immediately lower him to the ground. Once the weigh bar is removed, the tripod is moved while two of us continue to collect body measurements and a fur sample. Next, we add green flipper identification tags. Two tags are inserted to indicate he has been measured and weighed. Finally, I release the weanling from the bag and estimate percent molt as he galumphs across the sand. Despite what it may seem, the process lasted only ten minutes. 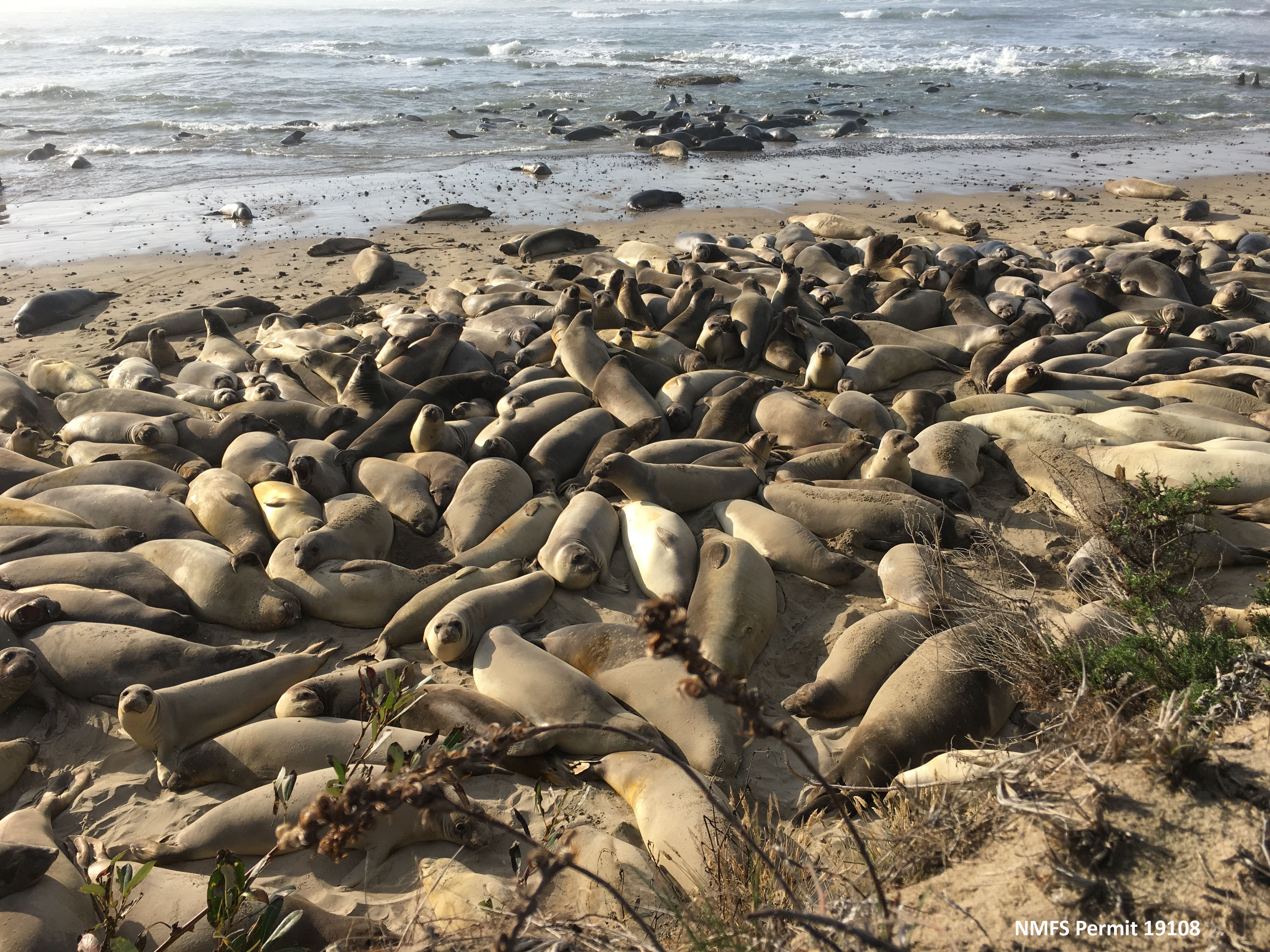