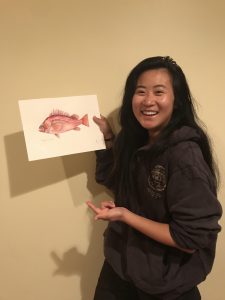 Grace attended Westmont College in Santa Barbara, CA.  She graduated in 2018 with a B.S. in Biology (emphasis on Ecology, Evolution, & Natural History) and a minor in English.

After graduating, Grace stuck around for another year in Santa Barbara county to work as a Scientific Aid for the California Department of Fish & Wildlife project known as California Recreational Fisheries Survey (CRFS).  As a CRFS sampler, Grace interviewed recreational anglers, collected biological information on local finfish catch, and recorded data aboard sportfishing vessels.

Within the first few months of working for CRFS—spent covered in rockfish scales and halibut slime—Grace decided she wanted to pursue a lifelong career as a marine scientist.  She joined the Ichthyology Lab in Fall 2019 in hopes of learning more about anthropogenic impact on fish species of recreational and commercial interest.

In her spare time, Grace enjoys channeling inspiration from the field into poetry and painting.