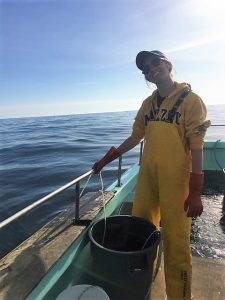 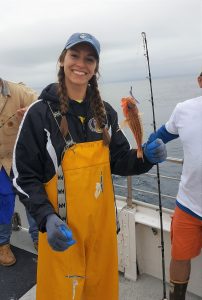 Holly graduated from the University of Missouri – Columbia (MU; MIZZOU) in 2016 with a B.S. in Biological Sciences. During her time at MU, Holly worked under the guidance of Dr. Elizabeth Bryda in her Comparative Medicine lab at the MU College of Veterinary Medicine. During her early time as an undergraduate researcher, Holly investigated the effects of husbandry stress on the behavior of zebrafish (Danio rerio), in hopes to illuminate any husbandry or handling bias that may confound the results of other stress studies. For her senior capstone project, Holly also studied the effects of exposure to a common brain parasite (Pseudoloma neurophilia) on the behavior of larval zebrafish. Apart from these projects, she also assisted then PhD student Daniel Davis, with his research investigating the ability for a common probiotic (Lactobacillus plantarum) to mitigate stress-induced dysbiosis in the gut microbiome of adult zebrafish.

Holly began the Moss Landing Marine Laboratories (MLML) Masters program in the fall of 2016, initially joining the Biological Oceanography Lab. However, in April of 2018 she switched to join the Ichthyology Lab after realizing her interests were better suited studying marine fish. For her thesis, Holly is investigating the effects of projected upwelling conditions (specifically ocean acidification and hypoxia) on the comparative gene expression of juvenile black (Sebastes melanops), copper (S. caurinus) and gopher (S. carnatus) rockfish from the central California coast. Apart from this project, Holly’s research interests include determining the effects of increased climate change stressors on the immunology of marine fish communities.

As a part of her thesis project, Holly is also a member of the Logan Lab at California State University – Monterey Bay (CSUMB) under the co-mentorship of Dr. Cheryl Logan. Since joining both labs, she has thoroughly enjoyed being able to help on other lab and thesis projects both at the bench and in the field.

When she’s not in the lab, you might find Holly working as a Naturalist/Deckhand for Sea Goddess Whale Watching in Moss Landing, CA. She also enjoys hiking, swimming, crafting and adventuring with her two pups in her spare time!